Dumplings 101: 5 must-try Asian dumplings – and where to find them in Macao Link copied

You can find all kinds of dumplings in Macao but few actually originated here. From gaau-zi to gyoza, we track the stories behind the region’s most common dumplings, so you know where your favourite bites come from. As a historic trade port and hub of cultural exchange, Macao has long been a melting pot of culinary flavours. In 2017, Macao was named a UNESCO Creative City of Gastronomy – a credit to the diversity of the city’s food offerings.

Among the imports? Dumplings – a broad category of food that typically features a dough-based wrap that’s baked, boiled, fried, deep-fried or steamed and filled with various ingredients. In Chinese, when we say “吃餃子” – or “eat dumplings” – we generally think of boiled dumplings in Macao. But there are so many types of dumplings across Asia, many of which we can experience at restaurants and cafes across the city thanks to centuries of trade, tourism and globalisation.

Many countries – such as China, Korea, Japan, Turkey, Iraq, Iran – claim to have created the first dumpling, but it’s unclear exactly when and where they surfaced. According to Chinese National Geography, Turkey, Iraq and other western Asian regions would have been the most likely origin. They were the first to cultivate wheat – a main ingredient in some dumpling wrappers – as well as techniques to grind wheat into flour.

In China, the Shang Dynasty is thought to have introduced dumplings sometime between 1600 and 1046 BC, after discovering them through trade. Regardless of who whipped up the very first dumpling, the dish is thought to have spread along the Silk Road. And today, it remains a ubiquitous comfort food across Asia – adapted amongst societies and cultures to suit their local tastes, ingredients and diets.

Thanks to our international culinary scene in Macao, we can try countless types of dumplings, each with its own unique style. Here are a few of our favourites and the stories behind them: Eaten in Macao for breakfast, lunch or dinner no matter the season, gaau-zi are shaped like little gold ingots, with a thin skin and a flavourful filling – be it shrimp, pork, beef, lamb, or vegetables. While common in Macao, the dumplings actually originated in mainland China.

According to folktales, Zhang Zhongjing, one of the most important Chinese doctors and writers during the Eastern Han Dynasty, invented gaau-zi as a medical remedy. As the story goes, he wrapped anti-cold medicines in dough to cure diseases and to treat inflammation.

As time went on, people in mainland China, especially in the north, began to make gaau-zi during Chinese New Year, believing the dumplings could bring them health and wealth. Between trade and migration, gaau-zi eventually made their way south from mainland China to Macao. Today, we enjoy these steamed bites during important festivals, such as the Winter Solstice and the Lantern Festival, or really anytime we have a craving.

Where to try them in Macao: Shun Shing King of Dumplings

Head over to one of Shun Shing King of Dumplings’s three branches. Owned by the New Loyal Group, the restaurant is known for its high-quality gaau-zi which receive great reviews online.

One of Japan’s most famous international exports, gyoza tend to resemble crescent moons. They have a unique texture, which comes down to the cooking method: They’re first fried in a pan, creating a brown crispy bottom and a lace-like fried dough for texture, then steamed to perfection. As for taste, the most common filling comprises a mixture of pork, garlic, chives, cabbage, ginger and sesame oil.

There’s a somber story behind these universally beloved dumplings. During and after World War II, many Japanese suffered from a severe famine. Pork dumplings became a practical solution for many families, since ground pork was one of the most affordable meats at the time.

What’s more, many Japanese soldiers were stationed in China during the war, where they ate dumplings regularly. When they returned to Japan, some opened dumpling shops which helped the gyoza retain its popularity in the decades to come.

Where to try them in Macao: Ramen Kouji

As one of the highest-rated Japanese ramen shops in Macao, Ramen Kouji not only serves up the best ramen in town but also has a reputation for its crispy, juicy gyoza. With branches in both Macao and Taipa, the restaurant is managed by a Japanese chef who has overseen the menu since day one.

A popular late-night snack in South Korea, mandu dumplings come in various flavour combinations from tofu to shrimp, vegetables, beef, pork, kimchi and more. The most traditional version looks like a round, plump half-moon – often filled with pork or beef, plus kimchi – and can be steamed, boiled, deep-fried or cooked in soup, among other methods.

Although it’s unclear how mandu emerged in South Korea, experts believe they made their way from Turkey and Central Asia to Korea by way of China during the Silk Road era. According to legend, Chinese politician and military leader Zhuge Liang led his army across a river during China’s Three Kingdoms period (220-280 AD). Unfortunately, the river was full of dead souls and in order to calm them, he had to sacrifice a human head.

Zhuge didn’t want to kill anyone, so he asked a soldier to make a wheat wrapper, fill it with meat and present it as a “head” to satisfy the ghosts. The creation earned the nickname “man-tou”, which literally means “barbarian head”. Some believe that the Mongol-ruled Yuan Dynasty later brought mandu to South Korea during an invasion in the 14th century, while others argue they more likely spread to Korea via trade.

Where to try them in Macao: Arirang Restaurant

When it comes to Korean cuisine, Arirang Restaurant is often the first place that comes to mind for Macao diners. The Korean-owned restaurant offers flavourful mandu dumplings alongside Korean barbecue. 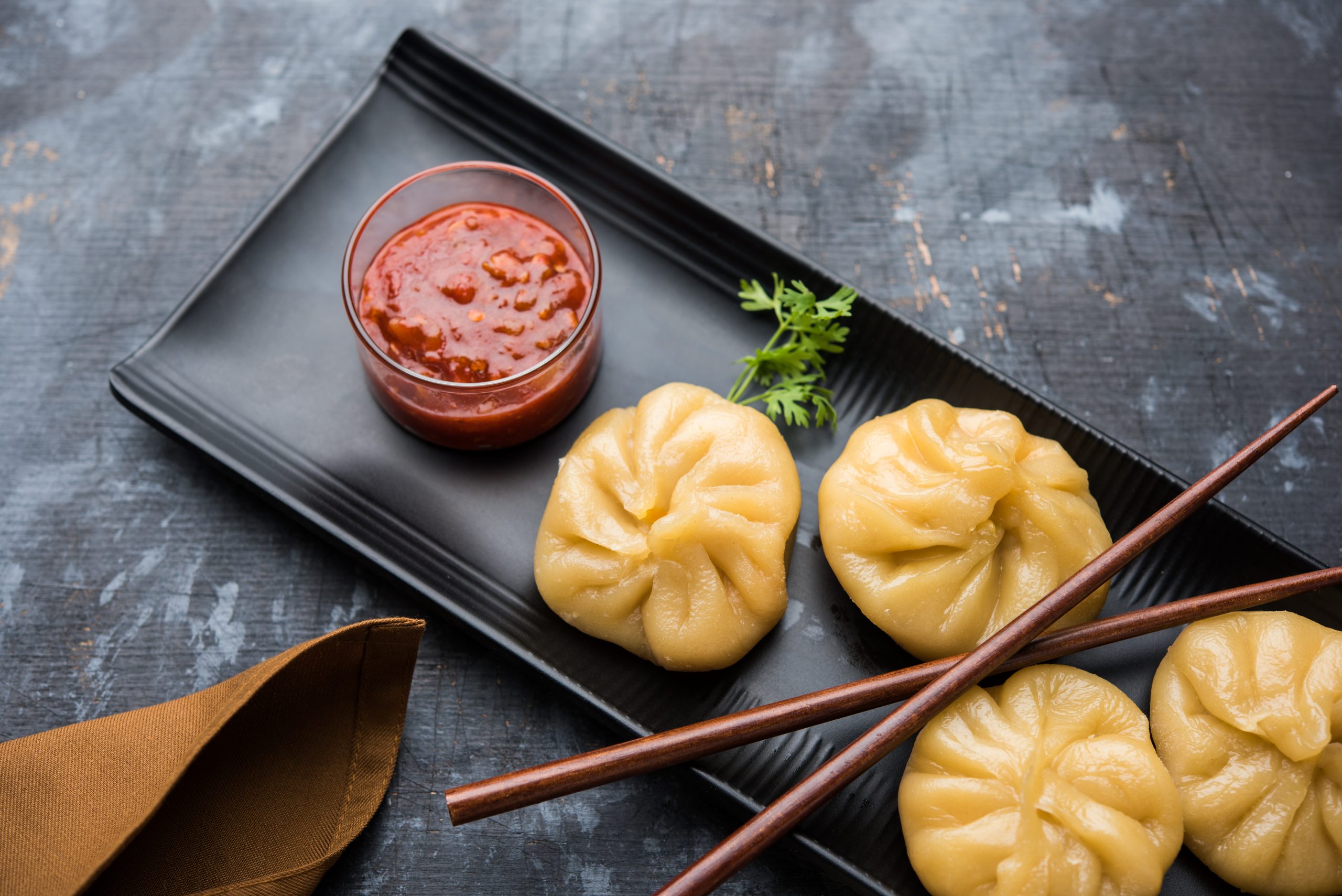 In Nepal, momo dumplings are one of the most representative, quintessential local dishes. The name ‘mome’ means ‘cooking by steaming’ in Newari – one of Nepal’s oldest languages – but you can also find steamed, fried or deep-fried varieties.

Flavours vary too, though the crescent-shaped dumplings are traditionally filled with ground meat such as chicken, mutton or pork, alongside curry powder (also called ‘momo masala’), tomato, onion, coriander, ginger, and garlic. These days, tofu, paneer cheese and vegetables are just as common.

How did momo come to be? According to Slow Food, a global organisation dedicated to preserving local food cultures, momos are believed to have emerged in the 14th century, first in the Kathmandu Valley then later in India, Tibet, China and farther afield.

Where to try them in Macao: The Himalayan House Macau

Specialising in Nepalese and Indian cuisine, The Himalayan House serves everything from creamy butter chicken to palak paneer, tikka masala and juicy chicken momo. With two branches in town, the eatery is a great choice for dining with friends or family at an affordable price.

Deep-fried and delicious, samosas are a common starter or snack in many parts of Central and Southeast Asia, the Arabian Peninsula, the Mediterranean and Africa. Here in Asia, samosas are most often associated with India, where these pyramid-shaped, deep-fried dumplings tend to be filled with spiced potatoes, onions, peas and lentils, then served alongside coriander mint chutney.

Depending on the region, you might also see ground meats, such as mutton, pork or chicken.

While they’re everywhere these days, samosas made their way across the world over many centuries.

The word samosa can be traced to the Persian word ‘sanbosag’, as it originated in the Middle East and spread to India. From there, immigration, globalisation and cultural penetration elevated the dish’s proliferation around the world.

Where to try them in Macao: Indian Spice Macau

Located in NAPE, Indian Spice Macau restaurant attracts a steady flow of loyal diners, many of whom head over for curries, chicken and samosas after work. Filled with potatoes and nuts, the restaurant’s samosas are especially delicious, and vegetarian-friendly, too.