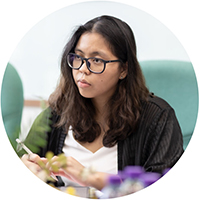 Rafelle grew up in Hong Kong and Macao. She spent her first eight years in Hong Kong before settling down in its sister SAR, however she has also lived in the Philippines, previously graduating from the University of the Philippines Cebu. Here, she developed an interest in investigative writing, infographics and screenplay writing and later became a journalist in Macao.

Having a ball: Why is table tennis so popular in Macao?

Table tennis is red-hot in Macao. We take a look at how the sport has grown from European import to a favourite pastime of thousands of local residents.

Looking for something to stream? These Korean series offer captivating performances and clever writing, with insightful social commentary.

Elegant and lavish gift hampers to ring in the Year of the Tiger with delectable flavours, classic treats, and plenty of holiday cheer.

How music therapy helps people in Macao heal and grow

Music has been proven to benefit those suffering from a range of mental and physical concerns. In Macao, therapist Christal Chiang brings the practice to the city’s elderly and children.

The best New Year’s Eve parties in town, from sumptuous Champagne countdowns to understated dining experiences – there’s something for every kind of reveller.

Literature and music have greatly influenced veteran educator Shelley Grace Calangi. Now a children’s author, she is passing on her life lessons, everyday observations and good humour in the form of poetry.

How a Mozambican superfood brand made its mark in Macao

Ekithi superfoods specialist links Macao with Mozambique and is building a greener, more prosperous future for its farmers.