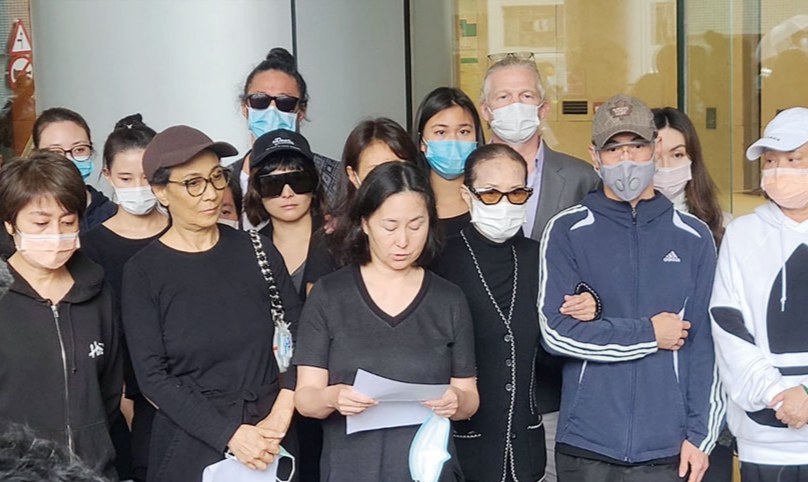 His daughter Angela Ho Chiu Yin told reporters that her father died at the hospital at 1 p.m.

“Although we knew the day will come, it does not ease our sorrow,” said Angela Ho, who was surrounded by members of the large family.

Stanley Ho, born into a Eurasian family in Hong Kong on November 25, 1921, is survived by three of his wives and 14 of his 16 children, according to a statement by the bereaved family.

Angela Ho said her father died peacefully in his sleep at the hospital where he had stayed for prolonged periods of time in the past decade or so.

“With profound sadness, we, on behalf of his deceased wife, Clementina Leitão Ho, of his surviving wife, Lucina Laam King Ying, third spouse Ina Chan Un Chan and fourth spouse Angela Leong On Kei, and all his children and grandchildren, jointly announce the passing of our beloved patriarch, Dr. Stanley Ho Hung Sun. Surrounded by all his family members, Dr. Ho passed away peacefully at the Hong Kong Sanatorium and Hospital on 26 May 2020 at the age of 98.”

The statement also said that “Dr. Ho was a larger-than-life figure whose unparalleled vision, entrepreneurial spirit, resourcefulness and fearlessness were widely recognised and well-respected. To us, he was and forever will be our inspirational role model. He had passed on important values to us. He taught us to see possibilities in new and uncharted territories, to embrace challenges with tenacity and resilience, to be compassionate and empathic, to give back to society, to appreciate our cultural heritage and, most of all, to be patriotic to our country.”

The statement included a list of his direct family members, including his late wife Clementina and two late children Jane Francis and Robert.

Stanley Ho was the co-founder of Macau’s gaming company STDM which ran the city’s casinos under a monopoly concession granted by its then Portuguese administration in 1962 until 2002 when the government of the Macau Special Administrative Region (MSAR) liberalised the gaming industry. STDM’s gaming operations were transferred to SJM, which was also headed by Stanley Ho. SJM is now one of Macau’s six rival casino operators.

Stanley Ho retired gradually from his role as Macau’s “king of gambling” (“dou wohng”) after an accident at his home in Hong Kong in 2009. Macau’s Portuguese-speaking community endearingly called him “Tio Stanley” (“tio” means “uncle” in Portuguese).

Stanley Ho was a great-nephew of one of Asia’s first tycoons, Robert Hotung, an influential Eurasian businessman and philanthropists who was among Hong Kong’s wealthiest residents at the turn of the 20th century.

Stanley Ho was descended from great-grandfather Charles Henry Maurice Bosman (1839–1892), who was of Dutch Jewish ancestry, and his Chinese partner Sze Tai from present-day Shenzhen.

Stanley Ho’s studies at the University of Hong Kong were cut short by the outbreak of World War II. He moved to Macau in 1942.

Meanwhile, Chief Executive Ho Iat Seng on Tuesday expressed his profound sorrow over the passing of Stanley Ho and extended his deepest condolences to the bereaved family, according to a statement by the Macau Government Information Bureau (GCS) last night.

In the letter, the Chief Executive said that Stanley Ho had devoted his life to charity and public welfare issues and “made significant contributions to Macau’s stability and prosperity”.

Macau’s first chief executive, Edmund Ho Hau Wah, also sent a letter of condolences to Stanley Ho’s family. Edmund Ho, who is attending this year’s session of the National Committee of the Chinese People’s Political Consultative Conference (CPCC), said in the letter that he was saddened by Stanley Ho’s passing, according to a GCS statement.

The Central People’s Government Liaison Office in Macau expressed its condolences in a statement last night. The statement praised Stanley Ho as a “patriotic entrepreneur from Hong Kong and Macau”. The statement said that the office sent a message of condolences to Stanley Ho’s bereaved family on Tuesday.

According to the statement, Stanley Ho devoted his life to the country and actively promoted the smooth implementation of the “One Country, Two Systems” principle. The statement also praised Stanley Ho for his contributions to Macau’s smooth return to the motherland and the nation’s prosperity and national rejuvenation.

Stanley Ho visited Macau for the last time on December 20, 2009, for the 10th anniversary celebrations of the establishment of the Macau Special Administrative Region (MSAR) where he was warmly greeted by the nation’s then president, Hu Jintao.

Stanley Ho is widely seen as the prime mover behind the emergence of Macau as an international gaming and tourism destination since the 1960s. He signed the first contract of Macau’s casino monopoly concession at Portugal’s Overseas Ministry in Lisbon on March 30, 1962. His Sociedade de Turismo e Diversões (STDM – Tourism and Amusement Company) ran Macau’s casinos as a monopoly between 1962 and 2002, after which STDM’s newly formed associate SJM took over the former’s casinos within the framework of Macao’s liberalised gaming industry.

In the 1962–2002 period, due to its overwhelming position in the local economy, STDM was regarded by some observers as a “company with a territory” (instead of a “territory with a company”) while others said that “what is good for STDM is good for Macau.”

Macau’s first casinos were licensed by the government in 1849.