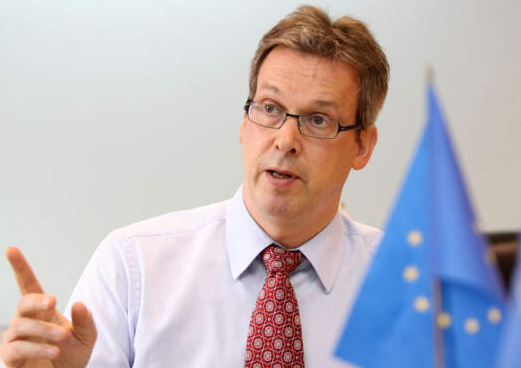 Education will be one of the key areas that the Office of the European Union to Hong Kong and Macau is looking to push to further develop traditionally “strong and warm” co-operative ties between the bloc and Macau, particularly as an increasing number of universities in continental Europe are also offering courses in English.

Vincent Piket, head of the office, made the comments in an interview with The Macau Post Daily on Friday during his visit to the city where he gave a seminar on “The EU’s outlook for 2013” at University of Macau.

“We’ll be promoting Europe more strongly as a destination for Macau students,” Piket, who is the new head of the office, said, acknowledging that so far Macau students preferred to continue their tertiary education in the United Kingdom and Ireland, the two English-speaking countries of the 27-nation union whose 503 million inhabitants speak 23 official and 150 minority and regional languages.

Piket said that besides promoting the European Union’s “classic” Anglophone universities, the office would also at its upcoming European higher education fair in Hong Kong be raising the profiles of universities from continental Europe that are offering courses in English.

“Continental universities have over the past two decades developed more and more courses that are conducted in English, both at undergraduate and graduate level, and those are perfectly accessible for Macau students,” Picket said.

A variety of universities from Europe will be featured in the three-day education fair from March 8 in Hong Kong.

While the dates and venue for this year’s fair have already been fixed, Piket vowed to discuss with representatives from Macau’s Education and Youth Affairs Bureau (DSEJ) and local universities the possibility of the bringing the education fair also to Macau in the future.

Besides education, trade, intellectual property rights protection, customs matters, research and technology, environmental protection and training of interpreters were areas that the EU agreed to work on with Macau during the annual meeting of the EU-Macau co-operation joint committee, co-chaired by Secretary for Administration and Justice Florinda Chan Lai Man, in Brussels last month. Piket, who also attended the meeting, said that it had involved “concrete discussions” on a wide range of topics.

Piket described co-operation in the training of interpreters as “another good example” of the close Macau-EU relationship, pointing out that the multilingual EU had ample experience in tackling translation and interpretation challenges.

Piket also said that he was in talks with the local government on promoting the bilateral co-operation agreement, which celebrates its 20th anniversary this year. He pointed out that Hong Kong does not have a similar agreement with the EU.

In addition, the EU has also agreed to assist the local government in drafting laws including on matters such as migration, customs and human trafficking, which Piket said was a global bross-border phenomenon and which the EU had “a certain know-how” in dealing with the issue.

Piket admitted that intellectual property rights continue to be a concern in mainland China and Macau. However, he was quick to praise the local government’s “sincere efforts” in tackling the matter. “We seen an improvement,” Piket said, who underlined the “commitment from the Macau side” to tackle the issue.

“It’s not yet a perfect situation,” he said, “It’s a continuous battle because much of this has to do with organised crime, border-crossing organised crime.”

Piket said that Macau-EU relations were “warm and strong,” and he described Macau as a “very open, welcoming society” that had a “sense of its special features” and that knew how to use its “special status economically, socially, culturally.”

The career EU diplomat, who has been in his posting to Hong Kong and Macau for four months, also praised his office’s ongoing co-operation with the University of Macau and European Studies Institute. He acknowledged that he would like to see more “practical business” exchanges between the EU and Macau.

Piket said he noticed “lots of sympathy” for Europe in Macau. He also said that the EU would be very happy to contribute to joint efforts in the Pearl River Delta to fight air pollution, “brining to the table the knowhow “ that the EU has in the matter. He also underlined the union’s experience in “overcoming borders” to push co-operation in a wide range of areas.(macaunews)