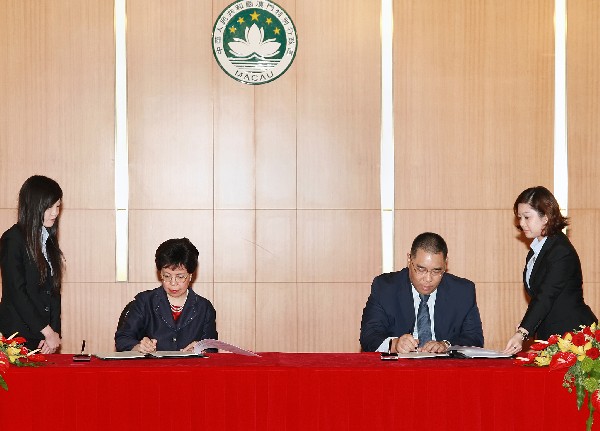 Macau, China, 29 Jul – World Health Organisation (WHO) Director-General Mar­garet Chan Fung Fu-chun said Thursday that Macau enjoyed an “advantageous” geographic loca­tion to develop traditional Chinese medicine (TCM) as it is one of the most important cities where the East-meets-West heritage created a multi-cultural community.

Chan spoke to reporters after signing a co-operation pact with Chief Executive Fernando Chui Sai On at Government House.

Un­der the agreement, the WHO will help organise professional train­ing programmes in the area of tra­ditional medicine in Macau. The deal will cost Macau 24 million patacas.

“Traditional Chinese medicines have always been used primarily by Chinese people, but more and more we’re beginning to see that people in Switzerland, Germany, the US and other parts of the world are using them,” Chan said.

“And my primary objective is to make sure that the products that are being used and the people who are providing the healthcare (seer­vices) are safe based on science,” Chan added.

According to Chan, traditional medicine, which besides tradition­al Chinese medicine, also includes traditional Indian medicine (TIM) and those from other countries, are gaining more and more atten­tion from governments around the world, particularly in the past 10 to 20 years.

Chan pointed out that Chui’s initiative to launch the co-op­eration programme showed that Macau was putting TCM on a science-based platform to prove the medicine’s safety, quality and efficacy, which meets WHO ob­jectives.

“It’s a long road ahead, but I’m confident that Macau will make a good example of introducing poli­cies to regulate traditional medi­cine and register TCM to guaran­tee the safety of people, patients and consumers,” Chan said.

In addition, the co-operation pact will allow professional training for local specialists to improve their management skills, scientific research and clinical studies in TCM.

According to The Macau Post Daily the scheme will start on September 2 and end on December 31,2015.

Macau is in the process of setting up a TCM Industrial Park in Hengqin island. ( MacauNews/ Politics)