Founder and former president of MAPEAL has led an eventful life — at one point even working as a translator for Mao Zedong! Here, he shares his many experiences and reflects back on them. 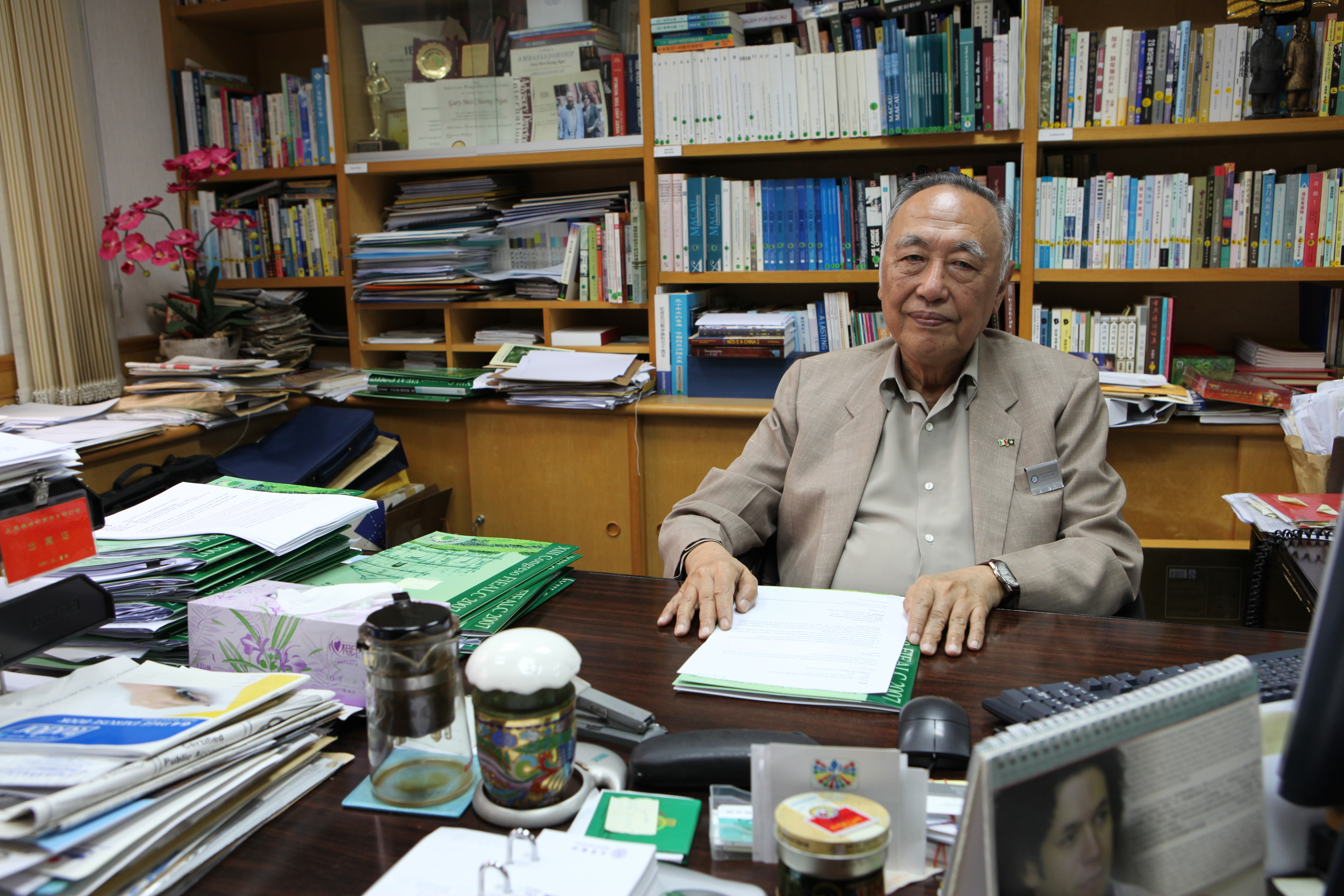 Gary Ngai Mei-Cheong describes Macao as having a unique identity to those of its neighbours — “Hong Kong, Guangzhou, Shanghai and other Chinese cities” — a point where East meets West, with a bridge to Latin-speaking countries as well. “It is a city not only of gambling but of culture.”

Founder and former president of the Executive Board for the Macao Association for the Promotion of Exchange between Asia-Pacific and Latin America (MAPEAL) since it began in April 2005, polyglot Ngai has since passed on the baton to Sonia Chan Prado due to his age, now only remaining a member of the executive board since 2019. “She has been working with me for two decades,” he says, “and quite able to take the lead.”

Born in 1932 in Semarang, the capital of Indonesia’s Central Java province, to a sixth generation Chinese-Indonesian family that originated from Fujian province in southeast China, Ngai personifies Macao’s Indonesian community – possessing a multi-cultural background from a diverse upbringing.

Son of an accountant in the Dutch colonial government, he was born into a family that had prospered in business, thus affording him a comfortable home to grow up in. With a knack for learning languages, he easily picked up Dutch from his father and schooling, then Mandarin Chinese and Javanese from his mother. He had also gotten the chance to learn English and Japanese in school, as well as Bahasa Indonesian which became the national language after Indonesia gained independence in 1945.

His family was also diverse in religious beliefs. One grandmother was Muslim, another grandfather was Buddhist, while four aunts and uncles were Roman Catholic. “I had many religions in my head. Everyone lived peacefully together,” Ngai says, “It was a preparation for Macao, where different languages and religions are respected.”

When the People’s Republic of China (PRC) was established in 1949, Chinese communities abroad were hit by excitement and feelings of patriotism, with teachers in his Mandarin-based secondary school encouraging students to return to the “motherland”. One of many youths inspired by this, he left for China in 1950, just two years after the PRC was established, despite some of his greater family opposing this decision.

Upon arriving, they were given a hero’s welcome at the port of Tianjin, then transferred to Beijing. While some remained and were assigned to study at China’s leading institutions, he was sent for training at the United Front Department. After a year, he was sent back to Beijing and trained as an interpreter at Renmin (People’s) University, where he attended classes in Russian on Soviet history, economy, philosophy and Marxism and graduated in 1956. He then worked as a top-level interpreter for Mao Zedong, Deng Xiapoing, Peng Zhen, and many other leaders, translating from Chinese to Indonesian, Dutch and English.

Asked how he felt about meeting these important figures of the People’s Republic of China, he merely says that it was normal because there were also many other translators working simultaneously; “We were all so young”. He had also been part of the 8th National Congress of the Communist Party of China in 1956, translating inside a box with earphones on and speaking at the same time. After the sessions, he’d translate the speeches into an Indonesian report. At this time, he also learned French, German, Italian, Swedish, Norwegian, and Danish on his own, and started translating in those languages as well, through the guidance of native language experts and self-study.

In 1961, he married Molly, an Indonesian Chinese from Medan who had also moved to China in 1951, who was a specialist in English studying at St John’s University in Shanghai. Earning just 86 yuan a month from 1959 until 1979, those years were difficult, especially with his wife pregnant; “She had hardly any milk, so I had to buy some.” Despite the anti-rightist campaign in 1957, he was spared. However, during the Cultural Revolution (1966-1976), he and his family had to spend four years living in Heilongjiang in a “cowshed”, suffering through winters with temperatures that fall as low as 36 degrees Celsius. For a time during this period, they also lived in a relatively poor village in Henan.

During the Cultural Revolution, he had many of his books and records confiscated and taken away by the Red Guard. He was also taken to a camp for a week, constantly bombarded the whole time with questions; “So many questions, people become numb.” He also recalls that at one point he had been made wear a white pointed hat and told to walk back and forth in the camp, while guards would kick him. This led to a spinal injury that a doctor later confirmed. “It took a long time to heal.” He was later spared and got to leave the camp.

When Ngai’s mother-in-law escaped to Macao after anti-Chinese riots in Indonesia (1965-1966), his wife and two children joined to take care of her in 1978. After his superior initially refused him leaving, his wife wrote a letter to the minister responsible. He was then given approval to rejoin his family in Macao.

He was already 47 years old when he moved to Macao, needing to start a new life. “It was hard at the beginning. Macao was a small place and I could not find a job.” However, he soon learnt Portuguese and Cantonese, adding on to his already impressive repertoire of languages.

“I do not regret my decision to go to China. It was a decision I took myself. On the positive side, I really understood China from the very top to the very bottom and I made a contribution to the new state. On the negative side, we suffered a lot. I never considered moving back to Indonesia, where I have many relatives. Anti-Chinese sentiment remains and what could I do there?”

His mother-in-law joined the Association of Returned Overseas Chinese of Macao; “The overseas Chinese coming from Indonesia in Macao was the second largest community next to those coming from Birma, later called Myanmar.” Ngai had also been appointed one of their advisors in the early 1990s.

Ngai’s first job in Macao was at public broadcaster TDM as a translator in the newsroom. Eventually, he worked his way up to be the deputy director of programmes for their Chinese radio channel. He also worked at the Governor’s Palace, becoming a technical adviser to Macao’s last governor, Vasco Joaquim Rocha Vieira, in the period running up to the 1999 handover of administration. As part of that role, he compiled the Chinese news every day, giving Vieira and the Portuguese government local perspectives.

“Nobody else [understood] Chinese and I was the only one doing that,” Ngai says, “I was the key man at that to provide the top leaders of government here of what’s happening during the transition from the Chinese [perspective]. The gap had to be bridged to have a good agreement for the transition.”

As Ngai explains, understanding this local perspective allowed transition in Macao to be much smoother and not copy the mechanisms the British had in place for Hong Kong’s handover. This was because Macao functioned under different conditions that would flounder under a system copied from Hong Kong due to a different culture that had grown under Portuguese rule. Also, “Macao had casinos, but Hong Kong did not”.

He then successively became the associate director of the Cultural Affairs Bureau under the Portuguese, founder of the Macau Sino-Lain Foundation — with support from Stanley Ho and Xinhua News, as well as approval from the Governor — and then the former Vice-President of the now-defunct Associação de Ciências Sociais de Macau. He has been the former president of three other associations – the Macao Sun Yat-Sen Association, the Instituto de Estudos Culturais de Macau and the Rotary Club of Macau. He had been in the Instituto de Estudos Culturais de Macau with Ho Iat Seng’s father, the late industrialist Ho Tin, who even to this day, he greatly respects for his forward-thinking that Macao’s cultural heritage be preserved and developed.

Associação de Ciências Sociais de Macau’s importance lay in having supported their efforts at the Hong Kong-Macao Centre in Guangzhou, of which Ngai was an adviser to. They arranged yearly conferences that proposed lots of new ideas for businesses and culture in Macao, Hong Kong, and the other Pearl River Delta cities.

Macao Sun Yat-Sen Association was important because after the Kuomintang established Taiwan, ties with China were “scarce”. This association, under Ngai, reconnected Taiwan to Mainland China and vice versa, so that dialogue could continue among the civilians and academics. He also shared that Taiwan’s first flight to China was through Macao. “They’d land and change the flight number, then fly onward to China.”

Nowadays, he lives a quieter life. Ever since retiring from his position at MAPEAL, Ngai spends half the year in Australia with one son, while the other half in Macao with his other son. When he’s not attending MAPEAL events — promoting Macao’s ties with Latin America and the Latin-speaking world — he’s using much of his time recollecting the past and is planning on writing a book based on his reflections. As he says, there were both good and bad aspects of China’s past, and it should be shared with the new generation so they learn to critically think about it. “I was under Mao, and we did a lot of wrong things under Mao in China,” Ngai says, “Many people died…starved, with nothing to eat.”

To prepare, he’s now recollecting his memories of the past and the events that have occurred; “I have to read a lot of books before I start.” But the main takeaway he wants readers to get from his planned book is for the young people of China to understand there were mistakes made. “In what you call a modern China,” he says, “don’t do the bad things that had happened and repeat the same mistakes in the future. As a Chinese, they must know what was wrong and not make the same mistakes in the future.”

“You have to recollect what was wrong at that time in history,” he continues, “Nobody dares write about, so I feel like I should write what was wrong.” He points out that since he’s now outside of mainland China, he can write without fear. Asked when his book might come out, he laughs and says that he will try to finish it soon. “I am almost 90 now,” Ngai further says, “I’ll try to finish the book when I’m 90, before I see God and bye-bye to everyone.”