The Changing Face of Farming: It’s Pure Production runs the first and only commercial aquaponics farm in Macao Link copied 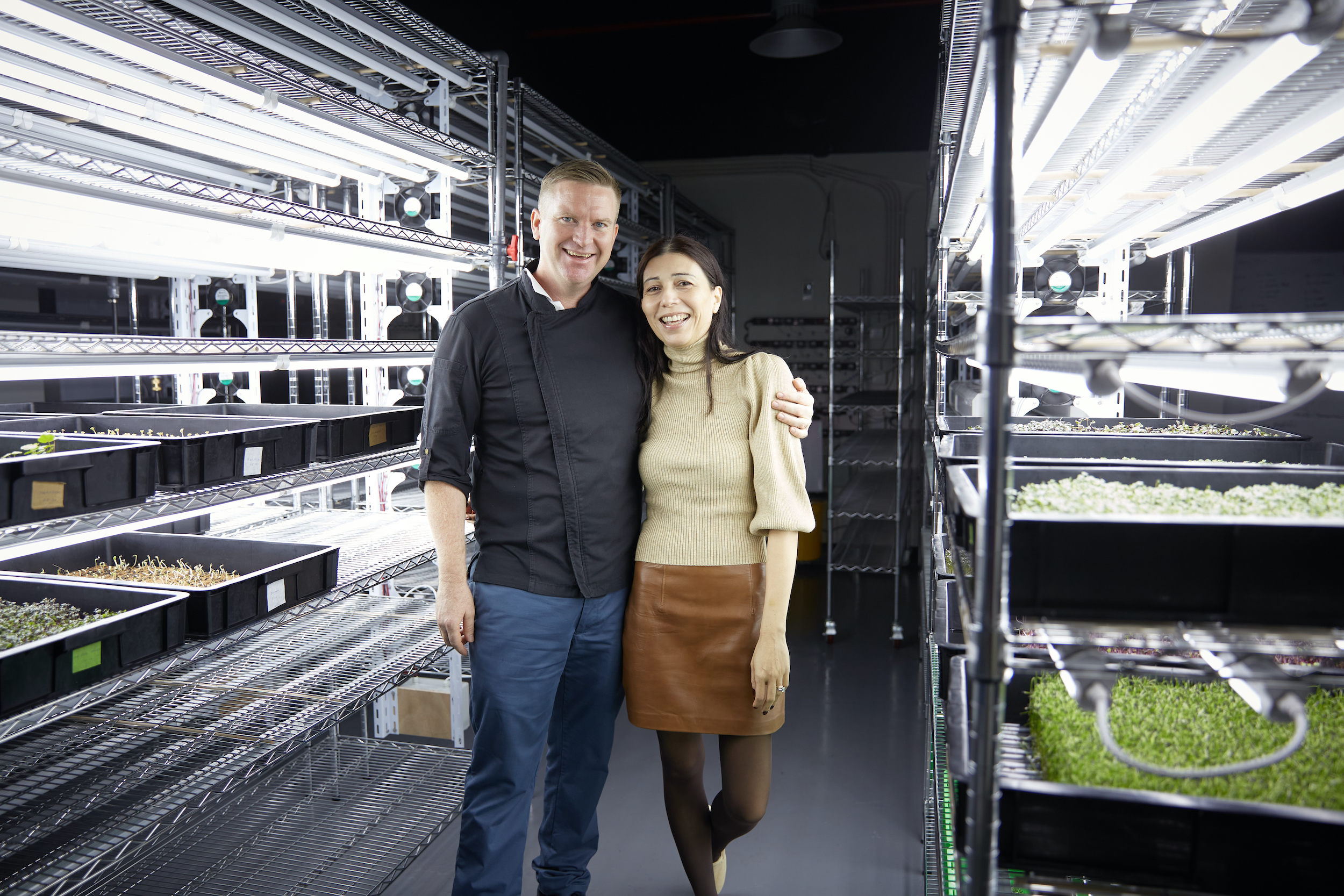 When we arrive at the indoor greenhouse, husband-and-wife team Sam and Sandra Power ask us to wash our hands, then guide us into a holding room that’s walled off from the manmade ecosystem beyond. Before stepping through the second door, we spray our shoes, sanitise our hands, and secure our face masks as biosecurity measures.

“We are the first fully-operational licenced aquaponics urban farm in Macao,” says Sam Power, the CEO, as he opens a sliding door to reveal a 2,000-square-foot greenhouse. “The [government] licence for something like this didn’t even exist, so the guidelines are being built around us.”

Inside the greenhouse, there are rows and rows of vertical beds of microgreens in all shapes and colours, from pea tendrils to green basil, red acre cabbage, red mustard leaf, red vein sorrel, amaranth (which yield edible starchy seeds), daikon radishes and purple kohlrabi (akin to tiny turnips).

It would be fair to describe It’s Pure as “ground zero” for the urban farming movement in Macao. In this indoor ecosystem, which opened at the end of 2019, the Powers work side by side on a futuristic growing operation that’s smarter, more environmentally sustainable and cleaner than the factory farms that currently dominate agriculture.

According to aquaponics research at RMIT University in Melbourne, Australia, the past 50 years have seen a massive expansion of agriculture, with food production more than doubling in order to meet demand. But it has left us with 60 per cent of all ecosystem services degraded, accelerated species extinction, and huge losses in genetic diversity.

“We really have an opportunity to do something great, not only for Macao, but for all of us on a global scale,” says Sandra.

Sam agrees: “Our end game is to produce baby vegetables grown in the aquaponics system, which has not been done anywhere else in the world. We could supply Macao with all the herbs and vegetables the city needs.”

The inspiration for It’s Pure took shape during Sam’s previous career as a chef. The Australian native worked in some of the biggest kitchens in Macao and, when ordering microgreens from international suppliers, was continually disappointed with the quality of the produce.

“I’d receive a box of greens and I would throw 30 to 40 per cent of them straight in the bin,” he says. “By the time they get from the farm to your kitchen, they are four or five days old already. They might have landed in Hong Kong and sat on the tarmac in the sun for a day before being moved – you just don’t know.”

Seeing an opportunity, the couple researched urban farms and began sowing the seeds for their vision. “Originally we were going to do hydroponics,” says Sam. “But the chemicals needed for the water can also be used to make explosives, so the Macao government obviously said no. We’d already started building, so I needed to figure out what to do quickly. That’s when I discovered aquaponics as an alternative.”

Urban farmers have long used hydroponics – growing plants in a liquid nutrient solution without soil – to produce crops in unconventional settings such as garages, basements and warehouses. Aquaponics, which is a hybrid between this soil-free method and aquaculture (or fish farming), is also not a new concept.

Though the origins are up for debate, many scientists believe the Aztecs first introduced the method in 1000 AD, growing vegetables on reed rafts in Lake Tenochtitlan. This idea has evolved over time, re-emerging in the US as a modern, self-sustaining agricultural technique in the 1970s.

In a modern aquaponics system, naturally occurring bacteria breaks down fish waste (ammonia) into nitrates. Pumps then feed the plants this nitrate-rich water, which helps the plants grow. As the plants consume the nitrate, they simultaneously clean the water. And whatever’s left can be filtered back into the system to “close the loop”. Meaning, the system produces zero wastewater, making aquaponics one of the most sustainable ways to grow food.

And since aquaponics is a climate-controlled system, growers can produce fresh, chemical and pesticide-free microgreens all year round.

“It’s all about making the conditions perfect – exactly what microgreens need to grow,” says Sam. “So we have two air conditioners that sit at 21 degrees Celsius and humidifiers everywhere to ensure we’re maintaining 50-60 per cent humidity.”

“I’m actually glad we couldn’t get the chemicals for hydroponics. I’m much happier doing it this way.”

Building the aquaponics farm presented a sharp learning curve for both Sam and Sandra. “I grew up [in Mildura, a city in rural Australia] with a veggie garden and learned how to grow everything,” he says. “But that was on land, with soil and a river. This is the same concept but a different practice.”

Sandra was unfamiliar with aquaponics, too. What’s more, growing up in Macao, having any type of garden was a foreign concept to her. “I had no idea that this sort of thing existed,” she says. “To see what is possible has been a real eye-opener.”

The couple spent many late nights watching YouTube videos, which taught them everything they needed to know. And in just one month, they ordered, built, and connected the whole system.

At It’s Pure, the aquaponics system has been set up around a large fish tank where two enormous, 40- to 50-centimetre-long koi fish feed the whole farm.

“Originally, I thought I would need about 30 fish,” says Sam. “But even when we’re running at 100 per cent, these two will feed the whole farm.”

When it comes to planting the seeds, the couple use mats made of coconut husks instead of soil, which is not allowed in commercial kitchens. Essentially, they plant the seeds in the coconut mat, leave them to germinate for four to seven days, then move them to a ‘vertical farm’. At this stage, Sam or Sandra will hand-water and carefully monitor each plant.

While the entrepreneurs have ironed out the kinks in their process by now, Sam says they ran into all kinds of problems at first. “We’ve had floods, runaway fish, and dying greens almost daily,” he says. “A lot of it comes down to the temperature and the humidity. It’s a very fine line.”

‘A step in the right direction’

In addition to setting up the system and navigating curveballs, the entrepreneurs encountered another major challenge. Sam and Sandra started It’s Pure at the end of 2019, officially opening their doors just 10 days before Macao shut down under Covid-19 restrictions.

“We had to make the hard decision to shut down or keep going, and we chose to keep going,” says Sandra.

They quickly updated their business strategy, which was originally aimed at hotels and casinos. “We changed tack and targeted local restaurants and local consumers as well. It’s been a tough year,” says Sam. “We are only running at 10 per cent capacity, but things are slowly turning around.”

While it has been a long road to get most of the bigger operators on board, some smaller, local restaurants jumped at the chance to use locally grown produce. Hector Costa, the owner and chef at Barcelona Macau restaurant, has been one of their biggest supporters, having ordered a box of microgreens every week since the aquaponics farm opened.

Despite starting up in a particularly tough year, Sam and Sandra are both optimistic about the company’s future. “We’ve finally got contracts in place with most of the big operators, and now the turnover is picking up,” says Sam.

The couple already has their sights set on expanding, diversifying and bringing their eco-friendly greens to more people in Macao. “By the middle of 2021 we are going to have fully grown herbs like basil, thyme and cilantro,” says Sam. “And by the end of the year, we want to do lettuce, with mushrooms to follow in 2022.”

Of course, producing fresh herbs and vegetables is just half of the equation. Looking at the bigger picture, Sam and Sandra hope to raise awareness about the most sustainable food production systems, freshness and quality. “We need to change the way Macao consumes,” says Sandra. “We rely too much on imports, which generates a huge amount of waste.”

It’s also about the next generation, they agree. “We have three sons,” adds Sam. “We want to leave a better world for them, and this is a step in the right direction.”