An early love for desserts led Kathine Kuok down a culinary path that would bring her all the way to Japan, then back again. Learn more about this talented young pastry chef from MGM Macau. 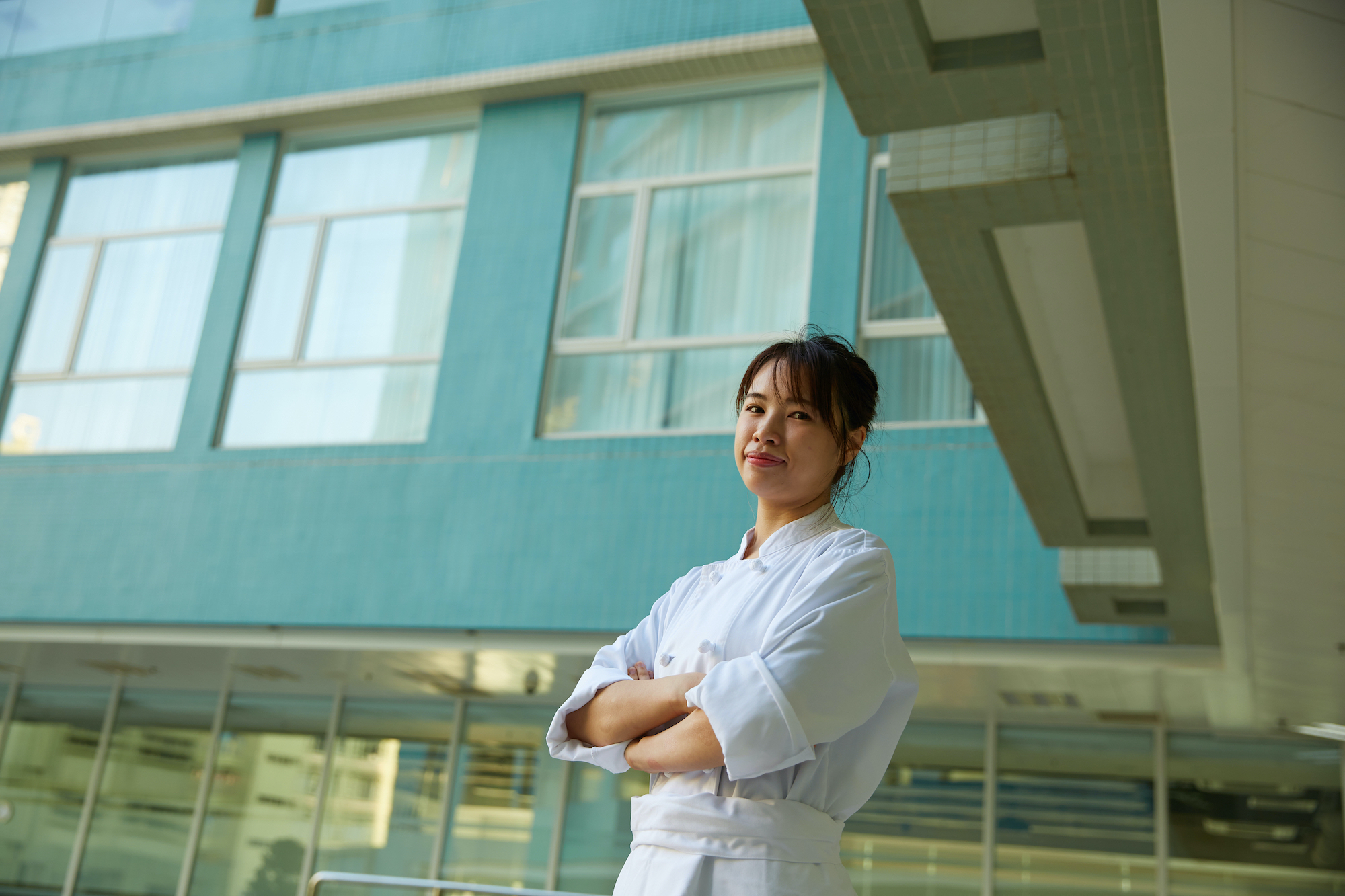 Kathine Kuok, the next subject of our “Know Your Chef” series, started to develop an interest in creating beautiful desserts when she was still in her teens. By her twenties, she found herself drawn to the art of Japanese-style pastries. Characterised by a lighter texture, with less sugar and butter than its western counterpart, Japanese pastries eventually brought Kuok all the way to Japan to develop her craft in dessert-making. Learn more about her discovery of desserts, and her long standing relationship with MGM Macau, where she now works as one of their pastry chefs.

The early days: Kuok’s father is a traditional Chinese pastry chef, who co-owns local bakery, Pastelaria São Paulo (大三巴餅家). Growing up, Kuok would occasionally help entertain customers at the shop, but says she never had much interest in the back of house. “My dad tried to teach me how to make traditional Chinese pastries, mostly almond cookies, because he thought it was important to acquire a specialty in order to make a living,” she says. “But I was being rebellious back then and did not end up taking an interest in it.”

It was only when she took up a part-time job at a local café at 16 years old that her passion for desserts came to life. “They let me make simple things like puddings. I felt very satisfied when I received positive feedback from the customers,” says Kuok. “It’s only now that I realise how my father has influenced me throughout my journey.”

The turning point: Kuok entered a hotel management course at Macau University of Science and Technology (MUST) in 2009. But she simultaneously enrolled in the pastry and bakery diploma course at the Macao Institute for Tourism Studies (IFTM), allowing her to hone her skills in the kitchen. During the same period, she also worked part-time at the MGM Macau Pastry Bar, an opportunity which she says helped to improve her organisation and communication, as well as team management – all necessary skills to work in a professional kitchen.

Upon graduating from university, Kuok set her sights on another diploma – this time in Japan. She enrolled at Le Cordon Bleu Tokyo for their pastry diploma programme – a two-year commitment that would immerse the fledgling chef in the art of Japanese patisserie.

Gaining momentum: Following her departure to Japan, Kuok threw herself into her work – which by most accounts, sounds like an enviable task. “I tried many different styles of Japanese cakes, and found that their style is very distinct and unique,” says Kuok. “For example, I really love Japanese strawberry shortcake, which has a ‘cuter’ presentation and a softer texture than the western version. It looks so simple, but it requires solid basic knowledge.”

When Kuok finally returned to Macao in 2015, she worked at Galaxy Hotel as a commis (a junior chef) for two years, before going full circle and rejoining the pastry team at the MGM Macau in 2017.

Most meaningful culinary experience: Kuok says that her time in Japan left an indelible impression on her professional craft and personal standards. She describes Japanese culture as hard-working and hyper-focused, leading to incredible achievements in the kitchen.

“[Japanese chefs] could be making nothing more than a simple cake, but whatever it is they’re doing, it’s executed perfectly.”

All-time favourite dessert: It comes as no surprise that Kuok has a sweet tooth that she loves to indulge. This pastry-loving chef says her comfort foods include strawberry shortcake or a chestnut and cream-laden Mont Blanc tart. However, it’s the bite-sized French pastry canelé that she seeks out on her hardest days. “When I’m tired at the end of the day, or maybe a little bit sad, I will eat that and feel happy again,” she says.

Little-known fact: In 2018, while still a pastry chef at MGM Macau, Kuok entered the Anchor Food Professional Pastry Challenge, an international baking competition. She made the shortlist of entries from Macao.

Parting advice: Kuok says for anyone planning to become a chef, she warns against underestimating just how much commitment is involved. “There’s always pressure and you need to be hardworking,” she says, adding that taking the initiative to improve one’s craft will always pay off in the long run.

“The world is constantly changing, and that applies to the culinary world as well,” Kuok says. “Keep pushing your passion and creativity.”