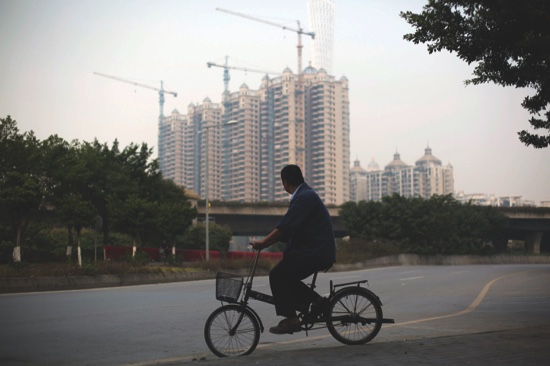 A man on a bicycle rides past cranes operating at a residential construction development in the Haizhu district of Guangzhou, Guangdong Province, China, on Saturday, Nov. 23, 2013. New home prices in China’s four major cities rose the most since January 2011, raising concerns of a bubble as home buyers were emboldened by a lack of new nationwide property curbs. Photographer: Brent Lewin/Bloomberg
23 February 20168 March 2016 BY STAFF REPORTER
BY STAFF REPORTER23 February 20168 March 2016

China’s State Council urged authorities to focus on improving infrastructure in the Pearl River Delta by integrating road, port, rail and air links with that of South China’s Special Administrative Regions. These improvements will establish Guangzhou as a key hub in Beijing’s ‘One Belt, One Road’ national initiative.

Guangzhou should also use its pilot free-trade zone in Nansha to establish deeper cooperative ties with Macau and Hong Kong, the State Council added.

According to the South China Morning Post, Beijing had not supported Guangzhou’s previous attempts to develop its port and aviation capabilities, as the Central Government was concerned about the potential impact on Hong Kong.

Professor Priscilla Lau, a Hong Kong deputy to the National People’s Congress, told the newspaper that the plans are a reminder to Hong Kong that the SAR would become an “isolated island” if it avoided cooperation with other cities in the Pearl River Delta.

The Central Government also approved Guangzhou’s population target of 18 million by 2020. Guangzhou recorded around 13 million residents in 2014, and has proposed dramatic urbanization and migration to meet its new target.

“If going only [by] natural growth, Guangzhou would not have that many residents by 2020,” Yuan Qifeng, a city planning professor at Sun Yat-Sen University, told the Guangzhou Daily.