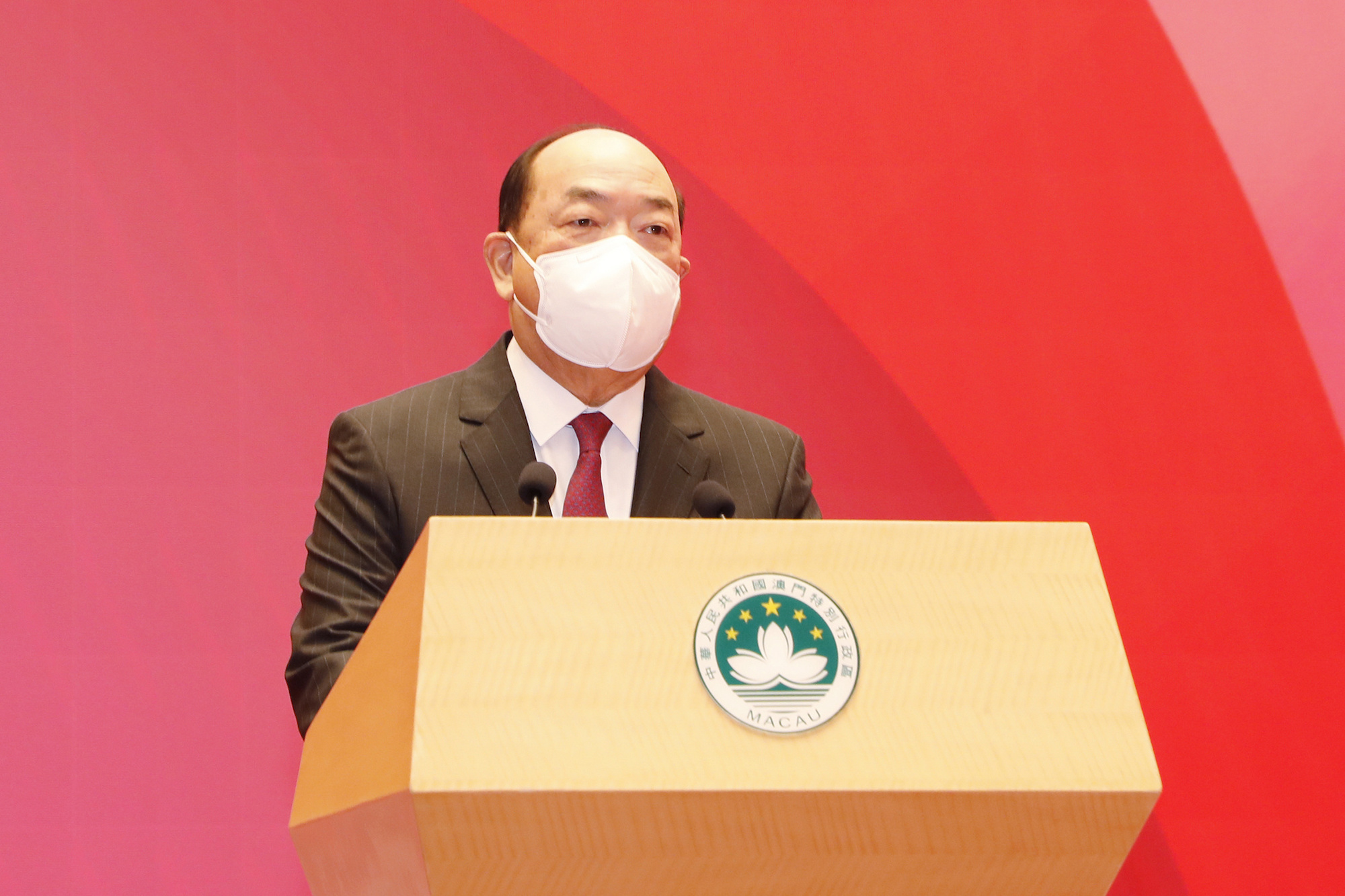 Chief Executive Ho Iat Seng yesterday called on Macao to look to the future and the prospect of the city’s post-pandemic development.

The chief executive was speaking during a reception to celebrate the 23rd anniversary of the establishment of the Macao Special Administrative Region (MSAR) at the China-Portuguese-speaking Countries Commercial and Trade Service Platform Complex (Forum Macao).

Ho acknowledged that Macao’s economy, the livelihood of its people and local employment had been severely impacted over the past three years amid recurring Covid-19 outbreaks. Based on the central government’s support, Macao has always adhered to the national Covid-19 prevention policy, prioritising people’s safety and health, and uniting all sectors of civil society, Ho said. The concerted efforts ensured that Macao has been able to safely overcome the severest challenges, including the June Covid-19 outbreak during last summer, Ho pointed out.

Looking ahead to next year, Ho said the government will respond to the latest Covid-19 related developments, in order to optimise prevention measures as appropriate, and implement the “20 adjusted measures” and the “10 new measures” announced by the State Council. Ho emphasised that the focus of Covid-19 control has changed from infection prevention and control to medical treatment, thereby safeguarding people’s health and preventing severe cases.

Macao will closely monitor Covid-19 developments and the degree of severity of confirmed cases, and allocate medical resources as needed, Ho pledged. He said the aim was to reduce the incidence of severe cases and to lower risk of fatalities, in order to safeguard people’s lives and health, and to minimise the impact of the pandemic on Macao’s socio-economic development.

With the gradual relaxation of restrictions on people’s movements, the completion of the tender for Macao’s new gaming concessions and the signing of the agreements with the six operators, and the implementation of the 1+4 strategy for advancing appropriate economic diversification, Macao will definitely overcome its predicament, and embrace a new horizon in terms of post-pandemic development, Ho said.

Ho laid out the 1+4 strategy in his 2023 Policy Address last month, by which the government will adopt the 1+4 appropriate diversification development strategy to enrich Macao’s function as One Centre for integrated tourism and leisure, while facilitating the development of four nascent industries: Big Health; modern financial services; high tech; and the sectors of conferences and exhibitions, commerce and trade, and culture and sport.

Ho said the government, while maximising its efforts in epidemic prevention and control, would always uphold the One Country, Two Systems principle while upgrading the quality of public administration and fine-tuning economic development.

Over the past three years, the government has always adhered to the principle of serving the public, giving priority to improving people’s livelihoods, and striving to resolve problems related to employment, housing, healthcare, and the care of the elderly, Ho said.

The government’s expenditure on maintaining regular welfare for local residents amounted to MOP 68.3 billion, while its expenditure on providing financial assistance in response to the pandemic was about MOP 32.3 billion – resulting in a total expenditure of MOP 100.6 billion, Ho pointed out.

Ho also underlined his government’s ongoing effort to adhere to the rule of law, effectively safeguard national security, and continuously improve the overall quality and standard of governance in Macao.

The government is determined to integrate Macao more proactively into the overall national development plan, Ho said. The 2nd Five-Year Plan for Economic and Social Development of the MSAR had been published, in order to align comprehensively with the national development strategy, the chief executive noted.

The government has participated in the development of the Guangdong-Hong Kong-Macao Greater Bay Area and the Belt and Road Initiative, Ho said. He also said that there have been significant results in the construction of the Guangdong-Macao In-depth Cooperation Zone in Hengqin; and steady progress in the establishment of strategies relating to the aim of consolidating Macao’s status as One Centre, One Platform, and One Base.

In the coming year, the government will seize the opportunities arising from national development; make good use of the policies and measures introduced by the central government in support of Macao’s development; focus on promoting economic recovery; actively improve people’s livelihoods; tackle the deep-rooted conflicts and problems in economic and social development; expedite appropriate economic diversification and the development of the Guangdong-Macao In-depth Cooperation Zone in Hengqin; and better integrate the MSAR into the overall national development plan, Ho said.

At the reception, Ho also announced that the Macao Student Science Satellite I has been released successfully from the China Space Station into orbit. The project illustrated the nation’s support for including Macao and the Greater Bay Area in the country’s science research effort, the chief executive said. In addition, Ho underlined the MSAR has received a congratulatory message from the nation’s three astronauts currently in orbit – Fei Junlong, Deng Qingming and Zhang Lu – on the occasion of the 23rd anniversary of the MSAR.

In the morning, Ho and around 250 guests attended a flag-raising ceremony held at Golden Lotus Square, to mark the anniversary, The Macau Post Daily reported.