Ho says Macao will strive to see that non-gaming industries account for 60% of GDP, while building sustainable industrial structure that fits city’s reality. 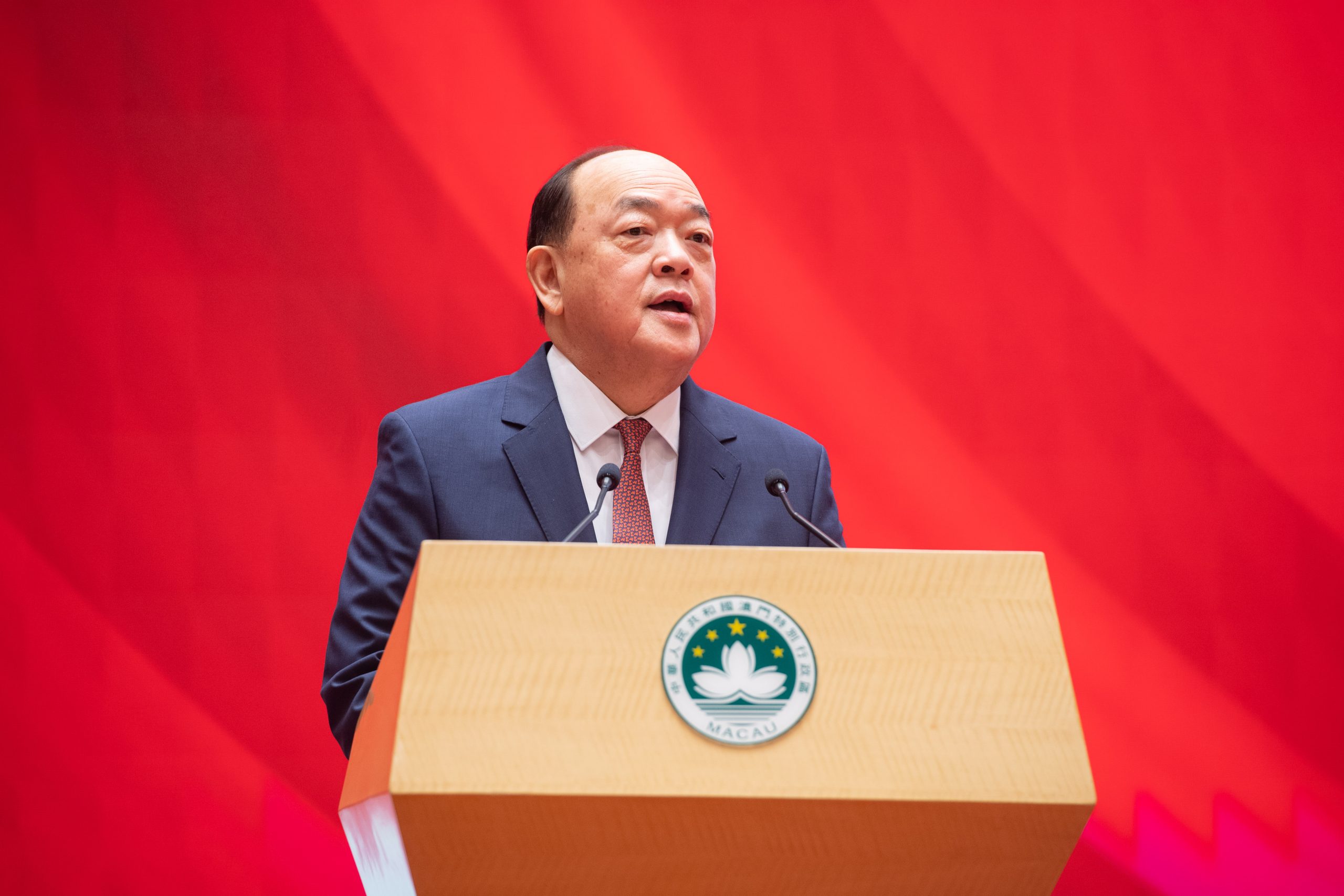 With sound conditions facilitated by the central authorities, the MSAR government will better leverage its advantages of staunch support from mainland China and connections with the world, and enhance the coupling effects of the domestic and international markets and resources to achieve new development, Ho said.

Since mainland China’s central authorities issued a general plan for building the Guangdong-Macao Intensive Cooperation Zone in Hengqin in September 2021, the development of the zone has injected new energy into Macao’s integration into overall national development and the enriching of the “One Country, Two Systems” practice.

“The intensive cooperation zone is not an ordinary development zone, but a pioneering move that requires joint administration by Macao and mainland China over an area of 106 square kilometres. There’s no precedent to follow,” Ho said.

In the MSAR government’s 2022 and 2023 policy addresses, the intensive cooperation zone was listed as a priority.

Ho said the cooperation zone provided Macao with support on land and employment, expanding the space for Macao to appropriately diversify its economy.

During the past year, preferential tax policies were put in place for businesses and Macao residents working in Hengqin. Investors can now complete business registrations in Hengqin or Macao without crossing the border. Quota limits have been lifted on Macao-registered private passenger vehicles to enter Hengqin.

With these solid foundations laid, the development of the cooperation zone will focus on linkages of mechanisms and rules as well as supporting facilities for people’s livelihood in the future, Ho said.

This year is crucial for the building of the cooperation zone and the achievement of its first-phase goals, he noted, stressing the need to use creative thinking to break the bottlenecks.

Ho said promoting appropriate economic diversification and striving to build an appropriately diversified industrial structure is the primary task for the MSAR government and different walks of civil society.

“Macao has no primary industry while the proportion of the secondary industry is very small,” Ho said, pointing out that Macao’s heavy reliance on the tertiary industry highlighted the problem of the imbalanced industrial structure that aggravated economic woes during the Covid-19 pandemic.

“Learning from the painful experiences, Macao must achieve the goal of industrial diversification,” he added.

In the policy address for the fiscal year of 2023, a strategy was put forward to achieve economic diversification by building Macao into a world tourism and leisure centre and continuously advance the development of major industries of big health, modern finance, high tech, conventions and exhibitions, as well as culture and sports.

In June 2022, the revision to Macao’s gaming laws was approved and took effect. Near the end of the year, a new round of gaming concession tendering was completed.

“We will make efforts to see that the non-gaming industries account for around 60 per cent of Macao’s GDP [gross domestic product] and build a sustainable industrial structure that fits Macao’s reality,” he said.

Noting that the process of industrial diversification takes time and faces difficulties, Ho said this barrier must be crossed to avoid having to face the same problem again in the future.

Safeguarding national security and maintaining social stability was also listed as one of the priorities for governance in the MSAR government’s policy address for 2023.

Ho said the MSAR will always work to ensure that the political power and the power of governance are held firmly in the hands of patriots so as to consolidate the socio-political foundation for the steady and sustained development of One Country, Two Systems.

Since 2009, Macao has completed legislation on safeguarding national security as stipulated in the Basic Law of the MSAR, established the Committee for Safeguarding National Security of the MSAR chaired by the chief executive, amended supporting laws, stepped up the building of the enforcement team, promoted education on the subject, and improved the election system for the Legislative Assembly.

In 2022, the MSAR government steadily progressed with the amendment to the law on safeguarding national security in Macao.

“Safeguarding national security is the constitutional responsibility of the MSAR,” Ho said.

The MSAR government stated in its second five-year plan that the election system will be improved to ensure that the power of governance is held in the hands of patriots.

Macao was hit hard by Covid-19 in 2022, which led to the suspension of major business activities, posing unprecedented downward pressure on the macro economy.

Looking back, Ho said the MSAR had formulated epidemic control policies in accordance with the central government’s general principle during the past three years, while working to meet people’s livelihood requirements, guarantee social stability, and maintain personnel, business and trade exchanges with mainland China.

On 8 January, the first day since Macao and mainland China stopped requiring nucleic acid test results for Covid-19 when crossing the border, nearly 40,000 visitors entered Macao, about 1.5 times higher than the daily average number of inbound visitors in 2022.

“You can see more people on the streets. Macao’s economic vitality is coming back,” Ho said, stressing that the MSAR will make sound arrangements to welcome visitors, including implementation of policies allowing mainland Chinese residents to apply online for visas to Macao and for group tours.

As stated in his policy address for 2023, the MSAR faces two important and urgent tasks to speed up economic recovery and promote appropriate diversification.

“Economic recovery is a short-term goal. The long-term goal has to be promoting appropriate diversification, which is the only way for Macao to solve its underlying conflicts and problems in socio-economic development,” he added.

Noting that this year marks the 30th anniversary of the promulgation of the Basic Law of the MSAR, Ho said Macao has ushered in a good start of the year, with multiple favourable factors emerging, The Macau Post Daily reported.

The current priority for the MSAR government is to focus on economic work and improve people’s livelihoods, hoping to achieve economic recovery and new development by actively integrating into the country’s economic circulation and realising Macao’s appropriate economic diversification, he said.

“Macao faces a very good development opportunity. I’m confident that the MSAR government together with Macao residents can seize the opportunity,” Ho added.