From rooftop terraces to deep in the woods, local painter Lai Sio Kit creates otherworldly escapes with just a few strokes of his paintbrush. Though the pandemic has turned the world upside down for most people, Macao artist Lai Sio Kit says life has continued as usual for him. “For people like us, with or without Covid-19, we spend most of our time at home or in the studio painting,” says the 38-year-old from his workspace, located down a little alley in one of the city’s older neighbourhoods. “The pandemic has actually allowed me to have more time to focus on my work, with fewer chores and errands that I need to attend to.”

In a time where travelling is impossible, the importance of art as a means to escape is more pronounced than ever. Lai’s oil paintings have the ability to transport an observer somewhere else entirely, with an acclaimed body of work that depicts Macao’s myriad rooftops, alleyways and urban edifices. Using soft colours and gentle brushwork, his pieces evoke a certain kind of peacefulness and serenity through distant observation of chaotic city life.

His unique approach to rendering his hometown in this style has won Lai a degree of praise abroad, with 19 solo exhibitions in China and Portugal, as well as in Macao. However, his latest exhibitions, “Brightness Through Shadow” in Macao last summer and “Splashing Brilliance” in Beijing in January, have taken a different direction entirely – something the painter feels was long overdue for him.

“I have painted my ‘City’ series for about a decade now, and I think it’s time to explore other subjects,” says Lai. Trading urban life for the great outdoors, the artist’s latest artworks depict dramatic forest landscapes. His signature muted colour palettes have been swapped for stark contrasts of black and white, with bolder and more fluid brushstrokes that are more expressionist than realist.

“I’ve tried to strip down in this collection, using only black and white,” says Lai about the latest showcase in Beijing, which took place in 798 Art Zone, one of the capital’s most thriving artistic communities. He adds that he tries to paint entirely through memory, without the use of visual references like photographs. 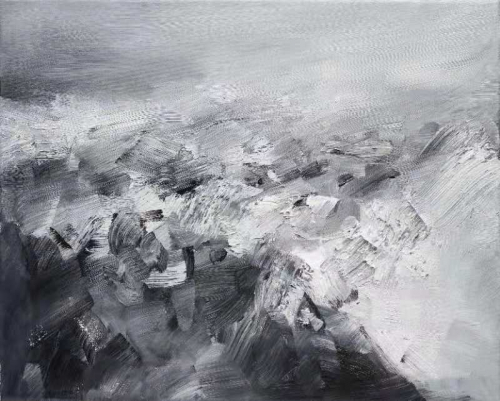 In response to the marked difference between his present and past works, Lai believes that the same personal motivation runs central to both. “One of the reasons I started the ‘City’ series was to find breathing room in an urban space, like rooftop terraces, to simply chill and relax,” Lai says. “The scenes I paint now have the same desire — they also share a tranquil vibe.”

While today he enjoys the freedom to experiment and thrive in his artform, Lai says that wasn’t always the case for him. “Unlike the early stages of my career, when I had to overcome numerous creative bottlenecks in terms of new techniques and skills, I feel as though I’ve been in the groove in recent years, and more able to focus on my motivation and what I want to convey to the world.”

When asked whether he thinks he’s in his prime artistically, Lai remains modest. “I don’t think I’m particularly talented, as all my techniques have only been acquired through years of learning and experience,” he says.

Lai attended the Central Academy of Fine Arts (CAFA) in Beijing – one of mainland China’s most prestigious art schools – eventually graduating with a bachelor’s and master’s degree in oil painting. Determined at a young age to become an artist, Lai’s ambitions were derailed briefly when he was rejected on his first application to CAFA. The experience only helped to reaffirm his dream, however, reapplying after a year spent studying clothing design at the Beijing Institute of Clothing Technology.

Lai says the experience helped to clear his mind and heart, giving him the drive he needed to succeed on his second attempt. “I got to know more about myself that year — and I learned I really love painting,” he says. “When I was still a little kid, I already had a dream of becoming a painter; that experience enabled me to face it honestly.”

After graduation, he returned to his hometown in 2009 and dedicated himself to his craft, building an oeuvre that has earned international recognition for Macao’s art scene. But like many local artists, Lai feels that an economy largely driven by gaming and tourism leaves little opportunity for the city’s creatives, and says he must teach part-time in order to support his lifestyle. “There are actually many exhibition opportunities here for local artists; however, what Macao lacks is an art ecosystem, which includes not just artists, but also critics, event curators, private collectors, galleries and others,” he says. “The situation has slightly improved in the past few years, with more people showing an interest in art, but Macao still lags behind [other places] in many fields.”

Despite the challenges, his artistry is a lifelong pursuit that Lai won’t be abandoning any time soon, using the canvas as a place to express ideas and feelings for the foreseeable future.

“Painting is part of my daily life now, and I still have so many ideas I want to explore but have not done so yet,” he adds.