Macau, China, 12 Dec –  Portuguese and English-language journalists called for self-regulation Monday, including the creation of an ethics code 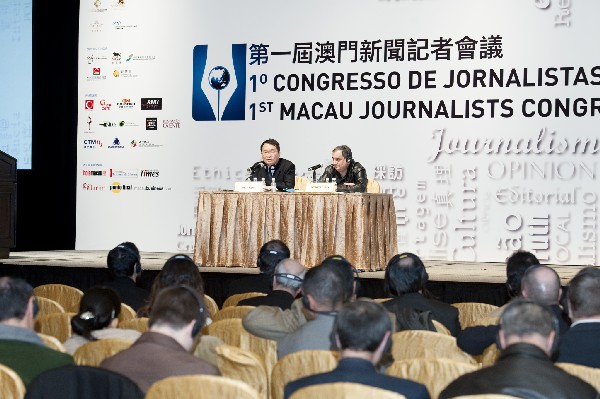 Macau, China, 12 Dec –  Portuguese and English-language journalists called for self-regulation Monday, including the creation of an ethics code during the first Macau Journalists Congress held in Macau.

According to today’s Macau Daily Times the improvement of the government spokesperson system was one of other requests made during the two days meeting.The event held during weekend brought to Macau experts and journalists from several countries.

According to the paper the most widely discussed topic was the revision of the local press and broadcasting laws proposed by the government.

The decision was born of a promise made by Chief Executive Fernando Chui Sai On while he was running for office, the head of the Government Information Bureau (GCS), Victor Chan Chi Ping, confirmed Sunday.

“There were several colleagues from the media who called for a revision,” the official said, stressing that the Press Council was never created even though it’s a mandatory body according to the current press law, approved over 20 years ago.

“As a government we cannot simply ignore the fact that a law has not been fully enacted. We must assume our responsibility,” Chan stated.

Victor Chan said that, even among people calling for a revision, there was no consensus on whether the Press Council should be created or if the body should simply be erased from the law.

“We haven’t promised what or how this revision will take place. All of that is up to you,” he told journalists.

Last year the government launched a consultation process on whether the press and broadcasting laws should be revised.

Authorities said that both laws were enacted before Internet changed the media world.