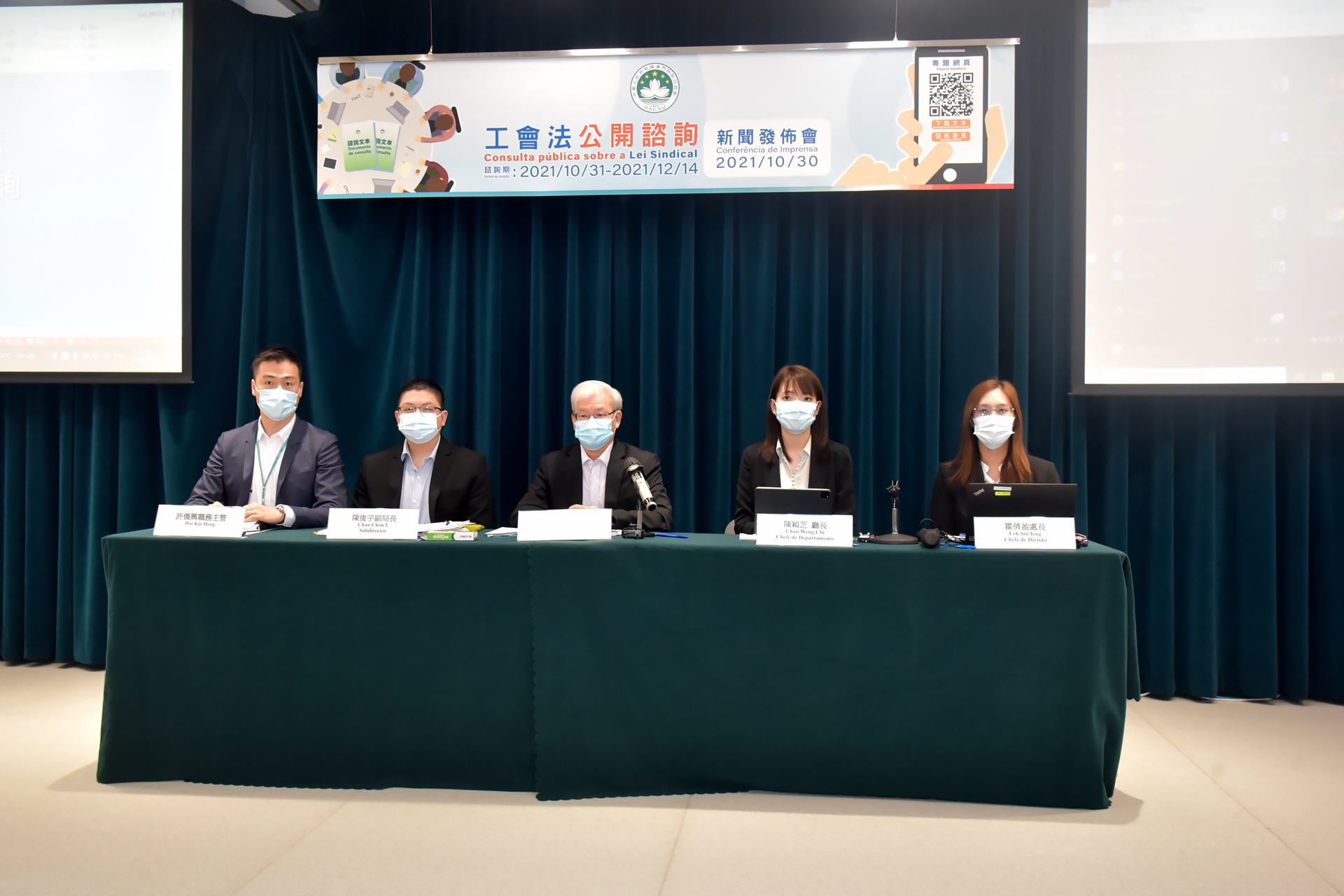 The government has launched a 45-day public consultation on the drafting of the city’s first-ever trade union bill.

The public consultation, which started yesterday, will end on 14 December. Four public sessions will be held during the consultation period.

He added that Macao now has the right conditions to formalise the legal position of the city’s trade unions through specific legislation, which would regulate employees’ right to form and join trade unions, the composition and functioning of trade unions and their rights and obligations.

Wong acknowledged that the drafting of a trade union bill is a major legislative project on the government’s labour policy.

Wong said that the government has now drafted its proposal on trade union legislation after researching the relevant regulations in a number of countries and regions, while considering Macao’s current laws and regulations involving trade unions, the city’s current social situation, and the setting-up and operations of the city’s existing trade unions and other associations representing various types of workers.

According to the public consultation document,  the government will base its legal system on trade unions to comply with the Basic Law, and while this stipulates that Macao residents have the right and freedom to form and join trade unions, the safeguarding of national security and Macao’s stability must be safeguarded.

The government is consulting the public on eight points for its proposal of a trade union registration system.

The consultation document proposes that trade unions may enjoy certain powers and functions, such as negotiating with employers about employment conditions, assisting in the resolution of labour disputes, giving the government suggestions on labour policy legislation and providing occupational training.

The government is proposing to bar employers from stopping their employees from joining or establishing a trade union.

The consultation document proposes that employers will be prevented from firing or demoting employees who have joined a trade union, or lowering their salaries.

According to the consultation document, the government is proposing that matters over which workers could collectively bargain with their employers should only cover fundamental employment conditions, such as their salaries, hours of work, holidays and occupational health and safety, while collective bargaining should not cover matters whose decisions are made by employers in line with their employees’ performance and the companies’ operational needs, such as the respective employees’ job promotions and transfers.

The government is proposing that the terms and conditions listed in an agreement reached through collective bargaining should also benefit those who work for the same company but have not joined the respective trade union, and those who are hired by the company after the agreement has been made.

The Legislative Assembly rejected a trade union bill for the 12th time late last year. A dozen trade union bills by various lawmakers have been submitted to the legislature since the founding of the Macao Special Administrative Region in December 1999. Macao is the only jurisdiction in China that still does not have a trade union law – unlike the Chinese mainland and Hong Kong.

Wong said that the bureau would publish a report in June next year summarising the opinions gathered from residents during the public consultation period, after which the government would start drafting the trade union bill and submit it to the legislature for debate and vote, The Macau Post Daily reported.