Officials set out seven criteria to support their decision, but fail to supply any precise reasons. 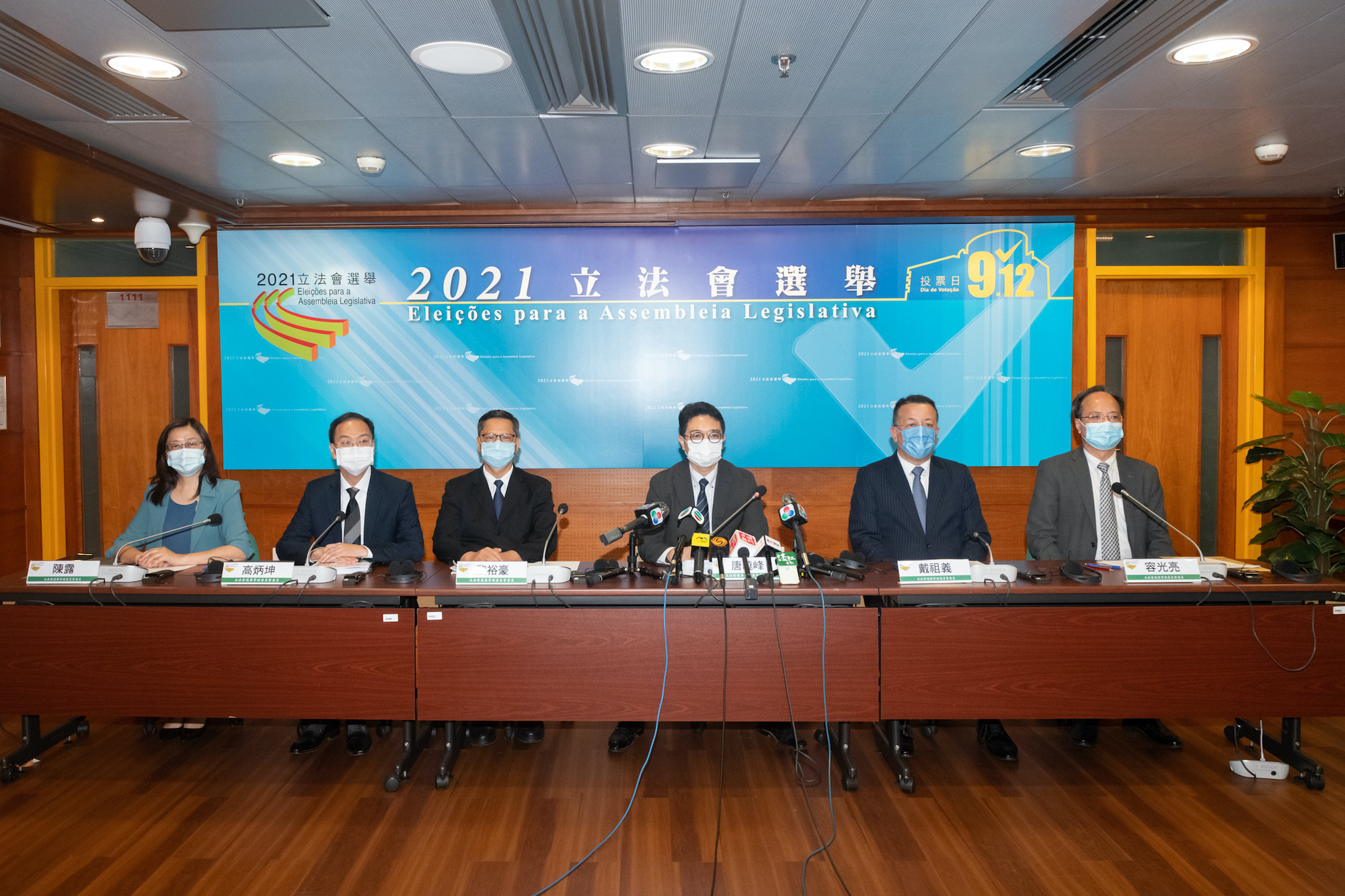 The Legislative Assembly Electoral Affairs Commission (CAEAL) yesterday insisted that evidence provided by the police indicates that the 21 election candidates from six direct-election Lists who have been disqualified have failed to support the Macao Basic Law or have been disloyal to the Macao Special Administrative Region (MSAR).

CAEAL president Tong Hio Fong said that the commission used seven criteria to assess the candidates’ qualifications with the aim of ensuring that they “sincerely uphold” the Macao Basic Law and bear allegiance to the MSAR.

According to Tong, the criteria were set up in line with the principle that upholding the Macao Basic Law requires supporting the nation’s Constitution as well, The Macau Post Daily reported.

In addition, according to Tong, the standards to assess the candidates’ qualifications were made based on the principle that upholding the leadership of the Communist Party of China (CPC) is an important factor for his commission to determine whether a candidate is qualified for the Legislative Assembly elections.

According to Article 6 of the Legislative Assembly Election Law, those who refuse to declare that they uphold the Macao Basic Law and bear allegiance to the MSAR are ineligible to be a candidate for the direct or indirect legislative elections.

According to the same article, candidates are also ineligible to run in the elections if “facts have proved” that they do not uphold the Macao Basic Law or are disloyal to the MSAR.

Legislative election candidates must sign a declaration confirming that they uphold the Macao Basic Law and bear allegiance to the MSAR.

The commission also said that it had assessed the candidates’ qualifications also in line with the Court of Final Appeal’s (TUI) ruling early last month which backed the police’s decision to disallow this year’s 4 June  vigil.

On Wednesday last week, the commission announced the preliminary acceptance of 159 candidates from 19 Lists vying for the legislature’s 14 directly-elected seats.

The Lists that have some or all candidates disqualified had the right to replace the candidates concerned by yesterday at the latest. Alternatively, the disqualified candidates could choose to insist that they have not failed to support the Macao Basic Law and have not been disloyal to the MSAR.

If the electoral Lists concerned chose to replace their candidates, the commission would then assess their qualifications and announce its decision tomorrow. If the Lists concerned chose to insist that they have always been upholding the Macao Basic Law and always have been loyal to the MSAR and consequently will not replace their candidates, the commission will also announce its decision tomorrow as to whether it accepts the lists’ positions on the matter.

Tong said that the legislative election law’s requirement for candidates to uphold the Basic Law and bear allegiance to the MSAR means that they must be patriots. The requirement aims to ensure the full adherence to the principles established in the  Basic Law, Tong said.

Consequently, Tong said, the commission has not only confirmed that the candidates have signed their respective declarations, but has also assessed whether the candidates have done anything that does not uphold the Basic Law or is disloyal to the MSAR.

The Constitution of the People’s Republic of China (PRC), which is the country’s fundamental law, is the basis for the formulation of the Basic Law, Tong pointed out, adding that upholding the  Basic Law necessarily requires the upholding of the Constitution and the principles enshrined in it, such as “One Country, Two Systems”, “Macao people governing Macao”, Macao’s “high degree of autonomy”, and the leadership of the Communist Party of China (CPC).

Consequently, Tong said, the Legislative Assembly election candidates must “sincerely” uphold the  Basic Law, the nation’s Constitution and the principles enshrined in it.

“Patriots necessarily safeguard sincerely the nation’s sovereignty, security and development interests,” Tong said. “Patriots necessarily respect and safeguard the country’s fundamental system and the constitutional order of the MSAR. Patriots must not engage in any activities that jeopardise national sovereignty and security, challenge the central authorities’ power and the authority of the  Basic Law, and make use of Macao to infiltrate and destroy the mainland.”

Tong pointed out that the first session of the 13th National People’s Congress (NPC) in March 2018 passed amendments to the nation’s Constitution, according to which in Paragraph 2 of Article 1 of the Constitution, after stating that “the socialist system is the basic system of the People’s Republic of China”, a new sentence points out that “the defining feature of socialism with Chinese characteristics is the leadership of the Communist Party of China”.

Tong said that the amendments fully embody the ruling position of the CPC, because of which, he said, whether a candidate upholds the leadership of the CPC has become an important factor in his commission’s candidacy qualification review process for this year’s Legislative Assembly elections.

Consequently, Tong said, the commission has set up seven criteria to assess the candidates’ qualifications.

Tong repeatedly reaffirmed that criticising the administration of the Macao government is not regarded as failing to uphold the Basic Law or being disloyal to the MSAR, so candidates who have done so are qualified to run in the 12 September election.

Tong also repeatedly underlined that for the time being the commission could not reveal further details as to the reasons why particular candidates have been disqualified as otherwise, it would have affected their appeals to his commission and their possible appeals to the Court of Final Appeal (TUI).

Meanwhile, Tong said that only one List, whose identity he did not reveal, had requested to be allowed to replace its candidates.