They may not eat meat, but this bunch of super-powerful paddlers are ready to take on all comers in this year’s races. The Macao International Dragon Boat Races are one of the year’s greatest outdoor sporting events, a terrific hullabaloo of aquatic noise and excitement as paddlers pit their muscles and their wits against each other in a contest that’s fun as it is hard-fought.

Taking centre stage this weekend, the races draw scores of teams, with the small boats powered by 10 paddlers racing 200 metres and the larger ones with twice as many crew racing 500 metres, each urged along by a frantic drummer perched in the bow and skilfully steered by a cox crouched in the stern.

But of all the more than 340 teams taking to the water this year, one stands out.

Veggiesaurus is the only vegetarian dragon boat race team in town. Founded in 2017 by ten vegetarians, vegans and other folk leaning towards a meat-free diet, Veggiesaurus is living proof that shunning meat doesn’t turn you into a weakling. Eat your heart out, carnivores.

It’s often said that the parts are greater than the whole. Each Veggiesaurus paddler has a tale to tell – about what led them to more healthy eating habits and how it’s had an effect on their life.

A stroke of luck

Andy Wong Chi Kuan, 40, one of the team’s founding members, became a vegetarian in 2012 after a stroke paralysed the left-hand side of his body.

A muscular vegan friend who practiced taekwondo and Wing Chun boxing suggested Wong should restore his health by turning vegetarian.

First Wong quit seafood, then meat, and then he went wholly vegan, shunning eggs and dairy products. At the same time, on the advice of his acupuncturist, he jogged and played badminton to restore the coordination that had vanished completely after the stroke.

“At that time, I could not even walk backwards,” Wong grimaces.

After going vegan, he first started to notice subtle and then bigger differences. His strength came back and he was able to make some old familiar movements again.

“After going vegan, I came to notice the amount of time I needed to rest after exercise was getting shorter,” he says.

“In 2016, I took part in the Standard Chartered Hong Kong Marathon. I ran for six hours but it only took me two hours to recover.”

Before his stroke, Wong was sports mad, dragon boat paddling, canoeing, and playing five-a-side football, water polo and basketball whenever he could.

In 2018, Wong met some of the Veggiesaurus team and it inspired him to return to dragon boat paddling. 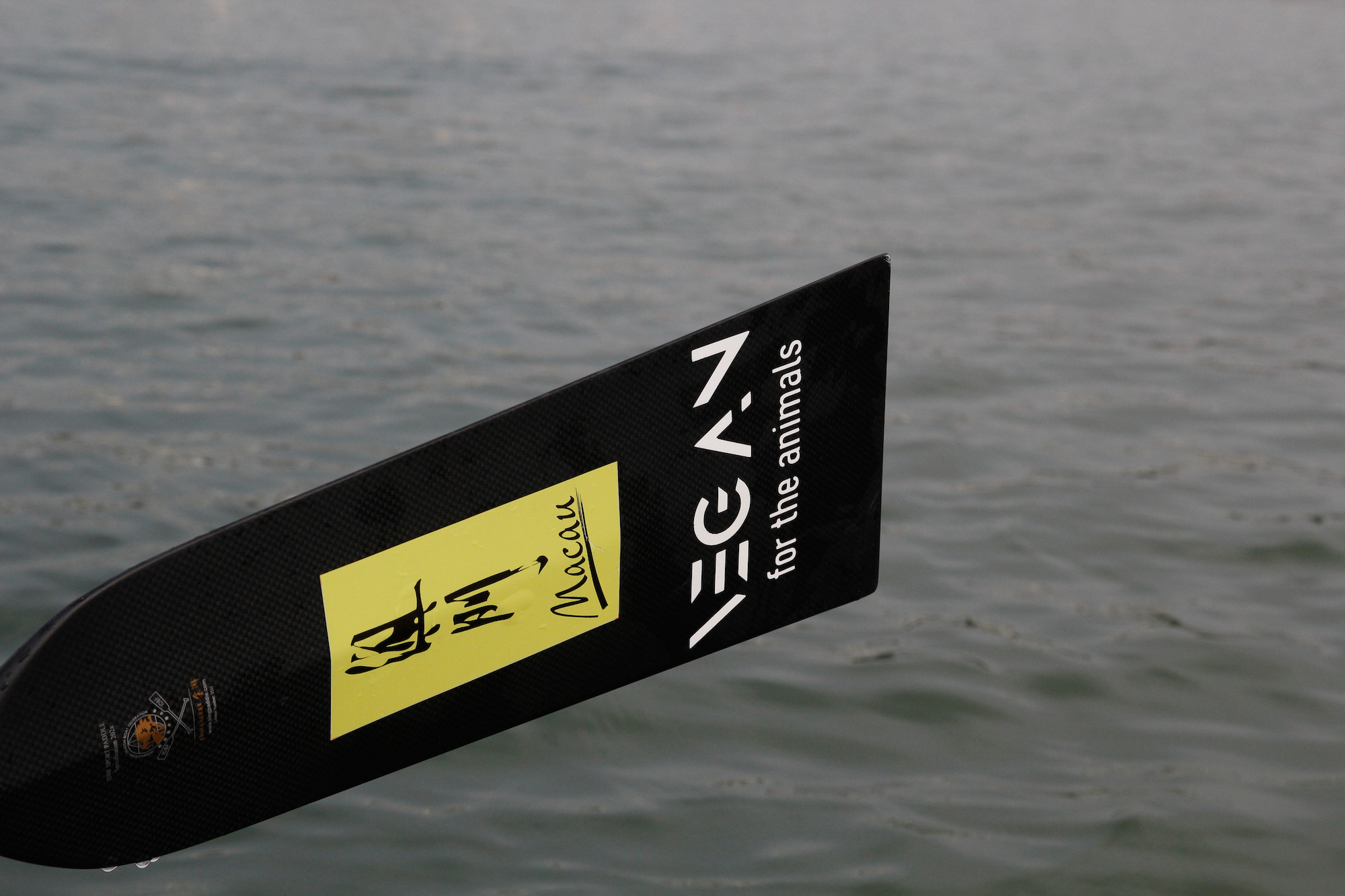 “The team spirit of dragon boating is so strong,” he says. “It’s totally different to sports like football or basketball, when you get criticised if you miss a shot, even though it was not your fault.”

Looking back on the years recovering from his stroke, Wong feels grateful for the opportunity to recalibrate his lifestyle. “I used to eat a lot of meat,” he says.

“I love rich flavours. I didn’t pay much attention to my health because I was young. Ironically, if I hadn’t had a stroke, I don’t think I would be able to lead a healthy life once I turn 50.”

His girlfriend, Josie Leung, prepares meals for him even though she is not vegetarian. “We looked up recipes, especially Japanese ones, on Instagram,” says Wong. “We love Japanese food, such as tofu and seaweed soup. It tastes delicious and tofu has a lot of protein.”

Wong hopes that after the pandemic Veggiesaurus will compete in dragon boat races in South Korea and Japan. “There’s a strong dragon boat culture in Southeast Asia. It would be delightful to go there with the team.”

Lei, 30, joined Veggiesaurus in 2020, the year after he went vegan and two years after taking up paddling.

Standing 180cm tall, and with his biceps bulging like balloons, Lei scoffs at the myths circulating about vegans and their supposed lack of strength.

“Many people think vegans or vegetarians do not have enough strength to paddle,” he says.

“Due to some old-fashioned commercials and films, it is generally thought that we are weaker than meat eaters, or that only poor people are vegetarians.”

In terms of training, Lei has experienced few differences since becoming a vegan. “Before I thought I could only build up muscles by eating a lot of meat, but now I realise protein comes from plants. Meat is second-hand protein – beans, tofu, and Omnipork are much better. If we consume enough protein, we gain strength.”

The Veggiesaurus team bonds over a meal and a morning work-out. “We usually exercise together for an hour and a half – doing yoga, animal flow movement and High-Intensity Interval Training,” says Lei.

Eating out grants fewer choices to Lei and his fellow non-carnivores, and while there are more vegetarian restaurants in Macao than there used to be, they are still few and far between. Not that that bothers Lei.

“Having not many options is good, so I don’t have to spend time choosing,” he says.

“There is always a way. When I eat at a chachanteng, I tell the owner that I do not eat meat, eggs or dairy products. They can always make something for me.”

Since becoming a vegan, Lei can tell he recovers faster after doing an intensive work-out, such as dragon boat paddling or exercise at the gym.

“Also, when I ate meat, I always felt tired after dinner. I lay down on the sofa and rested. But now, I feel energetic even though I have had a big meal, especially something like steam minced veggie pork with mei choy (preserved vegetables) and fried tofu and tomatoes, which I really enjoy making for myself.”

Calista Chan, 33, top paddler and one of the founding members of Veggiesaurus, fell hook, line and sinker for dragon boating in 2012. She has been working out regularly since becoming a vegan in 2015, and says she can feel she revives faster after having an intensive work-out. “My muscles used to feel sore after working-out. But since I’ve become a vegan, I recover quickly because vegetables tend to have high oxidising agents.”

Chan makes sure her daily diet contains five colours – red, green, either yellow or orange, white, and either blue or purple. When preparing for a dragon boat race, she tends to eat more carbohydrates, such as pasta, bread, pumpkin, and potatoes because of the high energy consumption.

Her lifestyle is inspired by Concept H Macau, her shop on Rua de Henrique de Macedo, which sells organic and Fairtrade products, and serves fresh meals made with organic ingredients.

“I want my customers to discover green lifestyle concepts here, such as vegetarianism, low-sodium diet and five-colour diets,” says Chan, who opened Concept H in 2014.

Her shop motivated Chan to become a vegan. During 2014, she started having one vegetarian meal each day. In 2015, she became a vegan. “Vegetarianism is a sustainable diet. Veggie food, especially fruits and vegetables, are high oxidising agents. There are a lot of nutrients that we don’t need to consume through meat only and being a vegetarian or vegan can improve our metabolism.”

The 2021 Macao International Dragon Boat Races, which will take place on 13 and 14 June, will have no spectators due to the latest Covid-19 developments in neighbouring cities.