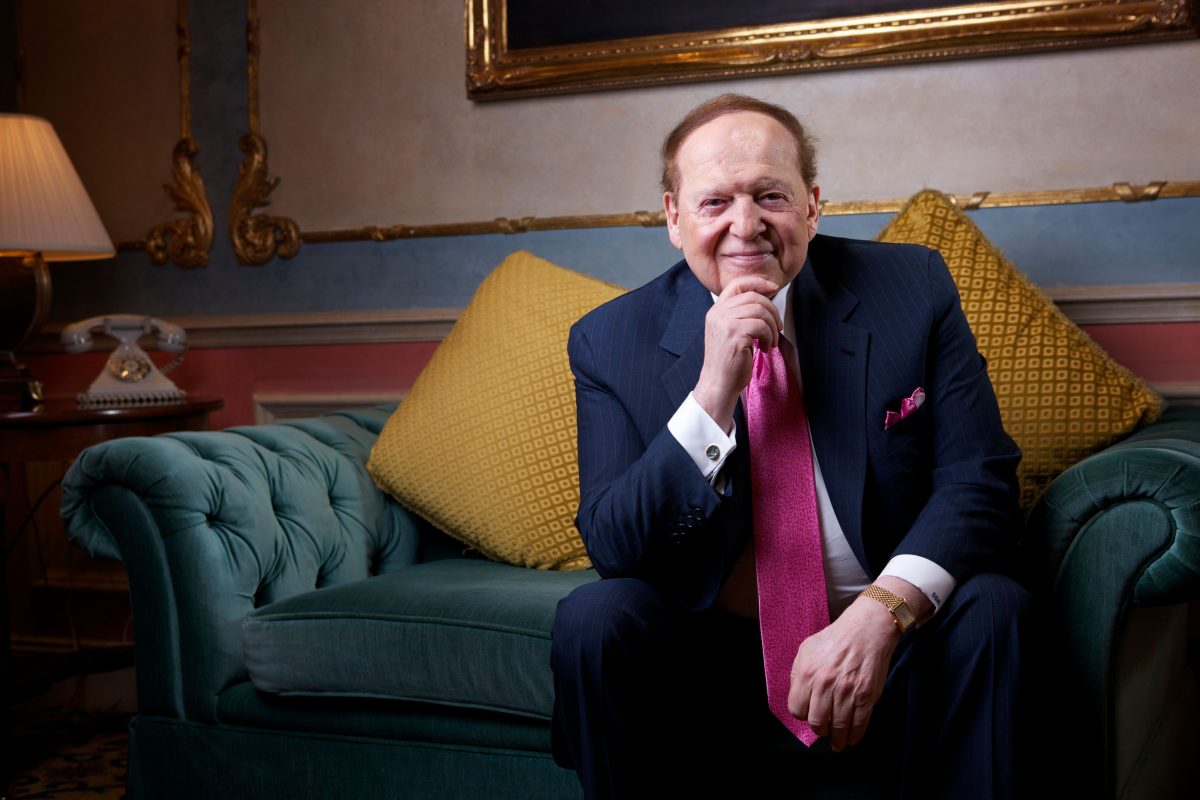 Adelson was a larger-than-life figure in both government halls and gaming hubs around the world. And as a dynamic business leader and outspoken operator, he left an indelible mark on global business and politics.

In Macao, especially, his loss will be deeply felt. It was Adelson’s vision, fortune, and conviction that transformed the once sleepy Portuguese enclave into the glitzy, booming gaming destination we know today.

Adelson was born in Boston in 1933 to a working-class family of Jewish immigrants, who were stalwart Massachusetts Democrats. With four children to support, Adelson’s father drove a taxi, and his mother ran a knitting shop.

Though Adelson could claim a fortune of more than US$33 billion when he died, he was proud of his working-class roots, recounting that he had slept on the floor of his family’s one-room tenement apartment as a child. He described the neighbourhood where he grew up as the “slums” and proudly stated in interviews that his grandfather was a Welsh coal miner.

The billionaire got his start in business as a precocious 12-year-old, selling newspapers in Boston before diversifying into a local candy vending machine business by 16. While Adelson was a natural entrepreneur and hard worker, he struggled to flourish in other avenues of his life; he never graduated from the City College of New York and opted instead for a short stint in the US Army.

Adelson was a consummate businessman, who relished in the mechanics of running a company more than having an affinity for any particular product. Before breaking into the casino business, Adelson would sell everything from candy and toiletry kits to de-icing spray for car windshields. He even ran a tour bus company.

The American made his fortune – or more accurately, his first fortune – launching some of the earliest US technology trade shows, including COMDEX, which he sold to SoftBank Corporation of Japan for US$862 million in 1995.

Surprisingly, Adelson didn’t get into the casino business until he was 55 years old. But it was there that Adelson found both purpose and a means to truly enormous personal wealth. Adelson purchased the historic Sands Hotel and Casino in Las Vegas in 1989 and quickly expanded his gaming empire.

Gambling proved a perfect fit for Adelson, combining his passion for wealth, business and the thrill of high-stakes risk-taking. From his earliest days in the casino business, he showed genuine vision, championing projects that his peers could not imagine.

After a memorable honeymoon in Venice in the early 1990s, for example, Adelson parlayed the experience into one of Las Vegas’ first mega-resorts and casinos: The Venetian. To the shock and consternation of Vegas’ old guard, Anderson demolished The Sands to make room for The Venetian, which set the tone for the current era of destination gambling.

In the early 2000s, when Macao began revising its casino licensing laws and opening to foreign investment, Adelson swiftly took notice. And it is in Macao where the influence of his vision is most profoundly felt. In opening the Sands Macao, China’s first Las Vegas-style casino, in 2004, Adelson irrevocably changed the city’s economy, identity and the skyline itself.

The Cotai area, in particular. Where earlier developers had only seen swamp, Adelson saw opportunity. He transformed the marshy land between Taipa and Coloane islands into the Cotai Strip. It quickly became the gilded, pumping artery of the new Macao, as Adelson opened a series of resorts – including The Venetian Macao in 2007 – across the next two decades. The gambling mecca would quickly eclipse Las Vegas, bringing in nearly six times that city’s gambling revenue in 2018 and making Adelson one of the richest people on earth.

Today, the Las Vegas Sands Corporation is the world’s largest casino operator. And in 2019, the success of Adelson’s property in Macao boosted stock prices, earning him an additional US$2.2 billion in one week alone, according to Forbes.

As in so many arenas of his life, Adelson’s influence on Macao has been divisive. Many residents decry the rapid changes he brought to the city, transforming it from a charming, slow-paced port city into a teeming pleasure dome, a glittering apotheosis of the Dollar and Yuan.

What’s more, Adelson’s investment and efforts turned Macao into a company town in less than a decade – even as the economy boomed, its diversity dwindled. Still, his influence on modern Macao is impossible to exaggerate. In terms of his ability to change a city so profoundly in a matter of years, Adelson counted among his peers not just businessmen but statesmen like Ibn Saud, the first monarch and founder of Saudi Arabia, and Lee Kuan Yew, the founding Prime Minister of Singapore.

As Adelson’s wealth and notoriety grew, so did his infamy. A deeply polarising figure, Adelson’s career was dogged and defined by controversy. The man, who grew up in a proudly Democratic, union-loving Boston family, became a standard-bearer for the American right-wing. And Adelson, who once said that wealthy people should stay out of politics, is now best known in his home country as a political mega-donor, showering conservative causes and candidates with hundreds of millions of dollars.

For many, Adelson served as a symbol of the outsized role of money in American politics. While he claimed that he embraced the Republican Party for their support for charity, Adelson’s hawkish devotion to Israel and his contempt for both labour unions and taxes seemed most in-line with the modern GOP.

Controversy also followed him to Asia when, in 2004, a former Hong Kong-based business associate Richard Suen, who claimed to have helped Adelson acquire his first casino license in Macao, sued Las Vegas Sands to the tune of US$101.6 million alleging a breach-of-contract. Adelson also spearheaded doomed forays into both the Japanese and North Korean gaming markets, efforts marred by accusations of corruption.

While a controversial figure on both sides of the Pacific, Adelson’s singular vision was undeniable. He saw potential where others saw only quagmire: in the undeveloped backwaters of Cotai, in the straightlaced city-state of Singapore (where he opened the wildly successful Marina Bay Sands in 2006), and in the political aspirations of discredited real estate developer and reality TV personality Donald Trump. Adelson is believed to have spent upwards of US$250 million on the outgoing president’s reelection campaign and other Republican causes during the 2020 election cycle, according to The Guardian.

With his passing, Macao lost one of its greatest champions. Today, Macao is home to 41 casinos – five owned Sands China, a subsidiary of the Las Vegas Sands Corporation – each owing their existence to Adelson for his early vision and unwavering confidence in the city as a gambling destination.

His death came at a time of great uncertainty for casinos, as Covid-19 gutted the gaming industry. At the height of the pandemic last year, Las Vegas Sands was the only gaming operator in Vegas that did not furlough or layoff staff, instead paying them through the crisis, Adelson wrote in an April 2020 op-ed for the New York Post. Las Vegas Sands Corp saw revenue plummet 82 per cent in the third quarter of 2020, compared to the year prior.

Even with the industry in turmoil, Adelson remained confident in Macao’s future. In 2020, Sands China opened the Grand Suites at Four Seasons, and announced that it would spend US$2.2 billion to convert the Sands Cotai Central into The Londoner Macao, which is opening in phases throughout 2021.

Adelson had been battling non-Hodgkin’s lymphoma, a form of blood cancer, since early 2019, and on 7 January 2021 stepped down from his duties as chairman and chief executive officer of Las Vegas Sands for further cancer treatment.

Whether Adelson was a force for good in Macao or the world at large will be hotly debated for years to come. Still, Adelson’s fans and detractors can all agree that he had what his friend Donald Trump would have called “guts”.

In 2009, when his fortune shrank by more than 90 per cent – it would mostly recover by the time of his death – his response was typical of the risk-loving Adelson. When asked if he was afraid for his declining fortunes, he told ABC News in 2010 that there is “no such thing as fear, not to an entrepreneur.”

He is survived by his wife Miriam Adelson and his four children. He is preceded by his son Mitchell, whose 2005 drug overdose led his father to become an outspoken opponent of drug legalisation.