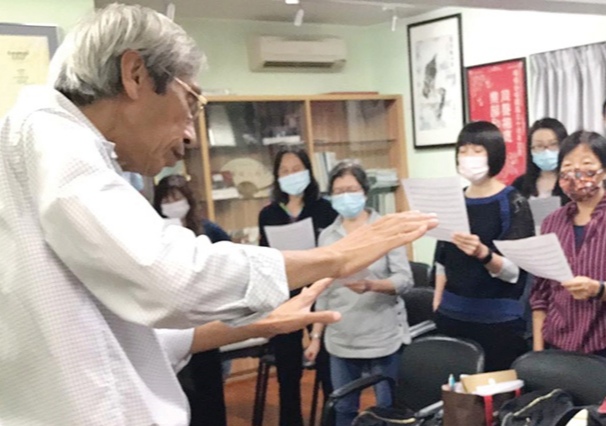 They will be performing and publishing one of the pieces entitled “Missa Solemnis” in November, the conductor of the choir, João Ng Seng Hong, told the Macau Post Daily at its office last week.

“In recent years, people have been calling Macao a ‘cultural desert’. However, there is actually a lot of culture hidden underneath this dazzling city for people to uncover,” Ng said after telling the story about the lost Mass that his choir is going to perform at São Lázaro Church on 14 November.

According to Ng, the Perosi Choir was founded in 1997 and was registered as a non-profit music body in April 1998. Ng said that the choir has been holding annual concerts ever since its establishment and has travelled to Hong Kong, mainland China and Austria on many occasions for performances and the promotion of Macao’s local choral compositions.

Ng recalls that a manuscript of a full Mass was discovered at a second-hand stall in Lin Kai Temple in 2009. He said that he spent a year to prove that the piece was written by Fr Guilherme Schmid, who was in charge of all musical matters at St Joseph’s Seminary of Macao from 1939 to 1966, but it was copied by Fr Cesare Brianza of the Salesians of Don Bosco. He added that he then spent two years proof-reading and reworking the Mass, before performing and publishing the Mass, entitled “Father Guilherme Schmid’s Mass in B Flat Major”, in November 2012.

According to Ng, Fr Schmid was born in Hornstein, Austria, in 1910. He studied theology and philosophy in Germany and learnt music at Vienna Conservatory. In 1939, Fr Schmid was invited to run St Joseph’s Seminary in Macao and stayed until 1966 when he retired to Austria. Ng pointed out that during Fr Schmid’s stay in Macao, he wrote many sacred pieces in Chinese and Latin, adding that his works were often performed in public.

“When Father Schmid left Macao, he did not take any of his compositions he had written between 1939 and 1966 home to Austria. We later found that he wrote in one of his letters that ‘all the music compositions I wrote in Macao will be reserved for my children in Macao,’ unfortunately, not all his work was preserved,” Ng said during the interview.

Ng said in 2010, Fr Schmid’s hometown hosted a celebration in remembrance of him and Ng’s choir was invited by Mayor Herbert Worschitz to perform Fr Schmid’s compositions that he wrote in Macao.

“After our performance, people came up to us and said they envy the people in Macao because Father Schmid wrote such beautiful pieces for us,” Ng said with a smile on his face.

Ng said that when they visited Fr Schmid’s hometown, the people showed him a list that Fr Schmid wrote, adding that it was a list of major compositions he wrote in Macao. Ng added that one of the Mass compositions was written for the crowning ceremony of a statue of the Virgin Mary, which took place in Shanghai.

“Since then, I have been thinking that maybe the ‘Mass in B Flat Major’ is the Mass composition Father Schmid wrote for that ceremony. There are hints in the melody, minor details in the composition and the atmosphere of the song that supported my assumption but I do not have concrete evidence to prove that the ‘Mass in B Flat Major’ is related to the ceremony,” Ng said.

However, he did not give up easily and tried to look for evidence in Shanghai and at St. Joseph’s Seminary of Macao, but up to now he still has not gathered enough evidence to prove his assumption, according to Ng.

Ng said when he was searching for more evidence in 2013, he was able to get in touch with Fr Lau Chi-ming, who studied at St Joseph’s Seminary when Fr Schmid was still working there.

“Unfortunately, when I asked him about the Mass written for the ceremony in Shanghai, he said he knew nothing about it. However, he had copied four of Father Schmid’s works that he liked by hand when he was little,” Ng said in an upbeat tone.

Ng said when he looked at the manuscripts, he was overjoyed to find out that there were two Mass pieces that he had never seen, adding that one of them was the piece his choir is going to perform – “Missa Solemnis”.

“I was looking for one thing and found another!” Ng said, giggling.

Ng pointed out that the original composition was written for an all-male choir, with four parts – two tenor parts and two bass parts. However, Ng said that his choir did not have enough male vocals to present the piece in its original form, hence he needed to rework the piece to soprano, alto, tenor and bass. He noted that because it is a hand-copied manuscript he spent quite some time proof-reading it to ensure that when he published the piece it will be the original or closest to its original form.

“If Macao has an all-male choir, I would like to perform it the way Father Schmid composed it,” Ng said.

Ng also said that due to the novel coronavirus pandemic, his choir was not able to practise from January to June, so his choir could only perform one of the five parts of the Mass, Kyrie, at their upcoming concert and the full version next year.

“I think these two compositions are very significant to Macao’s culture and music industry. The two pieces are representations of Macao’s music development and history. If this were to happen in European countries, it would be massive news,” Ng said.

However, he admitted that he is saddened by the fact that a lot of musical works were not preserved properly, adding that this could be because the people do not prioritise the importance of the local music and cultural industry.

Ng listed a few local composers such as Padre Aureo Castro Nunes e Castro and Doming Ngok-pui Lam whose music embeds the uniqueness of Macao culture. He pointed out that Fr Aureo Castro was immensely interested in Chinese culture, so in his music, there is a subtle hint of Chinese-ness that is different from European music.

When asked how Ng would describe the uniqueness of Macao music, he said that people always say it was like “when East meet West” but it was more than that.

“I don’t think the word ‘meet’ is a suitable description. I think it is like a ‘yin and yang’ which shows a balance between East and West with a portion of each other’s elements in each other,” Ng said.

Ng added that especially religious music and scared compositions in Macao are braver and more special than the other countries’ music. He said that it could be because Macao churches have their own music composition style.

Ng said that his own compositions were also affected by Macao-style music. He pointed out that he never received a formal education in music but self-taught most of his music knowledge – a real autodidact. He added that therefore his music style is different from the one in Macao’s churches but similar in a sense that it challenges the conventional way of music composition.

When asked whether Ng thinks Macao is a cultural desert, he rejected the idea firmly. He said that Macao’s culture is infinite, adding that there are many things underneath the surface for people to uncover.