Testing continues in three key areas after Covid-19 case detected on Saturday; government criticised for allowing music fest to go ahead at Ruins of St Paul’s. 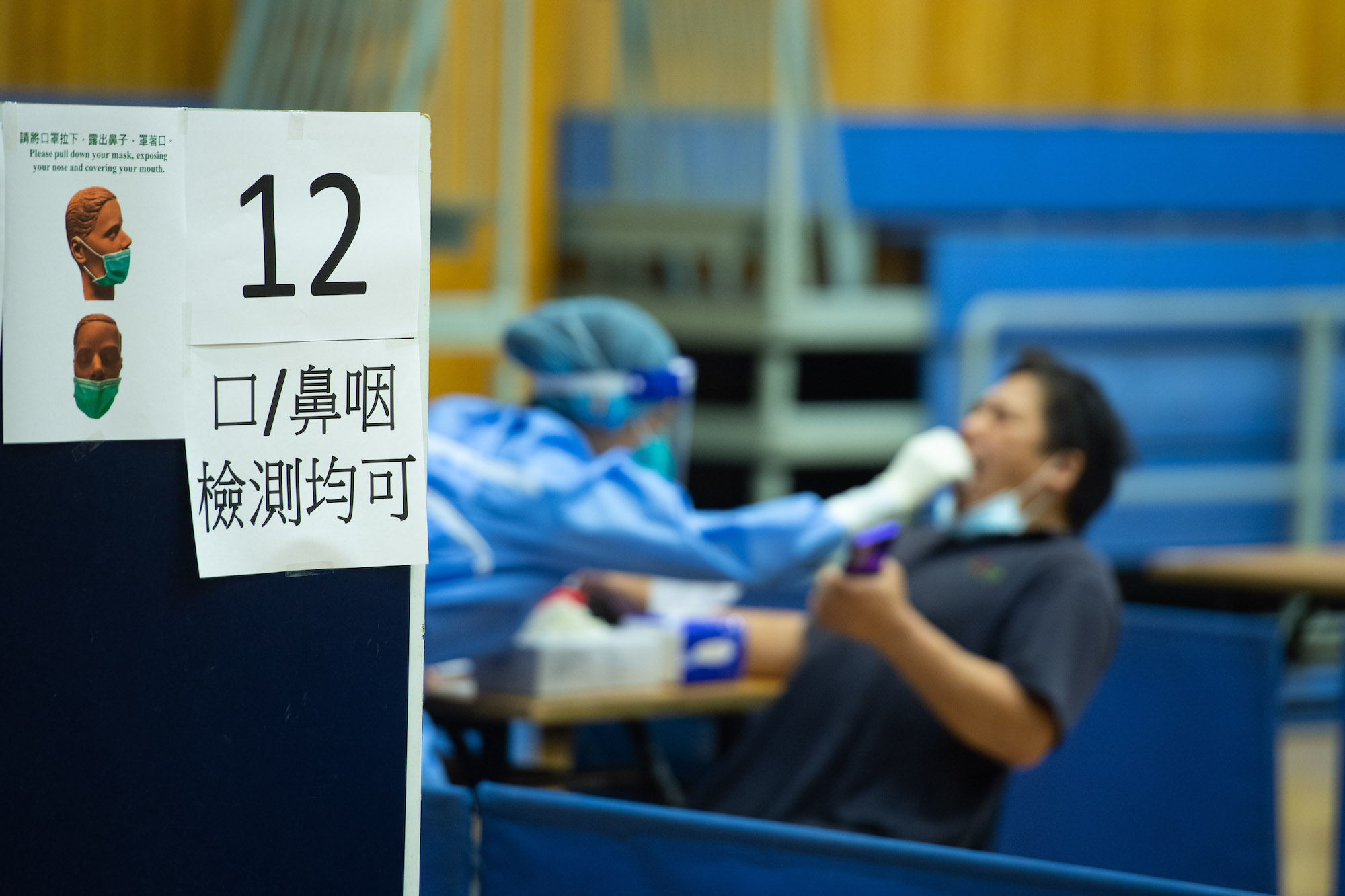 There will be no immediate citywide Covid-19 tests, despite the most recent case of a mainland Chinese visitor which was detected on Saturday.

Secretary for Social Affairs and Culture Elsie Ao Ieong U said there was no need to launch a mandatory nucleic acid testing (NAT) drive because there was no sign of Covid-19 community transmissions.

The case triggered the government’s ongoing five-day NAT campaign for three high-risk key areas, which started on Saturday afternoon. All those who live or work in the three key areas are required to undergo four nucleic acid tests in five days.

The case, a 60-year-old female tourist from Suzhou, was announced by the Health Bureau (SSM) on Saturday morning, stating that a batch of mixed samples collected from the NAT sampling station at the Sands Macao casino-hotel in NAPE tested positive for Covid-19 in the early hours of Saturday. Consequently, the SSM contacted the respective testees to undergo a follow-up individual-sample NAT, after which the bureau confirmed that it was the 60-year-old tourist who tested positive.

According to the SSM, the woman flew from Suzhou to Zhuhai with her husband and younger sister on Monday last week. They underwent a NAT at Zhuhai airport, and all of them came up with a negative result, after which they entered Macao from Zhuhai via the Barrier Gate checkpoint that night. They checked into Harbourview Hotel at Macau Fisherman’s Wharf, which is located opposite the Sands Macao casino-hotel.

During their stay in Macao, the trio visited numerous restaurants and tourist attractions on the peninsula as well as several integrated resorts in Cotai before the 60-year-old woman was diagnosed with Covid-19.

The bureau said that the 60-year-old came down with a cough on Tuesday morning last week, before developing a fever on Wednesday night when she returned to the hotel guestroom. However she did not seek treatment for her fever, and only asked her husband to some buy medicine from a pharmacy.

While the 60-year-old stayed in the hotel guestroom all day Thursday, she went sightseeing with her two family members around the city on Friday. They underwent a NAT at the Sands Macao sampling station that night, and one of them, the 60-year-old woman, came up with a positive result.

The 60-year-old was transferred to the Public Health Clinical Centre in Coloane for isolation treatment after she had been diagnosed with Covid-19 in the early hours of Saturday. Her two family members have meanwhile been transferred to quarantine for medical observation.

Harbourview Hotel was locked down on Saturday, so guests and staff have been required to remain in the hotel for quarantine until Thursday, 24 November and undergo NATs. The SSM has classified the 60-year-old woman’s case as imported because she started to come down with Covid-19 symptoms the day after entering Macao.

In line with the three-member family’s visit history during their stay in Macao, the government classified three high-risk key areas subject to four mandatory NATs carried out over five days. The campaign started at 4 pm on Saturday. All those who live or work in the key areas are required to undergo four tests between Saturday last week and Wednesday.

The first key area covers Macau Fisherman’s Wharf and Sands Macao. The second covers an area in the vicinity of the Ruins of St Paul’s and Mount Fortress, while the third  extends around São Lourenço Church, A-Ma Temple, and Ha Van (Praia do Manduco) district.

Under-threes are exempted from the campaign. As of last night, no Covid-19 positive results had been reported.

Speaking at the end of the Macau Grand Prix, Ao Ieong insisted that for the time being there was no sign of the occurrence of Covid-19 spreading in the city following the Covid-19 detection of the 60-year-old tourist, so the government has concluded that for the time being there is no need to carry out mass NATs. She said that the case has only resulted in a relatively low Covid-19 community transmission risk.

Nevertheless, Ao Ieong said that as the 60-year-old tourist had visited many venues in the city, the government has launched an NAT campaign for the three key areas with the aim of confirming whether the novel coronavirus is spreading in the community.

Ao Ieong urged those affected by the NAT campaign to comply with the government’s work against Covid-19 with the aim of helping rule out a potential Covid-19 community risk.

The Cultural Affairs Bureau organised a music festival in front of the Ruins of St Paul’s on Saturday evening where a large number of residents and visitors gathered. Some members of civil society criticised the government for holding an event involving massive crowd gatherings following the Covid-19 detection of a tourist with an extensive travel history, while simultaneously requiring those in key areas to undergo four nucleic acid tests in five days.

When asked about the matter, Ao Ieong said that after an assessment for potential Covid-19 risks, the government had concluded that the music festival could be held as scheduled. She said that according to the central government’s latest guidelines on Covid-19 prevention, normal economic and social activities in a certain place can continue to be carried out if there is no sign of the occurrence of Covid-19 community transmissions there.

Ao Ieong also said that those in key areas subject to mandatory regular NATs are not barred from travelling around the city.