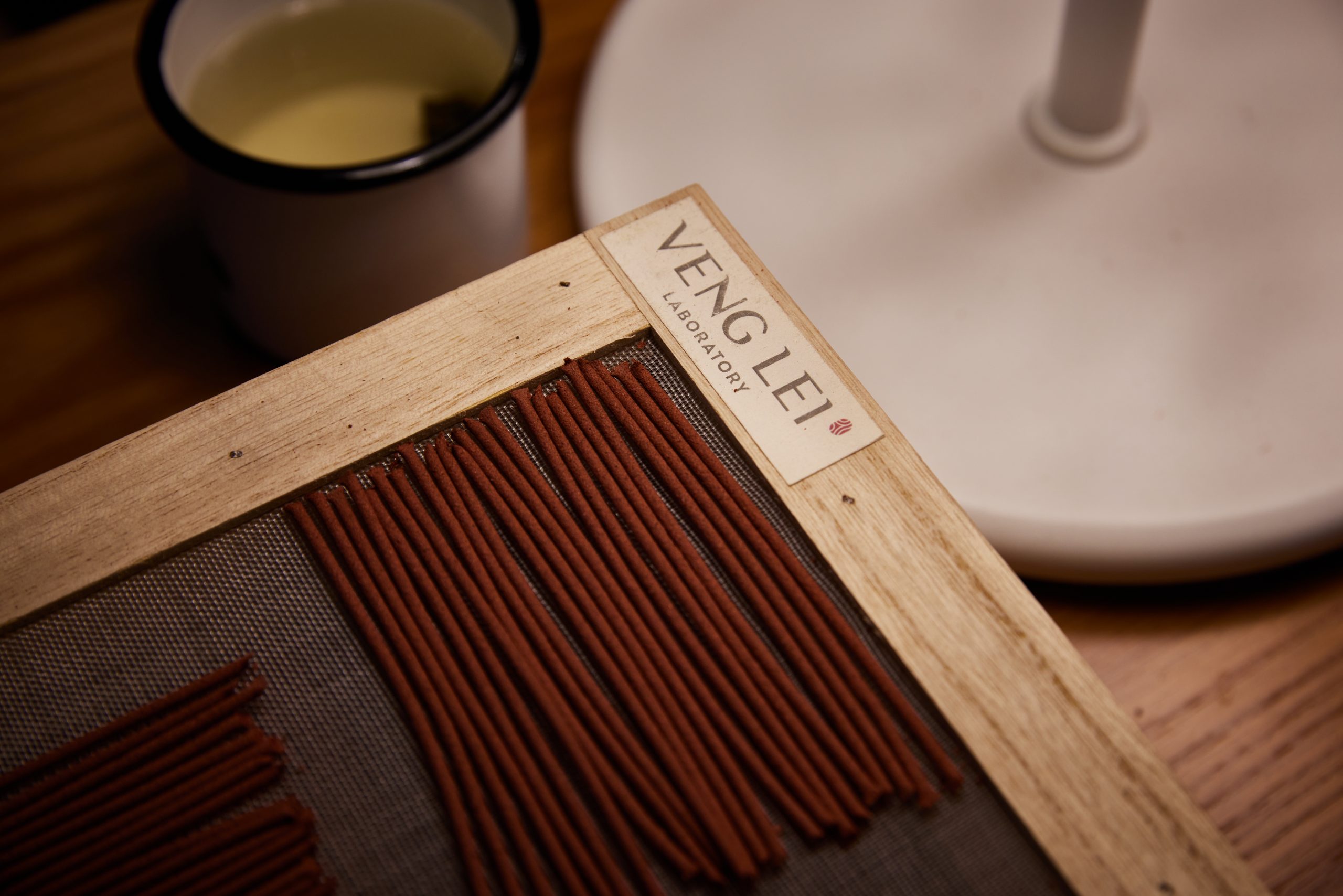 Thirty-six years is a long time to wait to re-open a business. But that’s just what Keng Si Wong and his girlfriend, Kim Chen, did when they opened the doors to the historic incense shop, Veng Lei Laboratory, in May of this year.

For 43 years, the shop once served Macao’s residents, producing and selling traditional incense and joss paper, or paper crafts burned as offerings to Chinese deities and ancestors. The business was first opened by Keng’s grandfather in 1942. It was originally located in Rua da Praia do Manduco, near Macao’s inner harbour area where fishermen would embark from.

Keng remembers his grandmother explaining to him that those going out to sea would burn joss paper in offering, to ensure their safe return to shore. “At that time, the shop had so many people coming in to buy joss paper – the business was really booming.”

His grandfather, Chan Lai, was born in 1900 was taught at an early age the art of making joss paper and incense, a major industry in Macao back then, and a common trade for people to pick up. He would eventually open his own store, Veng Lei Paper, moving his wife and seven children into the residence above it. Everyone pitched in and helped run the business over the decades, according to Keng.

Sadly, Veng Lei closed down in 1985 when the government reclaimed the rented shop to redevelop the area. It was a momentous change for Keng’s family members, who had to leave the family business behind and pursue new career paths.

“My uncles and aunts all went to work in other places after the shop closed down,” he explains. “But they’re all creative individuals – they do calligraphy, sculpture, writing, or Chinese paintings of flowers or dragons and phoenix (龍鳳彩繪).”

Keng says that he never got to know his grandfather as he passed away before Keng was born, but heard many stories about him and Veng Lei Paper from his grandmother. By reopening the family business, Keng says he hopes to preserve some of its traditions while at the same time, modernising incense and its everyday uses to attract a younger generation of clientele.

Keng was born in Macao in 1993 and his partner, Chen, in Taiwan in 1995. They met each other as students in the same art programme at Kun Shan University in southwestern Taiwan. After they graduated in 2017, Chen continued his studies at the Beijing Film Academy, while Keng moved to Taipei National University of the Arts.

When they completed their graduate studies just as the pandemic worsened, the two decided they were in need of a new adventure. Keng, harking back to the stories of the family business, broached the idea of re-opening his grandfather’s old incense shop.

The idea quickly took root; five days later, the couple arrived in Macao and began the process of planning and opening their own business. It was Keng’s grandmother, Zaak Wai Yin – by now a centenarian – who taught him the tricks of the trade, opening up a trove of valuable resources that she had stored for nearly 70 years including electricity bills, delivery notes and business registrations, as well as joss paper and incense sticks from the old shop.

Keng already had some background in the practice, learning how to make joss sticks, or sacrificial incense, during his childhood from his grandmother and mother. But he and Chen both needed to learn the art of hexiang (合香 in Chinese), or fragrant incense.

“The basic skills required to make both sacrificial incense and hexiang are the same,” Keng explains. “But there’s a difference when learning hexiang because you get a deeper understanding of herbs and flowers.”

Located in Edificio Va Un, Rua das Estalagens, Chen says that they chose the new address for two reasons. Firstly, because of a Taiwanese custom of favouring businesses with a certain orientation that is thought to be good for business. “We liked that it had an L-shaped area where people can see and enter the shop from two sides. That was a big part of the decision.”

Secondly, Chen says she fell in love with the historical neighbourhood. “This street is really old, and still sells handmade things like shoes, tools, and fabric. Since we are reviving an old brand and want to bring back that same spirit of tradition, we thought it was a perfect spot.”

The couple started with a pop-up shop that ran for 12 days near the future store site, selling joss paper and incense sticks and building a buzz among locals about the re-opening. Once they moved in, the two got to work making it their own; they rebranded as Veng Lei Laboratory, and repurposed materials from the bird shop that occupied the space before them.

“There were hundreds of birdcages and a few bird cups [a tiny cup made of glass used by birds to drink water] left over,” says Chen. “We loved them and wanted to preserve the items, so we cleaned them all up and used them as lamps in our store.”

Keng and Chen hand make their own incense in house, sometimes ending their day at one in the morning. It’s hard work, but it allows them the freedom to customise the smell of their incense. “If customers prefer a floral smell, for example, then we can add in rose. It’s adding something special to it, and making it more memorable,” explains Chen.

Veng Lei also has a collection of four signature incense: traditional, floral and fruity, sage tea and something called “algorithm”, a mixture of traditional scents and any other fragrance notes someone might want to add, such as grass or fruit.

Chen says their inspiration for scents have come from movies, novels or experiences, and they view their creations as a modern departure from classic Chinese incense aromas, like agarwood and sandalwood, though they still sell these at the store.

The two brainstorm new ideas every day, in a bid to make products that integrate into modern times more easily; for example, crafting incense made specially for sleep or mindfulness. Their product line is often a collaborative effort between them, according to Chen.

“Sometimes, he’ll come up with a concept, and I think of how we can make it happen. It’s like when we used to make films together [as students]; he’d write the script, and I’d set the scene.”

They also offer workshops for all age groups, teaching students how to make their own incense by making dough from a blend of fragrance powders and water, and shaping them into their final form. “The whole process takes about two hours, but the customers seem to enjoy it,” laughs Chen.

And that seems to reflect the overall ethos of Veng Lei Laboratory. Nothing is rushed; everything is done with care, love, and in tribute to the past. It’s a place that reminds its customers to stop and smell the roses – or in its case, the rose-scented incense.

Keng Si Wong: “I prefer traditional incense, like agarwood and sandalwood, because it’s simple and natural, just like the texture of wood.”

Kim Chen: “I like Basil & Ship’s Horn, a scent we created. The story behind it comes from a visit we made to the Guia lighthouse one day. I could smell basil from the neighbour’s cooking in the building nearby. And even though you can’t see the sea from the lighthouse, I could hear the ships’ horns from afar. Both of those ideas stuck with me and I combined them into one smell.”

To check out Veng Lei Laboratory, you can visit the store at Edificio Va Un, R. das Estalagens, Macao or follow them on Instagram or Facebook.