All 108 passengers in quarantine after returning to Macao tested negative for Covid-19 in their second nucleic acid test. 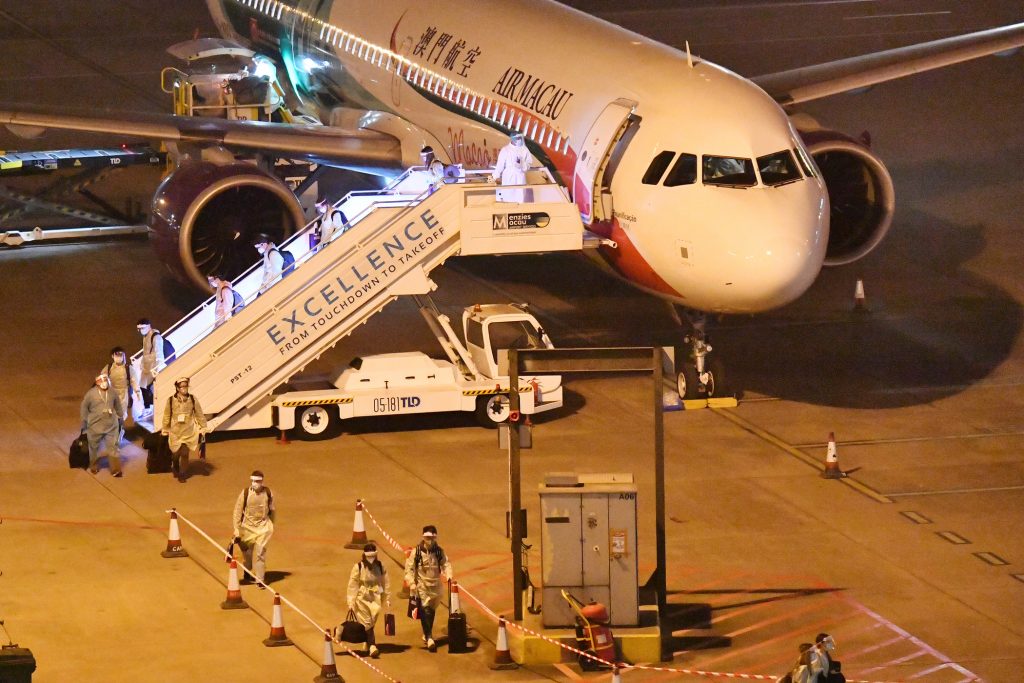 The government’s Novel Coronavirus Response and Coordination Centre announced in a statement Tuesday night that all 108 passengers in quarantine after returning to Macao on two flights from Tokyo last week tested negative for Covid-19 in their second nucleic acid test (NAT) on Tuesday.

The two flights’ 16 crew members, who are also in quarantine, also tested negative for the virus for the second time, on Tuesday.

A total of 109 Macao residents who departed from 14 countries returned to Macao via the two Air Macau flights from Tokyo on Thursday night, one of whom was confirmed as Macao’s 47th Covid-19 patient the next day. The patient is a 43-year-old woman who had departed from Dubai to Tokyo via Singapore last Tuesday.

Eight passengers who were sitting near the woman on the plane – therefore classified as having been in close contact with the woman – were taken to the Health Bureau’s (SSM) Public Health Clinical Centre in Coloane for 21 days of quarantine and medical observation, while the other 100 passengers and 16 crew members on the two flights were taken to Grand Coloane Resort near Hac Sa Beach for 21 days of quarantine and medical observation.

Last night’s statement said that all 124 people in quarantine on the two flights tested negative in their second nucleic acid test on Tuesday, comprising eight passengers undergoing medical observation at the Public Health Clinical Centre in Coloane after being classified as having been in close contact with Macao‘s 47th Covid-19 patient, and 100 passengers and 16 crew members undergoing medical observation at Grand Coloane Resort.

Passengers and crew members will undergo two other tests during the quarantine period, on the 12th and 20th days.

According to the Health Bureau’s announcement last week, the 47th Covid-19 patient took care of her family members in the United Kingdom between November 22 and December 23, before travelling to Dubai alone on Christmas Eve “for a vacation” where she had been primarily staying in a hotel due to the Covid-19 pandemic and rarely left the hotel. She tested negative for Covid-19 at a hospital in Dubai last Tuesday before flying to Singapore.

Macao has not recorded a new Covid-19 case for four days, while no local case has been confirmed in 303 days.

The first 46 patients have all recovered and been discharged from hospital, and no fatalities have been reported in Macao. The 47th Covid-19 patient, who is asymptomatic, is undergoing treatment in the isolation ward of the public hospital.

The Health Bureau said on Monday that the 47th Covid-19 patient remained in a stable condition without fever and any other respiratory symptoms. A CT scan showed that she did not suffer from pneumonia.