Health Bureau (SSM) Director Lei Chin Ion said that the government will launch the fifth round of its facemask purchase scheme on Tuesday. 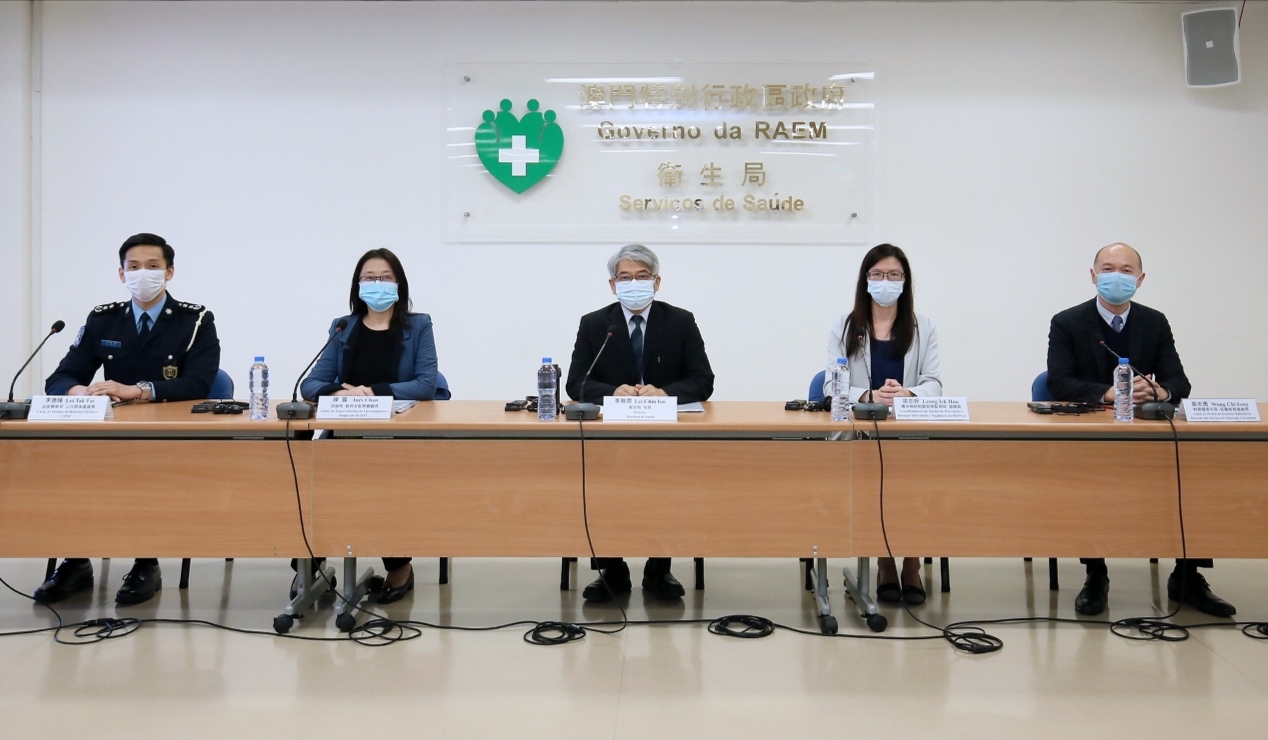 Addressing Monday’s daily press conference about Macau’s novel coronavirus (COVID-19) situation, Health Bureau (SSM) Director Lei Chin Ion said that the government will launch the fifth round of its facemask purchase scheme – at the fixed price of eight patacas for 10 facemasks for local residents and non-resident workers – on Tuesday, but with the number of designated outlets decreasing from 87 to 84.

As in the two previous rounds, the fifth round also includes facemasks tailor-made for children.

Under the scheme, which was first launched by the government on January 23, each local resident and non-resident worker is entitled to buy 10 facemasks at the fixed price of eight patacas every 10 days at designated outlets upon presentation of their Macau ID card or work permit (informally known as “blue cards”).

The sale of child facemasks was first available in the third round – which ran from February 12-21 – of the government’s facemask purchase scheme.

In the fifth round starting Tuesday, the arrangement for the sale of children’s facemasks is the same as in the third and fourth rounds. Parents or legal guardians can only buy five child facemasks with the child’s ID card, with the remaining five for adult facemasks, or alternatively they can choose to use the whole quota of 10 for adult facemasks. The facemasks for children are only for kids aged between three and eight.

Lei made the remarks Monday evening at the bureau adjacent to the public Conde de São Januário Hospital Centre.

According to Lei, three outlets run by the Macau Federation of Trade Unions (Gung Luen) have been cancelled for the current round of the government’s facemask purchase scheme.

After the cancellation of the three outlets, there are now 84 outlets for the fifth round. The 84 outlets comprise 56 designated pharmacies, eight health centres in Macau and Taipa, and two health stations in Coloane run by the bureau, as well as 18 so-called service points run by the Macau Federation of Trade Unions, Macau General Union of Neighbourhood Associations (Kai Fong) and Macau Women’s General Association (Fu Luen), according to a statement by the bureau on Monday.

Child facemasks are only sold at the bureau’s health centres and health stations. The price of child facemasks is the same as for adult facemasks.

Lei stressed that the supply of facemasks under the government’s facemask purchase scheme is sufficient, urging residents not to rush to buy their facemasks during the first two days of the fifth round.

Lei also said that 22 million facemasks were sold during the first four rounds of the government’s purchase scheme.

Lei said that no residents have complained about the sale of the facemasks with ties which began to go on sale in the third round of the scheme.

Lei also said that only a small number of the facemasks to be sold in the fifth round are facemasks with ties. Most on sale are ear-loop facemasks.

During Monday’s press conference, Lei elaborated on the rationale of the local government’s decision to airlift Macau residents stranded in Hubei province. Lei acknowledged that the matter has resulted in “heated discussions” in civil society in recent days. Lei said that he thanked residents for paying attention to the issue. “Some residents have also shown care for me. My cough [symptoms] have actually improved a lot, yet sometimes it’s good and sometimes bad. But it’s definitely not pneumonia, please be reassured,” Lei said.

During the daily press conference on Sunday, Lei admitted that the local government’s airlift this Saturday to bring Macau residents stranded in Hubei province back to the city would entail a “very high” risk for Macau’s COVID-19 epidemic situation and that the risk would have to be borne by the “whole community”. Lei said on Sunday that the local government had been under “very” big pressure over the previous days to bring Macau residents back from Hubei, such as by the strong demands of those stranded in the province and by some local reporters, adding that the pressure was also due to the fact that other countries and regions such as the United States and Hong Kong have airlifted or will airlift their residents out of Hubei.

Lei said on Sunday that the local government planned for the charter plane – an Air Macau jet – to depart for Wuhan this Saturday to bring back Macau residents who are in or near Wuhan.

During Monday’s press conference, Lei said that residents have expressed starkly different views about the word “pressure” that he mentioned on Sunday so that he needed to clarify the matter during Monday’s press conference. Lei reaffirmed that “the most important” pressure concerned the local government’s responsibility to look after local residents and the difficulty in carrying out the airlift.

“I think responsibility and difficulty do not contradict each other. As long as the government has prepared for the worst possible scenario [resulting from the airlift] and formulated the most rigorous plan possible, the possible risk can be minimised,” Lei said.

Firstly, Lei noted that the epidemic in Macau has become stable as the city has not confirmed a new COVID-19 case for 27 days, almost equivalent to two incubation periods of 28 days in total. Secondly, Lei pointed out that the epidemic in Wuhan has started to stabilise as new cases confirmed there daily has significantly dropped, adding that therefore the Wuhan government’s anti-epidemic measures have now become less strict, in which case it is now able to assist the Macau government in its task of bringing the Macau residents home.

Due to the epidemic in Wuhan stabilising, the risk of the Macau residents being infected with the novel coronavirus while travelling to the airport there to catch the plane back home would be reduced, Lei said.

The central government imposed a lockdown of Wuhan on January 23, in an effort to quarantine the epicentre of a COVID-19 outbreak, while other cities in the province followed later.

Hubei, which is about twice the size of Portugal, lies nearly 1,000 kilometres north of Macau. The province has around 60 million inhabitants.