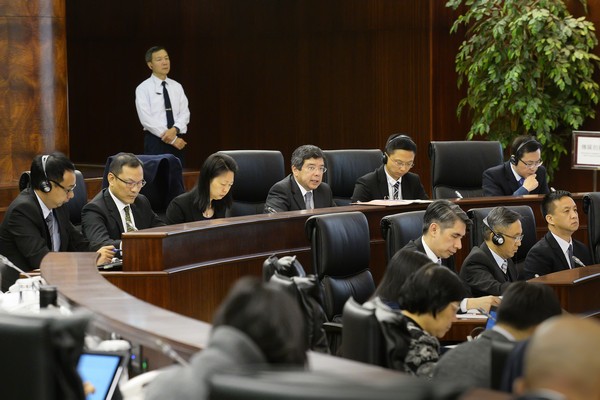 Secretary for Transport and Public Works Raimundo do Rosario said he expected the Taipa section of the city’s Light Rapid Transit System (LRT) to finally start operating in 2019, adding that the government should be able to launch a public tender for the construction of the LRT station in Barra next year.

Previously, the Taipa section was slated to start operating next year. Site investigation work started in 2008 and main construction work began in 2012. Engineers have pointed out that the LRT is actually a light metro using people movers.

The Barra station near Ma Kok Temple would be the first LRT project in the peninsula to start construction.

The policy secretary also said he expected a new public tender for LRT depot construction in Cotai to be held in the second quarter of next year. Construction of the depot has been hit by a string of problems that have delayed its completion.

Rosario made the remarks during a Q&A session in the legislature about his portfolio’s policy guidelines for next year. He was accompanied by several senior officials including Lands, Public Works and Transport Bureau (DSSOPT) Director Li Canfeng and Transportation Infrastructure Office (GIT) Director Ho Cheong Kei.

Lawmakers raised a host of hot-button issues such as public housing, the LRT project, idle land, and traffic.

Responding to lawmaker Zheng Anting’s questions about the long-delayed LRT project, Rosario said that construction of the 11 stations on 9.3 kilometres of track in Taipa and Cotai would be completed next year.

The government said earlier this year it was still working on a settlement with the contractors of the troubled LRT depot. The contractors and government officials have blamed each other for the fiasco, which reportedly involves a string of technical and legal issues.

Regarding the LRT depot, Rosario said he believed that in the second quarter of next year the government would be able to put the stalled depot project out to tender so that construction could restart.

He pointed out that the depot is a key factor for the operational start of the LRT section in Taipa.

Rosario also said that next year the government should finally be able to put out a public tender for the construction of the LRT station in Barra, the line of which will connect the Taipa section and the LRT section in the peninsula.

However, he was quick to add that the construction of the LRT station in Barra was a complex undertaking as it would be part of a major transport hub.

The first phase of the government-funded LRT project includes 21 stations – 11 in Taipa and Cotai, and 10 in the Macau peninsula.

The government said earlier this year that the final price tag of the LRT project was not yet known.