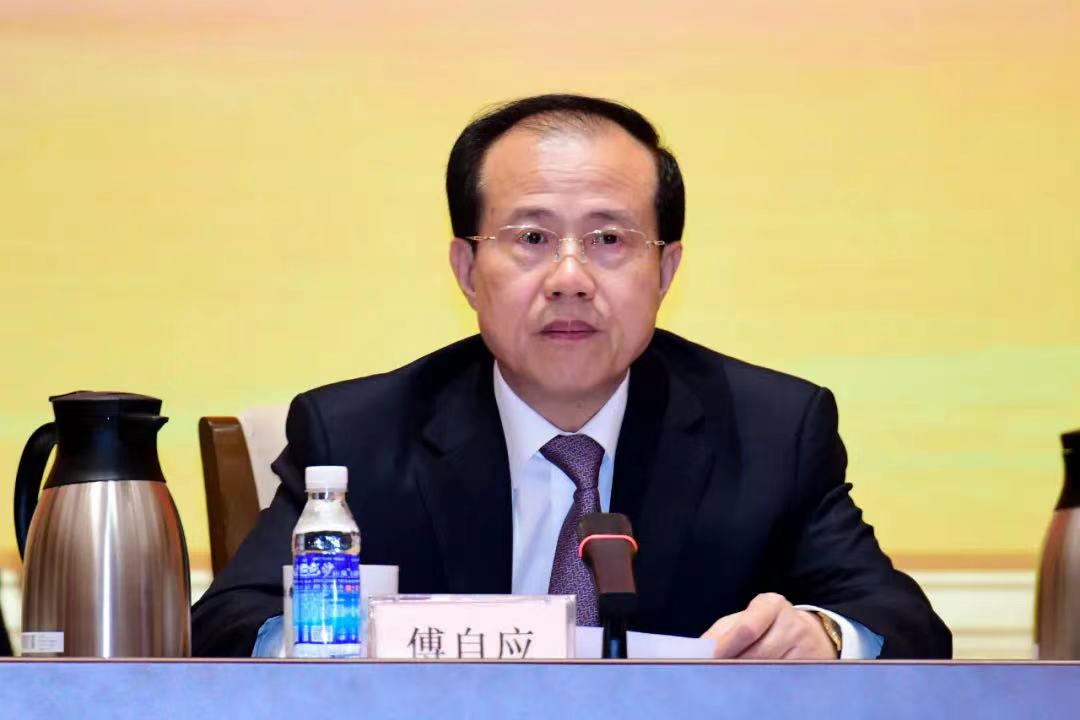 Macao must not let its guard down in its Covid-19 prevention and control work, and must safeguard the nation’s sovereignty, security and development interests, Central People’s Government Liaison Office in Macao Director Fu Ziying said yesterday.

Fu made the remarks during a meeting hosted by the Central People’s Government Liaison Office at its headquarters in ZAPE about this year’s “Two Sessions” – the annual sessions of the National People’s Congress (NPC) and the National Committee of the Chinese People’s Political Consultative Conference (CPPCC) in Beijing.

NPC deputies and CPPCC National Committee members from Macao as well as other community leaders and local and mainland officials attended yesterday’s meeting.

In his speech, Fu made three key points for Macao. Firstly, Macao’s civil society should deeply understand the historic achievements in the development of the nation and Macao.

Secondly, Fu urged Macao to seize the major and important opportunities created by the nation’s development.

Thirdly, Fu urged Macao’s civil society to support the chief executive and his government to administer the city.

Fu also said that the Covid-19 pandemic is a clear reminder of the various problems existing in Macao’s economic structure, urging civil society to support the local government’s work in pushing ahead with enacting the various amendments to Macao’s gaming industry law. The liaison chief also called for Hengqin to become a new platform for promoting the diversification of Macao’s economy with the development of the Guangdong-Macao In-depth Cooperation Zone in Hengqin.

Fu also said that Macao’s development is closely interrelated with the national development, adding that a stable development in the nation’s economy will create favourable conditions for Macao’s socioeconomic development.

The chief executive also pledged that the local government will adhere to its constitutional duty to safeguard the nation’s sovereignty, security and development interests.

Thirdly, the local government will continue with its work to promote the development of the Guangdong-Macao In-depth Cooperation Zone in Hengqin and to further Macao’s integration into the nation’s overall development, the chief executive said.

In addition, he said, the government will strengthen its work on youth affairs, according to which the local government will need to ensure that the implementation of the One Country, Two Systems principle will have qualified successors and “proceed steadily and go far”.

Consequently, the chief executive said, the local government will cultivate the younger generation with a sense of belonging to the nation and developing international horizons.

The central government’s latest work report was delivered by Premier Li Keqiang during the opening session of the National People’s Congress in Beijing early this month.

In his speech, Edmund Ho acknowledged that Macao’s development is still facing difficulties and challenges resulting from the adverse impacts on its economy from the Covid-19 pandemic that, he said, seemed “endless”.

Despite Macao’s optimistic economic prospects, Edmund Ho acknowledged, the ongoing economic downward pressure resulting from the local government’s strict Covid-19 prevention measures is causing hardship to local businesses and residents’ employment, because of which, he said, Macao is currently susceptible to various social conflicts and issues.

Edmund Ho called for Macao’s civil society to remain confident in Macao’s development prospects, based on the fact that Macao always can rely on the “great” motherland’s backing.

Edmund Ho said he believed that three things, namely the central government’s strong leadership and its support for Macao, the “strong vitality” of the One Country, Two Systems principle with Macao characteristics and its institutional advantages, and the local government’s timely measures to tackle residents’ financial hardship and boost the economy, will enable Macao people to get through and overcome the ongoing Covid-19-induced hardship, The Macau Post Daily reported.