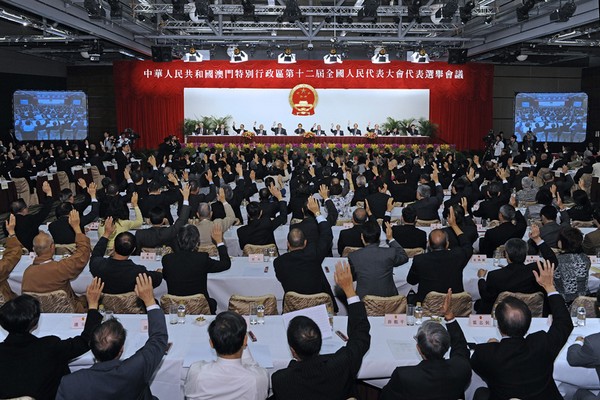 A total 359 of the 364 members of the Electoral Committee to elect the local deputies to the National People’s Congress (NPC) Monday cast their votes for Macau’s 12 NPC deputies.

Nine of the ballots were invalid. There were 15 candidates.

According to The Macau Post Daily, the voting started with a total of 359 attending, lead by Legislative Assembly’s former president Susana Chou, placing their ballot papers into three boxes placed at Macau Tower.

After 30 minutes, Chief Executive Fernando Chui Sai On, who was elected standing president of the 11-member presidium of the Electoral Conference, announced the results of the election.

According to Chui, 359 members cast their votes, 350 were valid and nine invalid.

Chui also announced how many votes each NPC deputies obtained.

Ho Iat Seng, vice-president of the local legislature who is the only local member of the NPC Standing Committee, won 321 votes.

An NPC term lasts for five years. The 12th NPC will start work next March. It will elect the nation’s new president and prime minister.

After the election, the 11- member presidium had a closed door meeting.(macaunews)