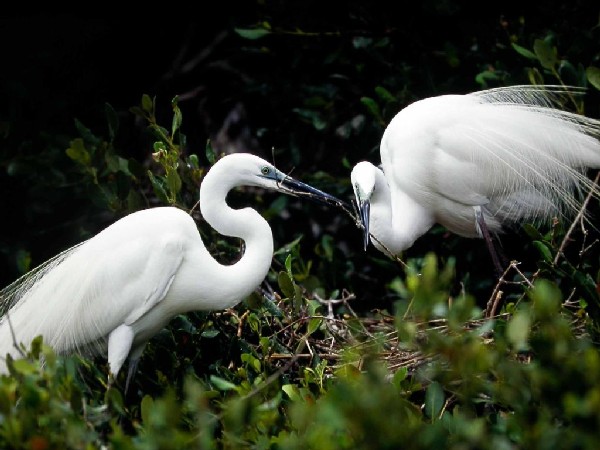 Three Macau environmental protection groups and a group of residents Sunday urged the government to find another location for its safety traffic information centre to protect the egrets’ habitat in the wetland next to the Taipa Houses-Museum.

The Macau government  has announced that it plans to move the centre to a plot of land that was formed after being illegally reclaimed from the wetland – which was one of Macau’s just seven rare plots of wetland and a stopover for migrating egrets and other birds.

Representatives from the three groups – the Macau Green Students Union, Macau Aves Society and Macau Eco-Friends Group – held a joint press conference in a youth centre – Group Point – run by the Macau General Neighbourhood Unions Association (commonly known as Kai Fong), to announce a string of activities related to the issue – Save the Egrets on World Environment Day.

Joe Chan Chon Meng, who chairs the Macau Green Students Union, said in the press conference that the government should choose another location for the centre.

Chan added, “Indeed, the city’s natural environment has been damaged in the past few year as the city develops. We have seen that some residential buildings were built on Grand Taipa Hill… as well as some old trees damaged. We have to think about what we should reserve for future generations – if it’s only casinos our children will only have the casinos’ recreation areas to play in.”

“We sincerely urge the government to listen to our voice…if the egrets’ habitat near the Taipa-Houses Museum is not protected the birds will leave, which could be our loss.”

Chan also slammed the government for its “useless” plan to set up a “green buffer zone” between the centre and the birds’ habitat to ensure that the birds will not be affected after the centre opens.

Macau Aves Society’s representative Choi Kwai Lam said the planned relocation project would impact the egrets “a lot” and the planned buffer zone would not protect our feathered friends.

The Macau Aves Society told the media in April that about 500 egrets visit the lake during migratory periods and about 40 other kinds of birds also choose the lake as a stopover.

The groups expect to collect 2,000 residents’ signatures which they plan to submit to the government on June 5. So far over 1,200 signatures have been collected.

Due to the fact that the local People’s Liberation Army (PLA) garrison needs more space for the expansion of its barracks, some public facilities, including the centre, which is currently situated next to the PLA barracks in Taipa, need to be relocated.

According to The Macau Post Daily in the government’s plan released in March, the centre will be moved to a plot of land next to the Taipa Houses-Museum, which will contain a one-storey building within a 500 square metre area for the centre. There will also be an additional 4,000 square metres for other facilities.

Even though several groups and a number of civic leaders have expressed their concern about the birds’ habitat, the government has insisted the project would not impact the birds.(macaune