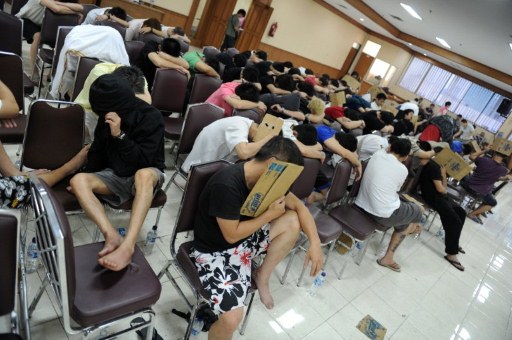 Another 100 suspects are slated to be flown back to Taiwan from Indonesia today in the operation’s second round of repatriations following a massive cross-border crime crackdown, Taiwan ’s Criminal Investigation Bureau (CIB) said Sunday.

The repatriations were part of a recent cross-border crackdown on phone scams jointly launched by law enforcement agencies in Taiwan , mainland China and several South-east Asian countries, CIB officials were quoted as saying.

A total of 598 suspects were nabbed in the crackdown, including 410 Taiwanese, in Taiwan , the mainland, Cambodia , Indonesia , Malaysia and Thailand on Thursday.

The 122 Taiwanese that were repatriated via Macau airport on Saturday had been arrested in Cambodia and then flown to Macau, where Taiwan officers picked them up and flew them back on an EVA Airways chartered flight, the CIB officials said.

The 122 suspects had arrived in Macau from Cambodia , along with 181 mainland suspects, aboard a plane chartered by Beijing , the Taiwan media reports said.

The Criminal Investigation Bureau sent 60 officers to escort the 122 suspects back to Taiwan from Macau , according to the CNA report.

After the suspects arrived at Taiwan Taoyuan International Airport on Saturday morning, another 40 police officers were dispatched to escort them to the central Taiwanese city of Taichung for questioning.

In the cross-border operation, codenamed “0310” and launched on March 10, Taiwanese and mainland Chinese suspects who used bogus call centres to con their compatriots were tracked down and arrested.

According to the CNA report, the Taiwan authorities mobilised more than 800 police officers to join the cross-border crackdown on the racket.

Taiwanese account for the majority of the suspects, while 188 are from the mainland, three from Thailand , two from South Korea and one each from Vietnam and Cambodia , according to the CIB officials.

The joint operation marked the first time that law enforcement officers from the Taiwan and the mainland simultaneously collaborated with their counterparts in several South-east Asian countries in a cross-border crime-fighting operation.(MacauNews/Politics)