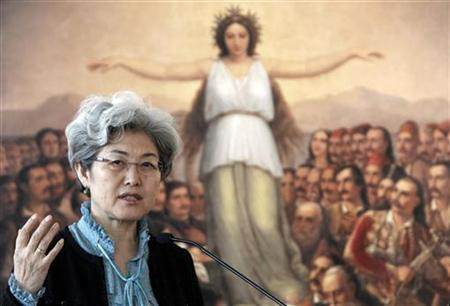 Fu made the hint during a meeting with about 50 local community leaders in the Office of the Commissioner of the Ministry Affairs in Macau to hear their opinions and suggestions about the nation’s foreign affairs.

In response to a comment made by government-appointed lawmaker Lam Heong Sang – a vice-president of the Macau Federation of Workers Unions (FAOM) – about US Consul General Stephen M. Young expressing his “deep concern” about affairs in Hong Kong and Macau, Fu said that the all consulates and their staff and other foreign entities in Hong Kong and Macau should follow international treaties on how they should conduct themselves during overseas postings.

In March, when being asked by local reporters to comment on the Macau government’s imported labour policy, Ambassador Young said that US investors would like to have more flexibility in hiring the right people by being allowed to import workers.

Fu said that there existed many consulates in Hong Kong and Macau , as well the other foreign organisations, and their staff in both cities.

International treaties clearly stated the rights and obligations of all consulates and their staff, as well the other foreign entities, Fu said.

According to the treaties, the main duties of the foreign consulates and their staff are to promote economic and trade relations with their host and home countries; as well exchanges between the citizens of both countries, she said, adding that the consular staff should actively develop these relations by carrying out their duties to the full.

Fu also expressed the view that Macau should further develop its role as a bridge for co-operation between the West and the East.

Fu was born in Inner Mongolia in 1953. During 2006-2009 she was ambassador to Britain , after which she was promoted to vice-foreign minister.(MacauNews/Politics)