Wong has now been teaching at the University of Macau for 20 years, during which he has studied in his spare time and obtained a doctorate in industrial and systems engineering in the Hong Kong Polytechnic University. 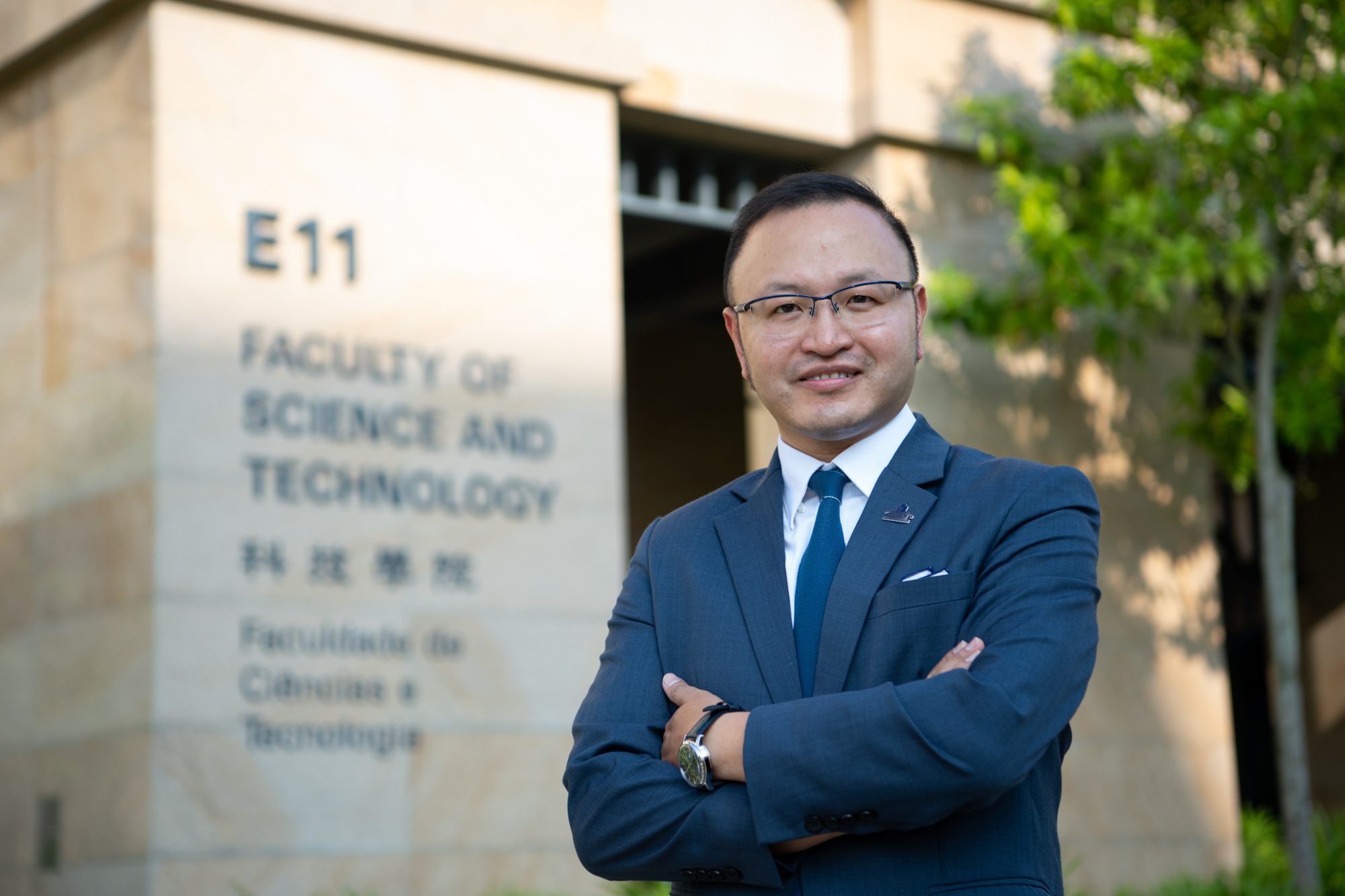 A chance encounter with teaching

Stepping into Seng Fat Wong’s office at the Faculty of Science and Technology at University of Macau feels like you have stepped into another world – on one side of the room, his paintings of lotus flowers calligraphy hang on the wall, on another sits a tea ceremony table with a miniature turtle on top of a teacup.

Yet above his office printer and boxes of business cards, there are dozens of miniature Spidermans and on the opposite side of the room sit dozens more miniature superhero figures ranging from Iron Man to X-Men. Wong jokingly says, “Don’t worry about knocking them over, it will give me a reason to buy more!”

Born on 22 May 1973 in Macao to parents who worked in the knitting industry, Seng Fat Wong has loved artistic creation since he was a child. He spent his summers working with different techniques from watercolour to pencil to calligraphy – setting himself goals to create beautiful work by the end of summer. As much as he loved art, Wong knew it was difficult to make a living as an artist. So, he set himself a different path, skilfully integrating artistic creation into his study, work and life.

After graduating from Yuet Wah College in 1991, Wong went to National Cheng Kung University in Taiwan to study mechanical engineering, hoping to design some original mechanical products – particularly within human factors engineering – in the future. After completing his studies there, he obtained a scholarship and pursued a master’s degree at Hong Kong University of Science and Technology in industrial engineering and engineering management. Upon graduation in 1997, he found himself without a job.

With his then-girlfriend (now wife) based in the sister SAR of Macao, he decided to return to the city to be with her and to try to find work there. Wong sent out more than 40 cover letters, most of which received no response. Only one company replied, saying: “You are so highly-educated that we can’t afford to employ you.” (At that time, there were few masters in Macao.)

In the face of this poor economy, he turned to the Labour Affairs Bureau for help. The bureau happened to need a part-time teacher to teach the Cangjie input method (entering Chinese characters with a standard keyboard) at that time. This chance opportunity would prove an important turning point in his career.

“The beeper was popular then, so they needed a lot of telephonists [switchboard operators]. There were various types of students enrolled in the Cangjie input method course: the unemployed middle-aged, young people who failed in schools and people who lacked skills. It was far from easy to teach them and it took a lot of patience. Some students had never even used a computer. I had to help them finish the course and meet the standards for being a telephonist for beepers.”

Unexpectedly, this part-time job ignited his now decades-long passion for teaching. Even though the University of Macau did not have any teaching positions available at the time, Wong applied nevertheless and convinced them that he would be able to contribute to the university. He managed to get a part-time job teaching production management and in September 1998, he landed his first full-time job as a lecturer at the University of Macau.

Wong has now been teaching at the university for 20 years, during which he has studied in his spare time and obtained a doctorate in industrial and systems engineering in the Hong Kong Polytechnic University.

Wong believes that teachers should not only teach students to learn but also comprehend their ideas in turn. Therefore, he often chats with students during class breaks. He draws on his own experience to encourage students to participate in social practices related to their majors and establish work contacts, guide them in planning their life, and persuade them to give back to the society when they get better-off.

In fact, Wong credits his own teachers in Taiwan with nurturing his passion for engineering back when he was at university. Uncertain of what to study and skilled at drawings, his professors recommended engineering and he hasn’t looked back since.

Wong is not the chatty type of teacher. He usually puts words into practice. In addition to holding important positions in various engineering associations, he is also Vice President of Macao SAR Government Traffic Services Committee, and often makes suggestions to the government. This leads the media and others to sometimes mistake him for a government spokesperson, rather than a concerned citizen simply offering advice in his areas of expertise.

“City planning, city renewal, transportation and flooding are interlinked,” he explains. “Macao first needs an overall city-planning blueprint to carry out city renewal work in an orderly manner. Macao has a limited area of land, so it must be treated like Tetris.”

The iconic video game certainly captures the importance of maximising usage of space and the interconnected nature of various city elements, but Wong’s approach to urban renewal also resembles a game of musical chairs – with a purpose:

Meanwhile, Wong says, the issue of updating the outdated rotary traffic mode can also be addressed. “[It can] be changed into a three-dimensional traffic mode and the underground drainage should be re-arranged. Finally, the problems of traffic congestion and flooding in the Inner Harbour will be effectively solved.”

Efforts like these, along with more technological elements of the smart city approach, aim to optimise the life of the citizens. Wong has served as executive director of the Smart City Alliance Association of Macao for the last two years, advocating for ideas including improvements in transport via big data and developing a new smart city legal framework for Macao.

In the process of teaching, Wong has collaborated with his student research team to develop various products, including the design of an award-winning smart wheelchair.

In this way, he argues, designs can be turned into products and economic diversification can be promoted, thus bringing more convenience and comfort to citizens. He hopes that the government may learn from Israel, Singapore and Hong Kong to industrialise Macao’s innovative technology.

Outside of his academic and social work, Wong nurtures a deep love of tea ceremony and traditional Chinese painting. Around 2006, a few years after when his daughter had been born, Wong was experiencing intense stress in both his personal and work life. When his wife brought him with her to a tea workshop one day, he was hooked.

“Every time the tea is brewed, it’s necessary to sweep or pour a layer of tea on the outside of the teapot so that the tea inside and outside will exchange, and the teapot will get brighter. The machine that only sprays tea on the surface of the teapot is no match for our hands, because the machine is in a hurry to finish, while we take time to beautify the teapot,” he explains. “This is just like being a man. We must cultivate ourselves internally and externally. It’s incomplete to be attractive but lack depth.”

While his wife discontinued attending the tea classes, Wong dove deeper into his new hobby, becoming the Vice President of the Chinese Teaism Association of Macao. He sees it as a form of meditation, where he can calm the mind. During busy work periods, he still tries to make tea for his wife and two teenage daughters at home.

Painting, another passion of Wong’s, returned to him as an adult courtesy of his ‘tea buddies’, as he calls them – he has since become Deputy Council President of the Association of Keng San Painting and Calligraphy of Macao. In a corner of his office is placed an elegant tea table with exquisite tea sets.

A scroll of calligraphy on the wall, which reads “Flavour’s outside the tea,” is derived from his remarks. The piece was a gift from Wong’s tea ceremony teacher, Lo Heng Kong.

Promoting the profound Chinese culture is an important item in Wong’s to-do list. “In fact, the most popular lecture I give at universities is about the tea ceremony. Generally, students don’t understand the knowledge of tea until they come into contact with the tea ceremony. This knowledge includes the water temperature, time, and proportion of tea and gestures. Actually, we can also combine the tea ceremony with artistic elements like music and camellia to make it more vivid and fashionable. This will instantly change their stereotype about the tea ceremony.”

Wong is busy with teaching and research work as well as arduous social affairs, but he still tries hard to promote Chinese culture. He hopes to learn more about Chinese cultures in the future and promote them in universities and communities.