Sales Marques is the director of paediatrics and neonatology at Conde de São Januário Hospital Centre. 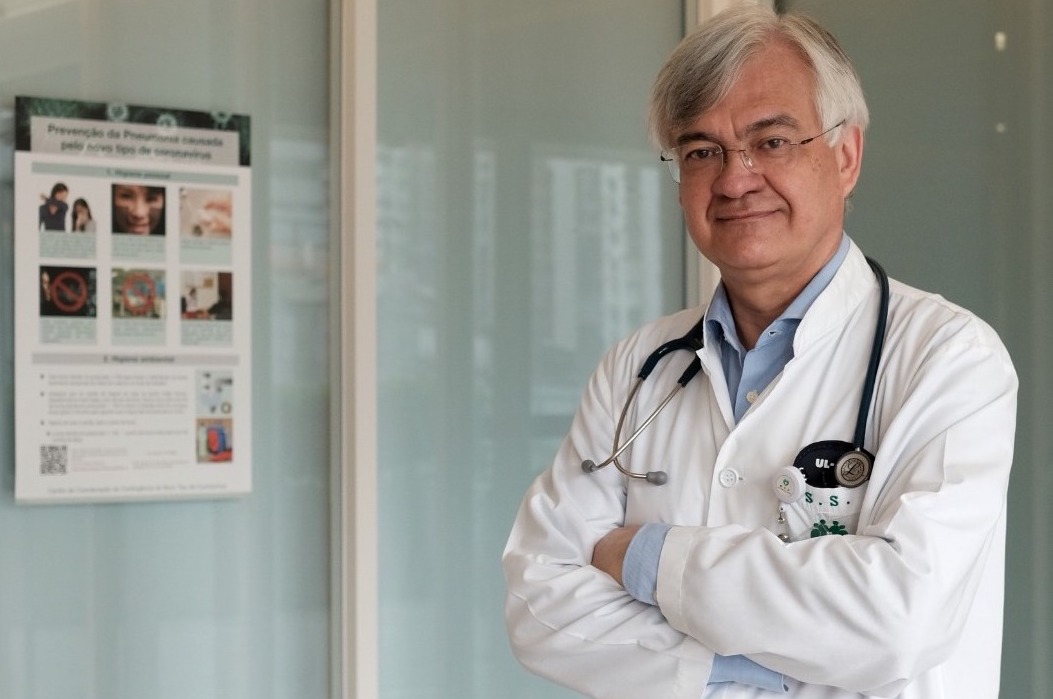 “If I wasn’t a doctor, I couldn’t be anything else,” says Jorge Sales Marques, whose enthusiasm hasn’t faded after nearly four decades in his chosen profession. Now 60 years old, he knew by age 14 that medicine was his calling and chose paediatrics because of his love for children. He soon discovered that working with such young patients also made for a more challenging diagnostic process, as many children aren’t able to express themselves as well as adults.

“What most appeals to me in medicine is diagnosis. I was lucky to have to deal with rare cases, and I’m happy because I was able to help improve the lives of many patients,” he explains.

He recalls one of these rare cases was a child with autism who exhibited strange symptoms but he managed to discover that the boy suffered from creatine deficiency, after five years of unsuccessful diagnoses. “It was the first case in Portugal. I then discovered that his sister also had the disease and that the mother had been a carrier. There was no treatment for boys at the time, only for girls, but I was able to discover treatment at an international level that allowed an improvement from a clinical point of view in relation to symptoms,” he explains.

While most of his career as a paediatrician has been spent in Portugal – where he’s known as the ‘doctor of strange diseases’ – Sales Marques now practices in Macao. He became director of paediatrics and neonatology at Conde de São Januário Hospital Centre in 2015, and currently serves as a member of the main board and appeal committee of the new Macao Medical Academy, as well as president of its Paediatric College.

Born 16 July 1959 in Macao, Sales Marques completed his primary school at the Pedro Nolasco da Silva School followed by secondary school at the Infante Dom Henrique Secondary School between 1969 and 1976. He left Macao for the first time in 1976, and at only 17 years old, he became the youngest student that year at the University of Porto Medical School in Portugal. “I chose Porto because my older brother [José Luís de Sales Marques] was studying economics there. It wasn’t easy back then as I came from a small city. Macao wasn’t what it is today,” he recalls.

After finishing his studies in 1982, Sales Marques began his career at Gaia Hospital where he specialised in paediatrics. He then passed his final exams after the residency stage with high grades (19.3 out of 20) and was admitted to the Portuguese Medical Order in 1991.

From 1992 to 1995, he practiced at the Institute of Medical Genetics Jacinto de Magalhães in Porto, Portugal. During that time, he also trained for three months at Necker-Enfants Malades Hospital in Paris, overseen by one of the leading figures in the area of metabolic disorders, Jean-Marie Saudubray. Sales Marques had previously trained in the endocrinology and growth unit at the University Hospital of Santiago de Compostela in Spain with Professor Manuel Pombo, a world expert doctor in growth disorders.

In 1995, his work brought him back to Macao, where his brother was the president of the Leal Senado from 1993 to 2001. “But in 1999,” he explains, “despite having been asked to stay on as director, our family decided that it was better to go to Portugal.”

Sales Marques once again settled in Gaia, across the river from Porto. By 2007, he was head of service of the Hospital Centre of Vila Nova de Gaia and, a year later, was asked to head the paediatrics department.

Sales Marques – who speaks Portuguese, English, French, Spanish and Cantonese – continually sought to expand his knowledge, specialising in various additional areas, such as in paediatric endocrinology in 2012 and hereditary metabolic disorders in 2014. A year later, he and his wife returned to Macao, where he would work as the Chief of Service at Conde de São Januário Hospital Centre. After three short months, the hospital invited him to take on the post of the Head of Paediatrics.

“Lately, I have been intrigued by the fact that there were so few cases of COVID-19 in children and was able to find the reason,” he proudly states. The paediatrician, who is on the Macao medical team at the forefront of combating the COVID-19 outbreak and is the Health Bureau’s spokesperson, explains his theory that children are less affected by the new coronavirus because their immune systems are more agile in responding to the virus.

Younger people have stronger immune systems due to consistently being stimulated by both frequent infections and vaccines administered throughout childhood, up to 13 years old. In adults, although both viral infections and vaccinations are frequent, immune memory is just not the same.

He shared this theory in a short review published in an American academic journal in early April, just the latest example in his long career: of 151 academic papers published, 107 have been in international publications. He’s also authored five books, including one – “O Que os Pais Devem Saber de Pediatria” – featuring illustrations by his then 10-year-old daughter, and another – “O Bebé no 1° ano de Vida: Perguntas e Respostas” – co-authored with his son, Rui Sales Marques. Both are parenting guides, appropriately enough.

Rui also joined him on stage at the 10th International Congress of the Angolan Medical Association in 2015, a “unique moment” for Sales Marques, who has spoken at more than 230 conferences around the world.

Sales Marques has won 33 prizes, including the “Nutrição Infantil Manuel Suarez Perdigueiro” award in Spain in 1990, best monthly publication in paediatrics magazines in 2017 and 2018, and the third prize in the Asian Congress of Metabolic Diseases in New Delhi in 2018 – an award he is particularly proud of, as he was the first doctor from Macao to win this prize.

His dedication to medicine has not gone unnoticed in Macao: In 1999, Sales Marques drew praise from the Macao government for his work in paediatrics, and again in 2018, for his contributions to the area of health in general.

Even though medicine takes up most of his time, he is still able to devote time to his family and his hobbies. Paddling, table tennis, photography and walking are the main ones. “I try to do 10,000 steps a day, though sometimes I’m not able to. I always take a late afternoon walk at Praia Grande or Guia. When I arrived in Macao, my weight went up slightly, which is natural due to the great food here, so I decided I’d have to set an example by exercising. After all, I’m a paediatrician.”

In 2020, he returned to Porto, Portugal. In October 2022, he was appointed Clinical Director of the CUF Trindade Hospital in Porto.