Snap a Memory of Macao: 10 photo-worthy spots and how to capture them Link copied

Two Macao photographers shortlist a few photogenic corners of the city and share their shooting tips, so you can bring home a keepsake or two.

From quiet residential lanes to the bustling city centre, Portuguese architecture, Chinese temples and everyday street scenes, Macao has no shortage of picturesque backdrops for shutterflies looking for that perfect keepsake. To inspire a photographic journey through the SAR, we reached out to two Macao-based photographers – one up-and-coming talent and one industry veteran – to discover photo-worthy spots across the city.

Leonardo Kuok Hou Cheong – “Beans” on Instagram – is a talented high school student who exhibited 30 photos at Yuet Wah College’s ‘Art Exhibition of Student’ in June. The 15-year-old says exceptional photography is all about the takeaway: “No matter how high quality a photo is, it’s just a soulless exhibition if it does not have a message for the audience.”

We also turned to António Leong – known as Antonius Photoscript on Facebook and Instagram – who has a knack for capturing beautiful Macao scenes across the seasons. Leong has won multiple National Geographic International Photo Contests and recently presented his “Discovering Everyday Beauty” exhibit at the Macao Catholic Culture Association. “It’s all about patience. Sometimes, I just sit there and wait for something to happen,” says Leong. “And when it happens, I’ll capture it.”

Offering a visual journey through Macao’s Historic Centre, Cheong and Leong share five photogenic scenes and how you can recreate them. Hidden away behind St Dominic’s Church, in the centre of the Sé district just off Senado Square, is Rua de Nossa Senhora do Amparo. The street is one of Macao’s many dense, colourful residential corridors and also happens to be a great place to capture everyday life and architecture in Macao, says Cheong.

“Even though this street is just behind the tourist area, many travellers may never see how people in Macao actually live,” he says. “But if you venture here to wander and explore, you will access another side of Macao.”

To get this shot, Cheong arrived at around 10 am on a cloudy day, using a zoom lens to create a sense of density and compression. “I stood next to a building and shot on the horizontal visual line,” he says, adding that he shoots with a Canon M50 camera with a Canon EF-M18-150mm lens.

“The lens has a focal length that includes wide-angle, medium-focus and telephoto all at the same time. That means I don’t need to change my lens as often, which saves me time.” 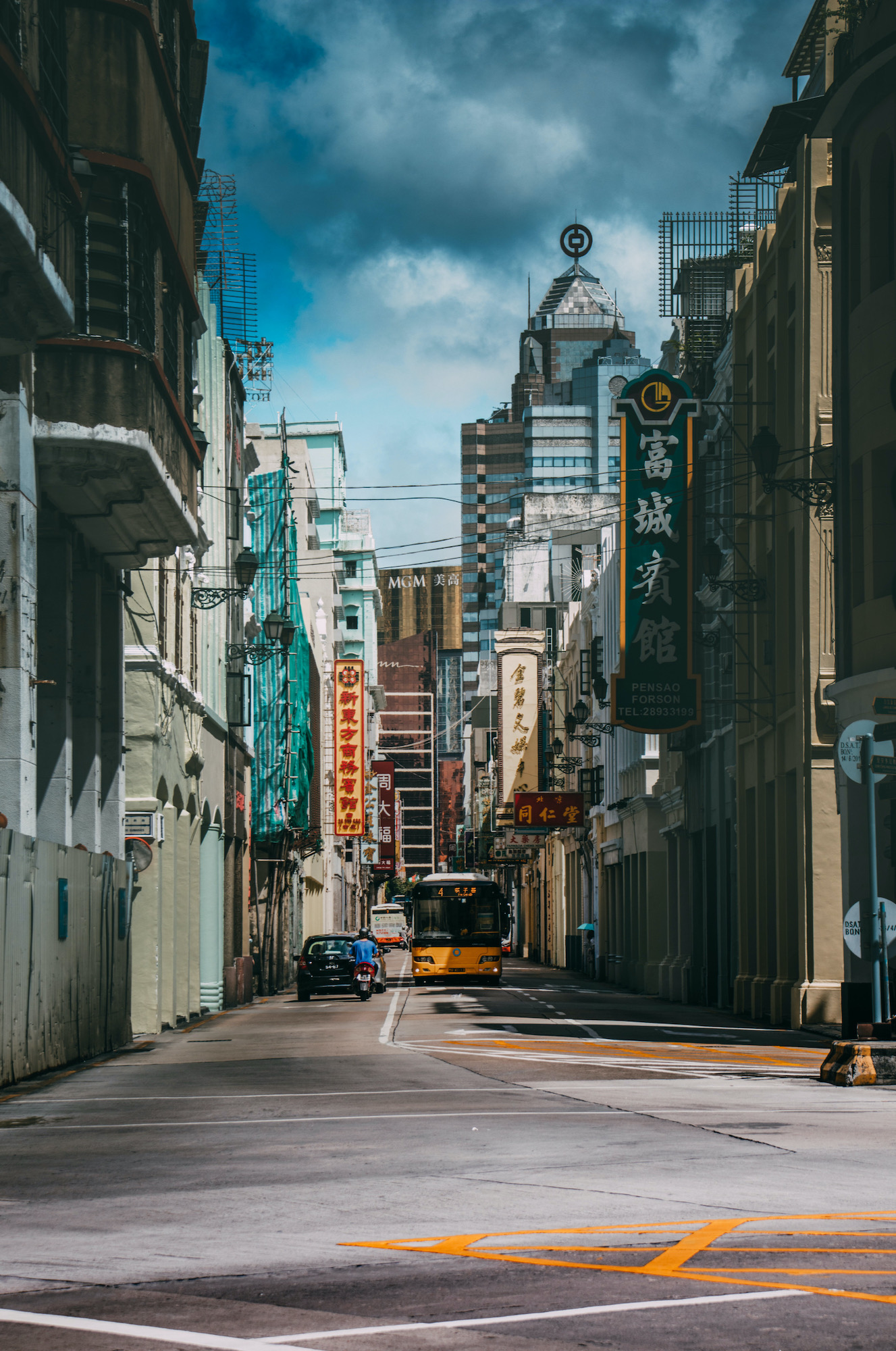 Sandwiched between the iconic Leal Senado Building and Senado Square, Avenida de Almeida Ribeiro is one of the city’s best known streets. “This street symbolises Macao and is quite accessible to all tourists coming to town,” says Cheong.

To capture this shot, Cheong stood on Rua do Visconde Paço de Arcos, the street perpendicular to Avenida de Almeida Ribeiro, then angled his camera to shoot vertically. He was careful to keep both sides of the road within the frame, so the photo features both old and new architecture.

“I took it around 2 pm when there wasn’t much traffic,” Cheong says. “I waited and waited, timing the moment when there were few vehicles. Finding that right instant is key.” St Joseph’s Seminary and Church, a buttery yellow Baroque-style building constructed in 1758, is a rare gem in Asia. “This angle provided the strongest perspective to capture its full beauty,” Cheong says.

Cheong set up at the bottom of the steps leading up to the church, then tilted his camera upwards to frame the church in the centre of the shot and create a majestic scene. “I took this around 3 pm, but would recommend going at sunrise or sunset for warmer, more saturated tones.” There’s nothing like a stroll along Rua da Praia do Bom Parto, near Nam Van Lake, to clear the mind and enjoy Macao’s calm, natural side. On a walk down the tree-lined street, Cheong found a serene moment to snap a shot: “Some light penetrated the trees and spilled onto the pathway, while leaving the rest in shadow, creating a nice contrast.”

For a similar effect, Cheong recommends shooting around 4 pm when a sliver of shade emerges below the trees. “Then for a more compact image, position yourself at the same level of the bushes,” he adds. Built in the mid-16th century by Jesuit missionaries, St Lawrence Church – also known as Feng Shun Tang (meaning, “Hall of the Soothing Winds”) – was once a commonplace for families of Portuguese sailors to pray for their safe return. As one of Macao’s oldest churches, the building showcases a beautiful Neoclassical facade with decorative, Baroque-style embellishments.

During a visit, Cheong noticed the trees swaying in the breeze and felt inspired to capture the contrast between nature and architecture. “I stood under the tree off to the left, below the front steps of the church, around 4 pm then shot up” he says. “Also, make sure to include some of the leaves from the tree on the top part of the frame.”

Whether exploring major landmarks or less-frequented alleys around the city centre, Leong always looks for new perspectives in his work. As Macao’s most famous landmark, the Ruins of St Paul’s has starred on countless postcards and souvenirs. The Baroque-Mannerist building dates to 1602-1640, when the Mater Dei church compound included the old St Paul’s College. Unfortunately, a fire in 1835, devastated the building, leaving only the façade and stairway behind.

“Millions of photos have been taken of this landmark, either by professional photographers, amateurs or tourists,” says Leong. “However, I always try to find a different visual story when revisiting this iconic place.”

For a more interesting shot of the ruins, Leong suggests heading over at about 3 pm and setting up on the far right of the facade, where you’ll find an old tree with exposed roots. “I lowered my camera to capture some of the roots in the foreground,” he says. “If you time it right, you can eliminate some of the crowds by shooting when they pass behind the bushes.” Macao’s pátios (enclosed public courtyards) tend to be highly residential, making them a great place to capture slice-of-life shots. And Pátio do Espinho, a large open-air walled village hidden down a narrow lane off Rua de Dom Belchior Carneiro, is one of Leong’s favourites.

Upon entering the pátio, you’ll find a few outdoor benches for lounging, followed by a network of houses. “By exploring this village, you can better understand what life in Macao was like during the 1950s and ‘60s,” says Leong, who snapped this shot around 3 or 4 pm.

When shooting the area, Leong positioned his lens vertically to show a portion of the winding lanes and the tucked-away houses. “In this case, I timed it exactly when a cat wandered by to add life to the image,” he adds. Just a 10-minute walk from the Ruins of St Paul’s, you’ll find the Hong Kung Miu Temple on Rua de Cinco de Outubro. This place of worship was constructed more than 200 years old in 1860, making it one of the city’s oldest Chinese temples.

Keeping tradition alive, the Buddhist temple continues to be a place where residents who work in the city’s commercial centre pray to deities like the Immortal Chief General Hong Kung (康真君), thought to protect wooden buildings from fires; Fa Fan Leong Leong (花粉娘娘), a god of beauty, love and marriage; and Sei Fong Choi San (四方財神) who worshippers believe can bring them wealth. Collectively, the gods at this temple are believed to protect families and businesses in the area.

Leong wanted to photograph the temple’s beautiful details, so he set up in the late afternoon and composed the frame to include hanging incense cones, gold-painted calligraphy and traditional carvings – all offset by the partly shaded open door. 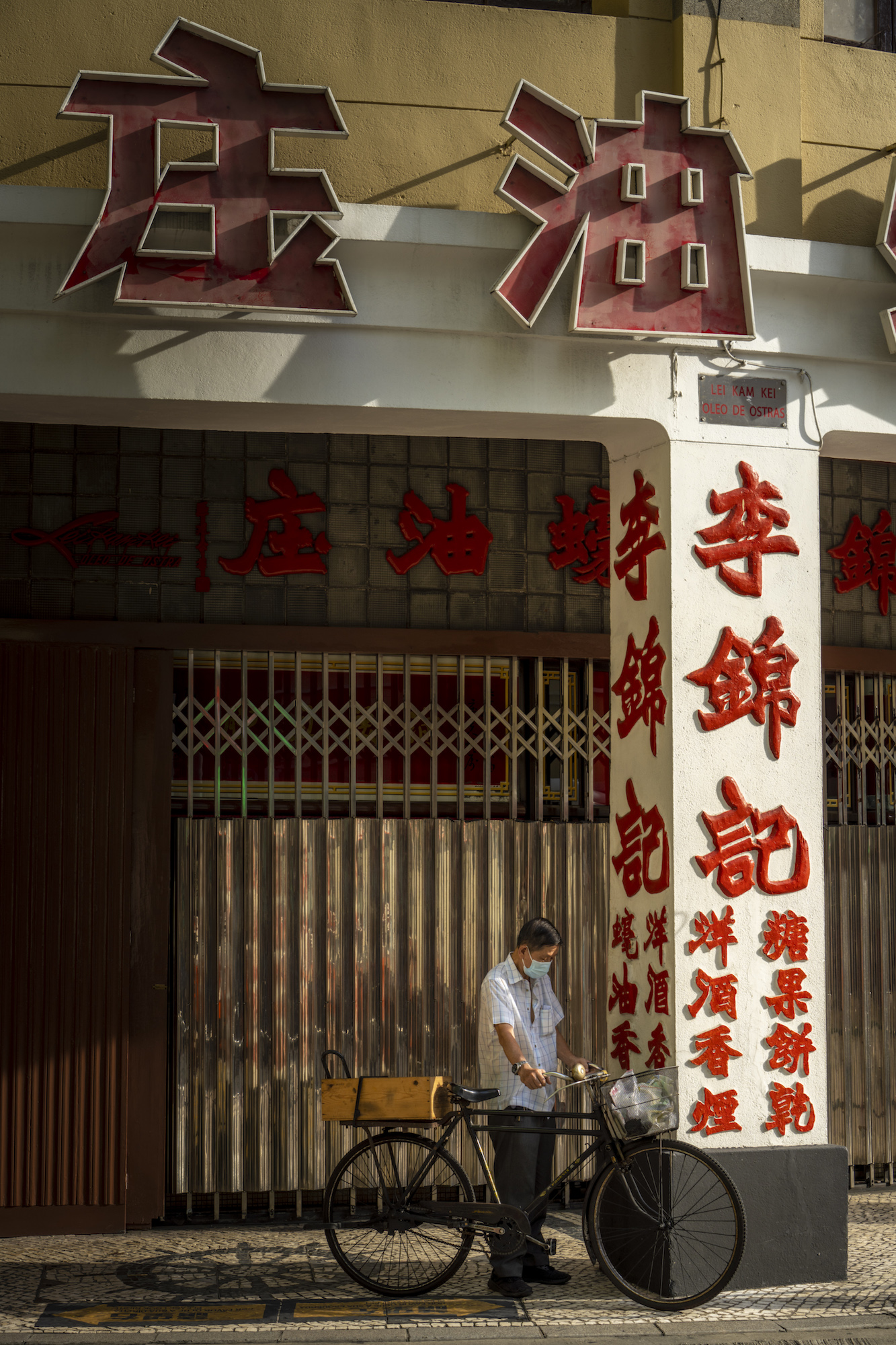 “Once the commercial centre of the city, San Ma Lou (also known as Avenida de Almeida Ribeiro) still showcases remnants of the neon signs that dominated this street in the past,” says Leong. The main thoroughfare sees all passersby of all stripes – families out for a walk, business executives on the way to work, older residents peddling to dim sum – making it an ideal choice for those who appreciate everyday street scenes.

“I shot this one around 4 pm and waited a while for the man and his bike to inch toward a pillar decorated with traditional Chinese signage,” says Leong. 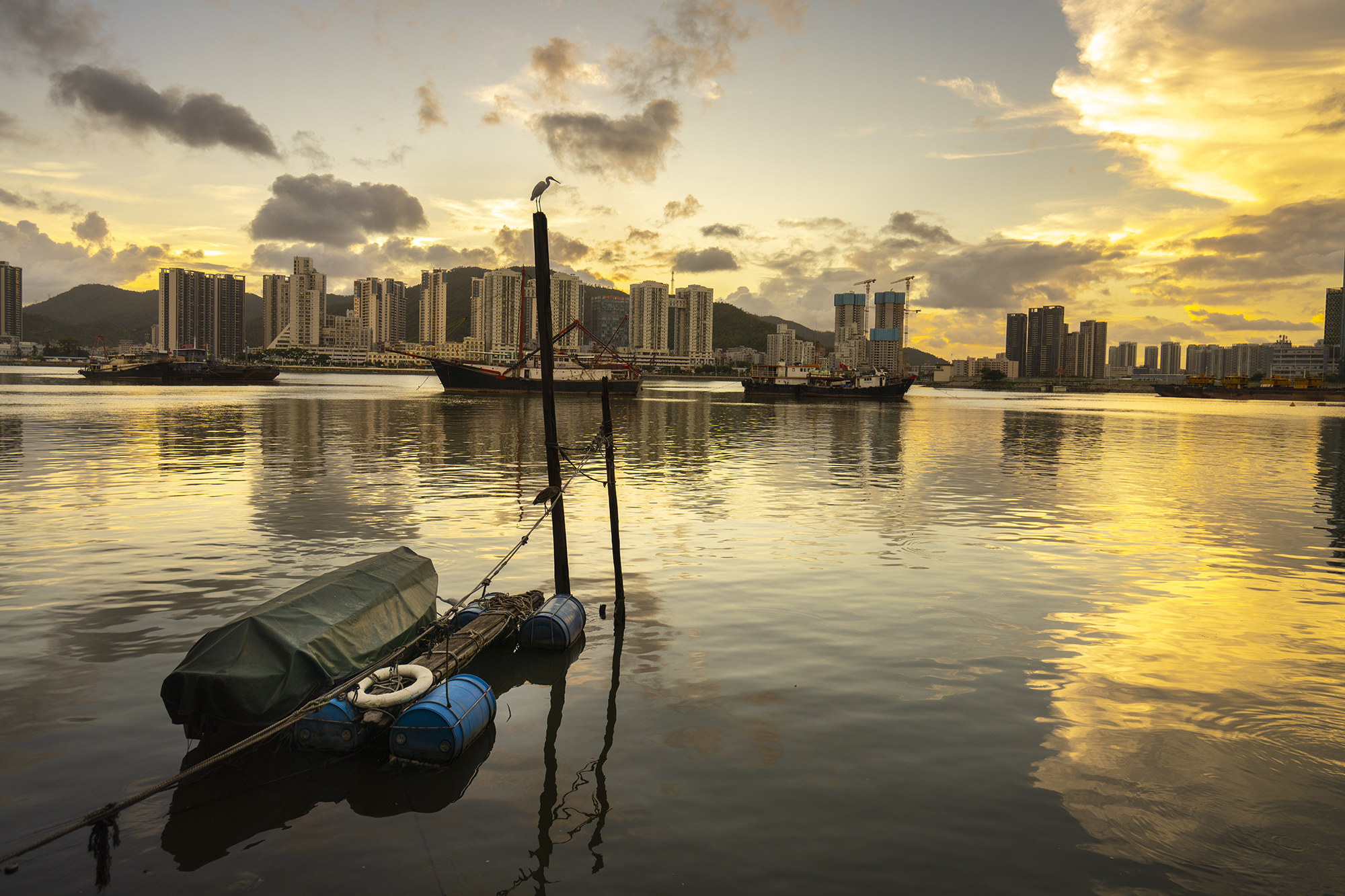 Macao has an unforgettable sunset, which Leong says is best shot from the northern end of the city’s main peninsula. You could find a relatively quiet place to shoot along much of the Inner Harbour – once a busy area with boats moving to and from southern China – but Leong recommends the water’s edge, close to the Sofitel Macau at Ponte 16 Hotel, in particular. “I moved closer to sea level as the sun was setting,” recalls Leong. “That way, you can also see Zhuhai right across the water.”