Frosty and refreshing, open-water winter swimming has become a favourite pastime for many of the city’s older residents who find community, mental stamina and physical endurance in the sea. 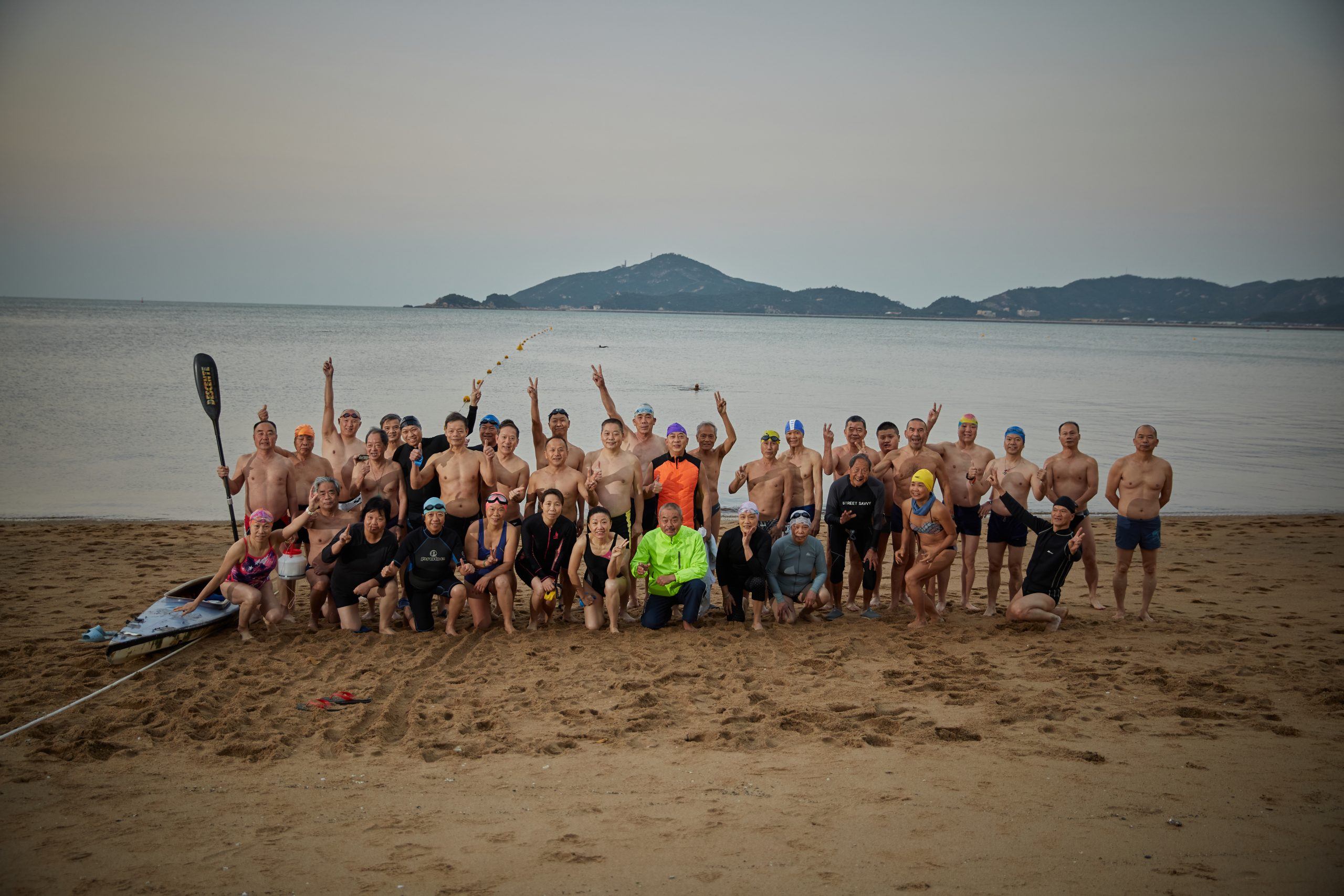 Almost every day for the past three decades, Mun Hong Cheong has woken before sunrise at 5:30 am. He canoes for over an hour from Cheoc Van Beach to Lotus Bridge, which connects Cotai with Hengqin Island, then returns to Cheoc Van to swim in the icy cold water.

“After canoeing, swimming is a way for me to relax. You never know the zing of winter swimming if you have not tried it,” says the 64-year-old, noting that water temperatures range from 1 to 8 degrees Celsius in the winter. “Once you have finished swimming and cleaned off, you feel enveloped in freshness.”

“You also experience a better appetite, deeper sleep, better mental strength and will be less likely to catch a cold,” he continues.

Like Cheong, many people have fallen in love with winter swimming in Macao over the years. Not only do they cite many health benefits, but they also appreciate the social, relaxing atmosphere at clubs like the Macao Winter Swimming Club – officially known as Clube de Nadadores de Inverno de Macau. As one of the city’s 19 dedicated swimming clubs, the group welcomes roughly 50 swimmers who regularly enjoy the open-water exercise all winter long.

“You can still go winter swimming in Cheoc Van without joining our club, but our members really appreciate the community atmosphere,” says Cheong. “We have members from all walks of life, from various industries, such as finance, construction and navigation. What we share in common is that we want to stay healthy and meet friends who also love winter swimming.”

The first wave of interest

In Macao, winter swimming started to gain popularity in the 1970s and ‘80s. At that time, a series of swimming sheds along NAPE served as go-to swim spots for local people to change, shower and relax by the coast.

It was during this time, in 1975, that the Macao Winter Swimming Club began to assemble, though it was not officially registered as a club for another decade, in 1985. Two years later, in 1987, the city held its first New Year Winter Swimming Competition, drawing at least 100 participants to brave the icy waters of the Outer Harbour.

As time went on, the swimming scene became more organised. For example, the Macao Workers Swimming Shed organisation set up five divisional sheds along the coastline – one was open to the public, while the other four were assigned to different clubs.

“When the two clubs merged, our founding president, Ping Ming Wong, bought a [building] in Cheoc Van with its ground floor for the club to use,” recalls Cheong, a long-time swimming coach who is now the Macao Winter Swimming Club’s executive. “Back then, we had 20 members. It has been a long time – people come and go, but now we have around 50 members.”

Cheong is no stranger to cold and open-water swimming. He worked as a frogman – a scuba diver and underwater swimmer trained for tactical operations – for the Macao Customs Service department from 1984 to 1994, and also led the custom department’s diving team for a few years.

But open-water swimming is not for everyone, he says. Even experienced swimmers who have trained on teams or swim laps daily might find it disorienting at first because they are used to pools. “You have a sense of direction in the pool; however, since Macao’s seawater is quite turbid, it’s hard to adjust. Once you are used to open-water swimming, though, you’ll love it.”

A sense of community

According to Cheong, a deep-rooted community spirit “holds everyone together”, even though members tend to swim in small groups or solo on their own schedules.

Many retired individuals and office workers prefer to swim in the early mornings, while some strong athletes enjoy swimming in the dark, Cheong observes. The club also participates in various events and competitions in mainland China and Hong Kong. “We have been invited to various places, such as Wenzhou and Shaoxing [in Zhejiang province], Xishuangbanna [in Yunnan province] for competitions,” he says. “We also join the Hong Kong New Year Winter Swimming Lifesaving Championships every year [though it was cancelled in 2021].”

The approximately 800-metre race starts on Middle Bay Beach and finishes at Repulse Bay Jetty. “It’s a great gathering, where we travel to Hong Kong in the early morning, swim first thing, then kick about town and enjoy dinner together.”

As the vice president, Kei Kin Chao, 72, is one of the club’s most dedicated swimmers. He has swam nearly every day for the past 40 years.

“When I was in my 30s, I remember visiting the swimming sheds – they were made of bamboo at first, then later solid wood followed by cement – and competing with friends in our own winter swimming competitions,” he says. “Now old friends, [some of us] still meet regularly, diving into the water, relaxing together. It is delightful to swim with friends; they are the reason why I still maintain this habit.”

Of course, many things have changed, too. Over the last few years, Chao says he has seen improvements when it comes to water clarity and cleanliness – a positive development for athletes and residents alike.

“There used to be quite a lot of rubbish in the sea and on the beach, floating from Hengqin, especially during the summer,” he says. “It happened quite frequently. Over these years, the Municipal Affairs Bureau has done a great job to clear the rubbish … now Cheoc Van is cleaner.”

‘Every day, the sea feels different’

At the moment, Macao Winter Swimming Club members tend to be on the older side, ranging in age from 35 to 90. Cheong attributes this is partly due to the wellspring of exercise options, from sailing to hiking, paddleboarding, biking, canoeing, group classes and standard gym memberships.

“Unlike the old days, when we did not have many choices, youth today can do so many things,” he says. “We do see many young people swimming, but open-water winter swimming is usually not their first choice.”

In addition, it really tests your stamina and endurance – plus it can be dangerous, depending on weather conditions, so you have to know what you are doing. “When it gets very cold, with a whipping wind, it is hard to bring yourself to dive into the water,” adds Cheong. “You must have great stamina. But once you get in, your body temperature adjusts to that of the sea.”

But such challenges haven’t stopped Felix Keng Fong Cheong, 35, from diving in. Cheong is the youngest member of the club, as well as the son of executive Mun Hong Cheong. Guided by his father, Felix Cheong has been swimming in the sea since he was a child. He has also been part of the Macao swimming team for the past decade, competing at national races such as the open-water swimming championships at Qiandao Lake southwest of Hangzhou in mainland China, the Hong Kong New Year Winter Swimming Lifesaving Championships and Hong Kong’s New World Harbour Race.

Around five years ago, he joined the club because he loved the warmth of the community.  “Whenever I go to the club, I always see the same people. It feels so different from swimming at a public pool where you swim and leave,” says Felix Cheong. “Sometimes, the club arranges gatherings and events, such as group dinners or a ceremony for Chinese New Year. The community spirit is strong.”

Like many members in the club, he prefers to swim in the mornings before work, which he describes as a “natural” and “invigorating” way to start the morning that makes him feel more alert and efficient at work.

“Every day, the sea feels different – the temperature, surrounding and weather. Sometimes it is too foggy [or stormy] to swim safely. But the hardest part is the moment when you dive into cold water – it really tests your stamina,” says Cheong. “It is always a new experience and a challenge.”

Though he doesn’t have a formal membership, Manuel Geraldes, who sits on the Macau Military Club’s board of directors, is also a regular face at the Macao Winter Swimming Club. Geraldes fell in love with open-water swimming about two years ago, in 2019, and visits Cheoc Van Beach every morning for a swim.

"The sea gives me a sensation of freedom. I have many ideas on my mind – about my work, my day and life. When I swim, I can open my mind and think about them deeply.”Manuel Geraldes 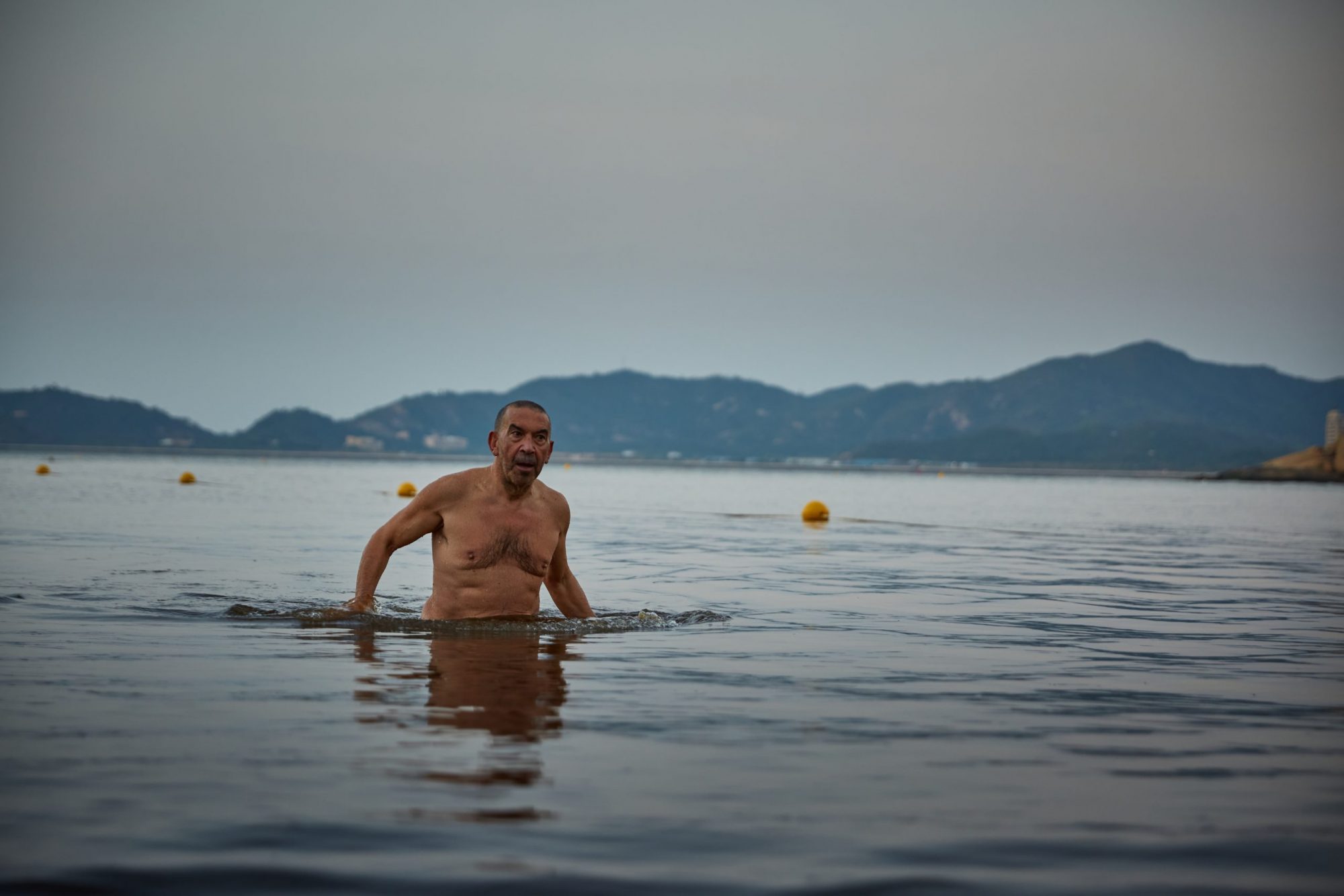 “I have been in Macao for 33 years now. It took me 31 years to discover the joy of open-water swimming,” he says.

Geraldes, 70, used to swim in pools. But three years ago, he suffered from nose inflammation and his doctor recommended that Geraldes avoid swimming pools. That’s when he took his first plunge at Cheoc Van Beach – and he was hooked instantly.

“Now, I go swimming at 6 am every day. I park my car and walk to the beach, carrying just my shoes and shorts,” he says of the hour-long morning routine. “The sea gives me a sensation of freedom. I have many ideas on my mind – about my work, my day and life. When I swim, I can open my mind and think about them deeply.”

Geraldes not only appreciates the meditative quality of swimming, but also the social side of the sport. “It’s all about the friendships,” he says. “The club members are very friendly and the atmosphere is inclusive.”

He says the club comprises people from all walks of life – some arrive by motorbike, others in luxury cars or cheap vans. Yet a mutual love for swimming connects them. “It’s a pity that I can’t speak Cantonese, and some members don’t speak Portuguese, but we can still communicate,” he says. “They always give me advice on swimming in the sea.”

After two years of regular open-water swimming, Geraldes feels stronger and more in tune with his body. “When you swim, you don’t put any pressure on your body parts, unlike jogging. I feel a sense of harmony. I sleep deeper,” he says. “Morning swims make me feel a little bit tired [at first], especially at my age, but I feel more energised [in the long run].”