Manuel Geraldes has witnessed historic shifts in both Portugal and Macao, fitting for the head of one of the region’s oldest institutions, Macau Military Club. 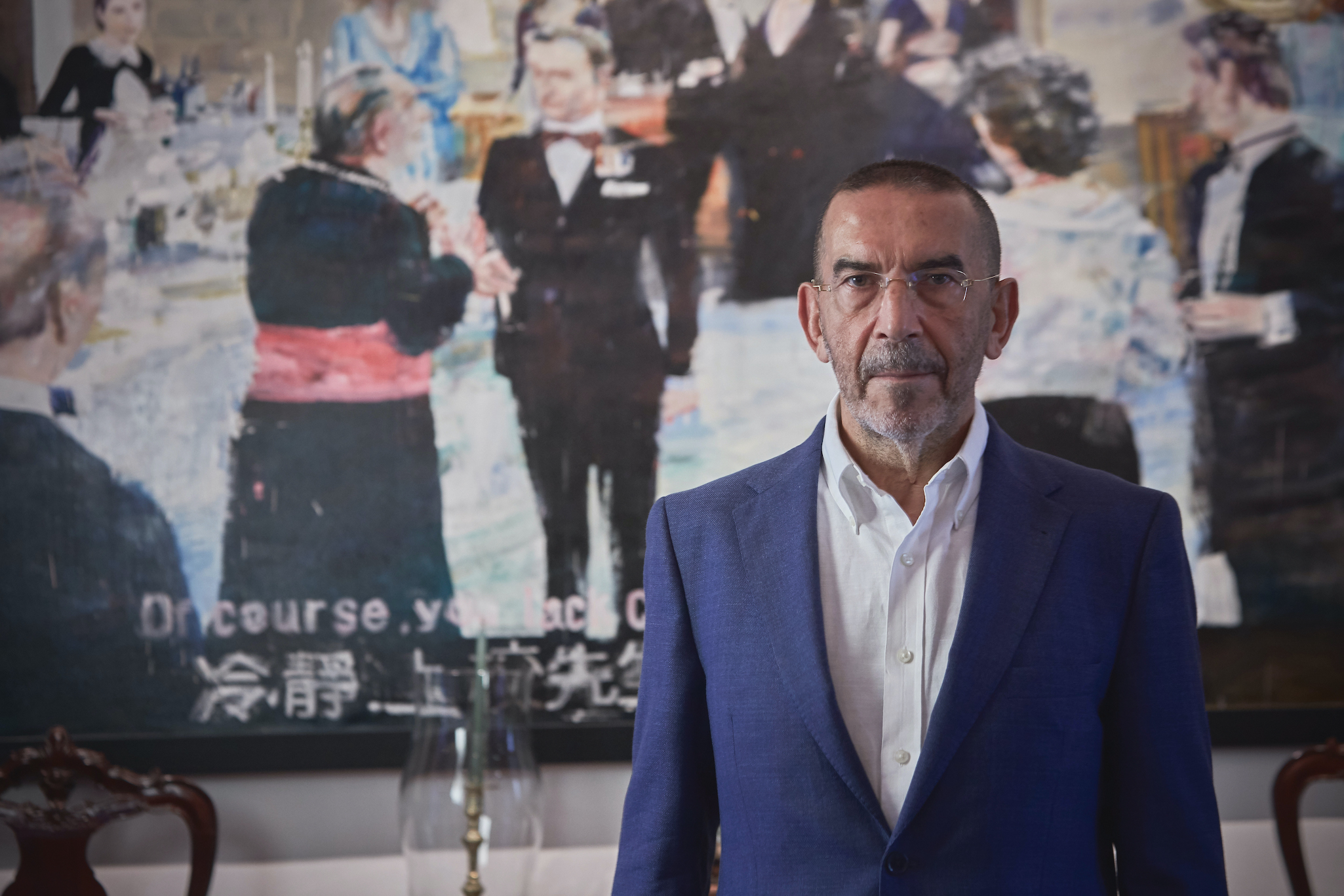 Not many people can say they have witnessed the most pivotal moment in a generation, but Manuel Geraldes was part of not one, but two historic shifts: The 1974 Carnation Revolution and the 1999 transfer of Macao’s administration. Both changed Geraldes’ life in different ways and led him to his role today, as the face of the Macau Military Club, one of the region’s oldest institutions.

Born in the northern Portuguese town of Morais on 12 February 1950, Geraldes was one of five children: two girls and three boys. He left home after finishing primary school in 1960 to attend the Seminário da Congregação do Espírito Santo (Seminary of the Congregation of the Holy Spirit), first in Régua and later in Braga.

He abandoned his religious studies in 1966 at the age of 15. Wanting to follow another path, Geraldes did everything he could to get expelled. “I was severely punished. I ended up working in the fields as if I were just another farmer,” he recalls.

Geraldes moved to Bragança to finish secondary school, then applied for admission to the Portuguese Military Academy in Lisbon. He wanted to be a pilot, but flat feet (a condition in which arches collapse, leading to muscle strain and instability) disqualified him from enlisting. Instead, he worked as a manager at an elderly home in Bragança and then joined Porto’s Finance Department before attempting to enlist in the army again in 1969.

This time, he was admitted. Geraldes then completed a military administration course in the summer of 1973. “The academy was a very good school,” he recalls. “I had great teachers, men whom I still admire and respect to this day. I was fortunate to meet many of them again during the lead-up to the 1974 revolution.”

Among the teachers he admired most was Captain Manuel Monge, who would later serve as Secretary for Security under Macao’s last Portuguese governor, General Vasco Joaquim Rocha Vieira.

“It was a very good school, where I gained life experience. It had a very healthy environment where the values ​​of camaraderie, loyalty and openness were very much appreciated,” he says. “I had great teachers, men who still have great respect and admiration to this day. Some of them I was lucky to find years later when preparing the coup d’état.”

In early October 1973, Geraldes entered the Escola Prática de Administração Militar, or the Training School for Military Administration (EPAM), graduating with the rank of student-lieutenant (aspirante).

During his second and third years at the academy, he began to build closer relationships with some of his professors. This is when the “anti-regime, progressive and democratic Manuel Geraldes” started to emerge, he says. And when two superiors shared a conspiracy by army officers to overthrow the regime with him, he joined the group.

In December 1973, Geraldes became a military administration representative on the commission responsible for coordinating the Armed Forces Movement, spearheading the coup d’état ending 48 years of dictatorship in Portugal. At the age of 23, he was one of the youngest of the so-called ‘Captains of April.’

When the regime fell on 25 April 1974, Geraldes had been commanding his first conscript (a group of soldiers drafted into the military). He was part of the group occupying the Portuguese Radio and Television (RTP) building, a strategic point in the operation. “It was an unforgettable night. It was worth a lifetime. If I had nothing else to carry over to the other side, this would be enough.”

In 1974, he became the administrative director in RTP’s programming department, joining a military team headed by António Ramalho Eanes, who later became president of the Portuguese Republic.

During the tumultuous events of 25 November 1975, when political unrest almost led to civil war in the country, Geraldes was held under arrest for several hours. He was one of the signatories of the “Document of the Nine”, advocated by a group of nine armed forces officers supported by the Socialist Party, which proposed an alternative to the crisis and opposed the more radical military. The document endorsed the establishment of a pluralist political regime and the continuation of the Constituent Assembly.

Geraldes left RTP in 1976 after the first constitutional government, led by Mário Soares, disbanded the military group that was at the time in charge of the station. Next, the army appointed him Chief of Staff of the Office of the Armed Forces, tasked with producing an instructive series on the team’s new Constitution of the Republic for military training.

At the same time, he began studying Economics and Sociology at the newly founded NOVA University Lisbon (UNL), attending classes after work. Geraldes returned to EPAM in October 1979 and participated in the first operational unit for logistical supply and transportation support in the Portuguese army. He completed his degree at UNL in 1980, having spent an interim year in the United States to attend a logistical training course at the US Army Quartermaster School.

While managing the military tourism complex in the southern Portuguese city of Lagos from April 1982 to May 1984, he returned to Lisbon and joined the Army Food Department.

In September 1985, still a Captain, he moved to the Institute of Higher Military Studies to manage the finances on the administrative Board of Directors. He also supervised the Pedrouços officers’ mess (Messe de Oficiais de Pedrouços), which served official banquets for NATO, delegates, and world leaders.

He was promoted to major in December 1985. While working in Lagos in 1986, Geraldes had dinner with Army Chief of Staff General Jorge Salazar Braga, and they discussed the possibilities in Macao.

Geraldes arrived in Macao in February 1988 to take up his new post as the financial manager of the Security Forces Command, where he remained until September 1996.

Then-Secretary for Security Manuel Monge asked him to become his adviser. “It was almost a poisoned invitation. I became the security forces’ spokesperson during perhaps the most difficult period when there was a complex web of violence,” he says, recalling the last years of Portuguese administration in Macao.

He left the position when the transition culminated on 19 December 1999, and on the same day embarked with the entourage of former Macao governor Rocha Vieira. Geraldes returned to Portugal on a round-trip ticket since his second wife, with whom he had a second daughter, stayed behind in Macao. After transferring into the Army reserves at his own request, he returned to the city on 20 January 2000.

In 2001, Geraldes – fluent in Portuguese, English, French and Spanish – became the AICEP Portugal Global representative, a government business entity encouraging foreign companies to invest in Portugal, in Macao. He remained in the position until 2007 when he took a job as a compliance officer at Caixa Geral de Depósitos bank for nearly three years. Meanwhile, he served on the administrative board of the Malo Clinic for just over a year.

After retiring in 2011, he has since devoted his time to his family and the Military Club, an institution founded in 1870. Having been a member since 1988, Geraldes took up the reins as President of the board of directors in 1992. He has undertaken many initiatives since, including the building improvements to prepare the club for the administration transfer from Portugal to China. Aside from taking a short break between 1998 and 2002, Geraldes has remained in the post since.

Besides the family, the club is his life and where he spends most of his time. From morning to night, he prepares many activities – food events, art exhibitions and concerts – for the club and spends time in the restaurant, where he welcomes all who come to dine.

In recognition of his dedication to the club and his work with the Security Forces of Macao, the Macao government awarded Geraldes the Medal of Valor in 1997. Among other decorations, he also received the Order of Liberty (Grand Cross) in 1986 from former Portuguese president; the Distinguished Service Medal (Silver) from the Army Chief of Staff; and two Military Merit Medals in Portugal.

Geraldes occupies his free time with hobbies such as reading and open-water swimming. Whether in the morning or the afternoon, it’s a rare day that he doesn’t swim a few strokes off the coast of Cheoc Van Beach in Coloane.