A 26-year-old South African man smuggled over one kilogramme of cocaine in the soles of his shoes into Macau. 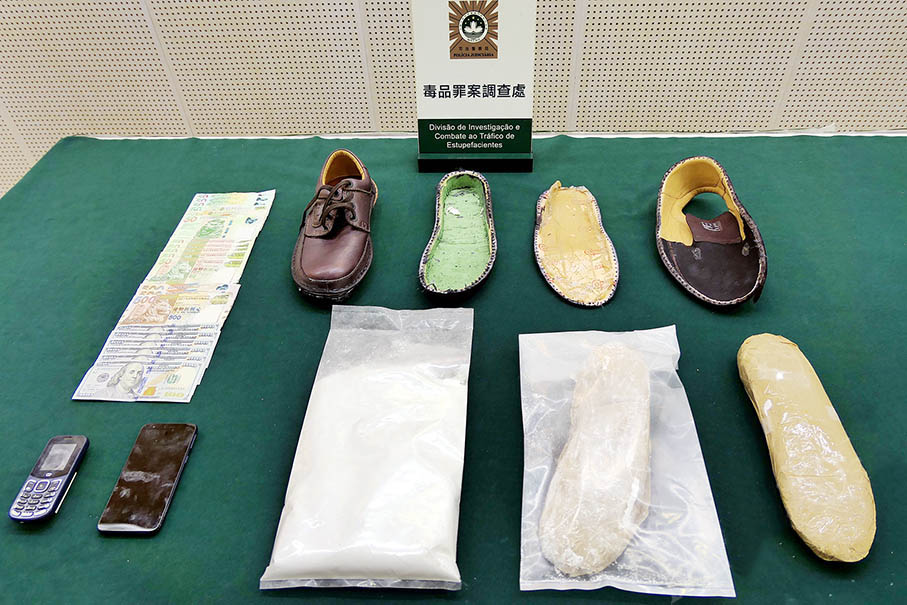 A 26-year-old South African man smuggled over one kilogramme of cocaine in the soles of his shoes into Macau, the Judiciary Police (PJ) and Public Security Police (PSP) announced at a joint press conference on Tuesday.

PJ spokesman Lai Man Vai said that the smuggled cocaine was worth about MOP 3.5 million (US$437,000).

Lai said the suspect, surnamed Blou, flew from South Africa to Singapore on Saturday, then flew from Singapore to Macau and landed at the local airport at 5.45 p.m. on Sunday.

Under questioning, Blou was unable to tell the police the purpose of his visit, and the shoes he was wearing looked odd because they appeared to be heavy, so they initially suspected Blou was smuggling drugs in his body and reported the case to the Judiciary Police.

Lai said that the police found 1,060 kilogrammes of cocaine hidden in the soles of his shoes. Blou confessed that a gang bought him the ticket to fly from South Africa to Macau via Singapore. He was told to wait for a member of the gang in Macau to contact him to receive instructions as to what to do next.

According to Lai, Blou said he had been paid an initial US$900 (7,200 patacas) and was promised an additional US$600 when the job was done.

The suspect had been transferred to the Public Prosecution Office (MP) for further investigation, facing possible arraignment on drug trafficking charges.