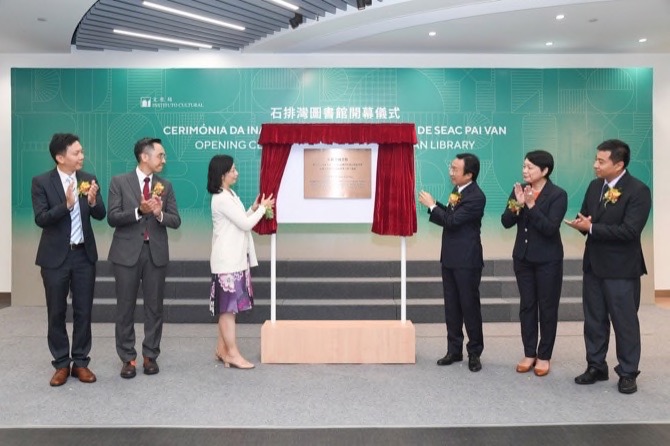 The new Seac Pai Van Library, which is on the sixth floor – the top floor – of the building, opens from 2 p.m. to midnight on Mondays, and from 8 a.m. to midnight from Tuesdays to Sundays, the statement said. The Community Complex’s car park, on the third to fifth floor, came into service in December 2017. The supermarket, which is on the first floor of the six-storey building, opened in February last year. The supermarket, officially known as Integrated Shopping Centre, includes the sale of fresh food.

An activity centre run by the Municipal Affairs Bureau next to the newly opened library started operating in June last year. Its recreational area on the rooftop of the complex opened in July this year.

With a total area of 2,074 square metres and more than 300 reading seats, the Seac Pai Van Library is a “comprehensive public library that integrates the functions of learning, leisure and social intercourse”, the statement said.

According to the Macau Post Daily, the statement said that the library “features a beautiful environment with an extensive mountain view and an inner garden”. It currently has a collection of some 40,000 volumes and 3,500 audiovisual materials, with a storage capacity up to 75,000 volumes.

In addition to a reading space, the library also features social interaction areas, such as a multifunction room, a group discussion room, and a family zone, the statement said.

In addition to the general library functions and areas, such as a periodicals area, a reading area, a self-study area, a children’s reading area and an audiovisual materials area, the library also features a nursing room and a self-service station, the statement said.

The Seac Pai van Library was inaugurated by Secretary for Social Affairs and Culture Alexis Tam Chon Weng Tuesday morning, accompanied by five other officials from different government entities, including Cultural Affairs Bureau President Mok Ian Ian, after which Tam and other officials and guests toured the library during which they were briefed by IC officials about the new library’s spatial configuration, facilities and services.

Delivering a speech during Tuesday’s ceremony, Mok said that the opening of the Seac Pai Van Library “is of major significance to improving the distribution of reading materials” in the city’s islands district (comprising Taipa, Cotai and Coloane).