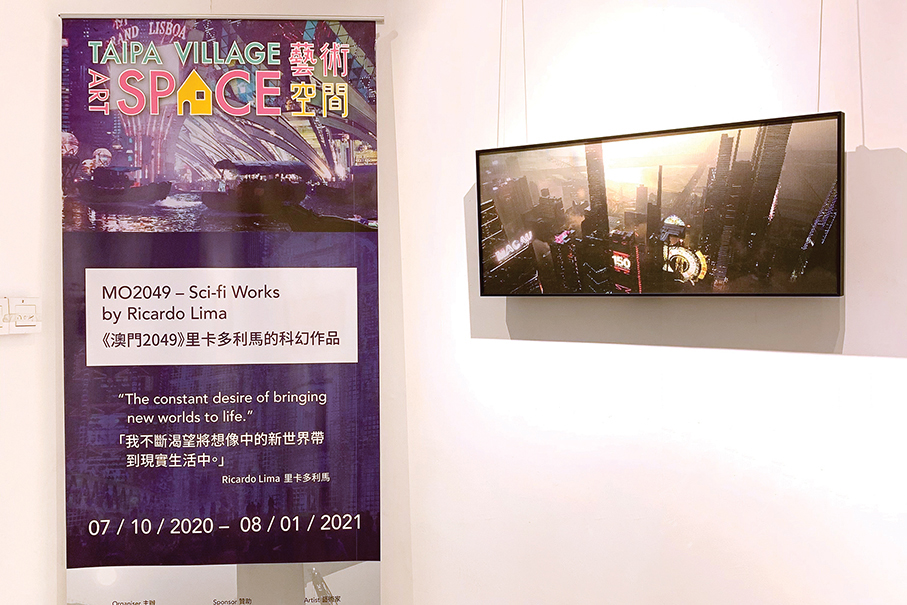 The exhibition displays a concept art collection showcasing a glimpse of Macao’s future, according to a statement by the association.

Lima is a concept artist and illustrator working in the entertainment industry. He graduated in Drawing at the Academia Nacional de Belas-Artes in Lisbon and later moved to Singapore where he studied at the FZD School of Design.

After completing his studies, Lima returned to Portugal and began freelancing. He recently worked with Eidos-Montréal on an exhibition entitled “Shadow of the Tomb Raider”, and he is now part of the One Pixel Brush team, according to the statement.

Lima has taken the exhibition as an opportunity to develop a personal project using Macao, a place he has never visited before, as the backdrop for a film viewed through a dystopian lens.

Lima has focused his imagination on Macao’s future to create a powerful representation of new realities through his artwork, driven by his “constant desire to bring new worlds to life,” according to the statement.

His science fiction narrative depicts a relationship between megacities and Mother Nature as the cycle of change accelerates towards an anthropogenic (i.e. the impact of human activity on Nature) future, the statement points out. In doing so, the body of work presented explores realistic visions of potential environments that captured his imagination, such as Macao’s port area and waterfront, remnants of the past, immersive public space and food markets, the statement says.

The statement also points out that Macao’s rapid evolution has prompted Lima to explore the city’s transformation into a fascinating destination à la New York, Shanghai and Hong Kong – all flourishing, busy cities that are globalised, hyper-dense, diverse, well-established and packed with cutting edge urban infrastructure – as it takes place in the near future.

At the exhibition, the Ruins of St Paul’s are reduced to a huge, “frivolous” hologram and a backdrop for an open-air night market, the statement says. The Grand Lisboa is the setting for a downtown docking area where yachts and sampans meet to load and unload merchandise and commuters. In order to give visual expression to the vibrancy and transformation of the city into something new, Lima’s digital illustrations overlay two images and are printed using a diffraction grating, a high-tech optical device that separates light into its constituent colours and produces a polychromatic spectra reminiscent of lighting effects in sci-fi films, according to the statement.

The work enhances the futuristic vision and animates the captured environment with palpable qualities of change and dynamism, the statement says.

The exhibition runs until 8 January at the gallery of Taipa Village Art Space in 10, Rua dos Clérigos in Taipa. It opens daily from 12 pm to 8 pm. Admission is free.