From the archives: The man who made St Paul’s and the secrets behind the ruins that few tourists know Link copied

Although today it stands in ruins, framing photos for visitors from across the world, St Paul’s was one of Asia’s most important religious learning centres, founded by Italian Jesuit Alessandro Valignano. Nearly everyone who visits Macao will see the ruins of St Paul’s. Most just see the façade of the majestic Catholic cathedral that once towered over the city. Few will know about its deeper secrets – including the fact that it contained the first Western university in East Asia as well as the tomb of the man who pioneered the teaching of Chinese and Japanese to Europeans.

St Paul’s College of Macao was founded by an Italian Jesuit named Alessandro Valignano, who was sent to the city in 1573 and died here in 1606.

He helped to build a network that would serve Catholicism in India and Japan centred around the college he established in Macao. Here, Jesuit scholastics, mostly from Japan, trained for missions throughout the region for 168 years until 1762, when the Society of Jesus (the Jesuits) was expelled by the Portuguese authorities.

The college and cathedral next to it were destroyed in 1835. They were never rebuilt, leaving only the ruins for visitors to enjoy and think of the glory of what once existed, as well as the grandeur of the Jesuit vision to convert Asia to Catholicism.

An Italian enters the Portuguese mission 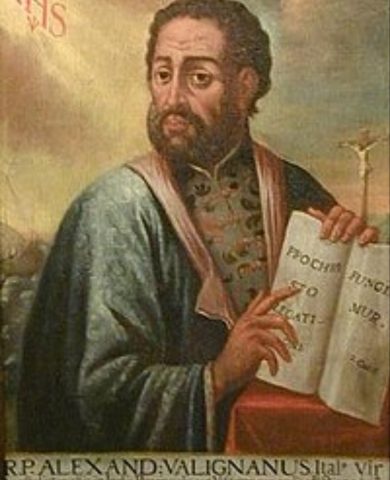 Valignano was born in February 1539 in Chieti, part of the Kingdom of Naples in southern Italy. He studied law at the University of Padua, where he was an outstanding pupil of the Archbishop of Chieti, Monsignor Giambattista. He joined the Society of Jesus in 1566.

In 1573, at the age of 34, he was appointed ‘Visitor of the Missions in the Indies’ – chief of the society’s work in Asia – and given free rein to work as he sought fit. It was a remarkable promotion for someone so young.

The appointment was controversial – an Italian working in a sector dominated by Portuguese – but he was a charismatic and determined man.

Valignano arrived in Macao in September 1578 and found, to his dismay, that all the missionaries had failed to establish themselves in mainland China, mainly because they could not speak, read or write the language.

After writing to his superior in India, he was sent help. Michele Ruggieri arrived in Macao in 1579 and, in August 1582, Matteo Ricci joined him. These two Jesuits would become the first European scholars of China and the Chinese language.

Meanwhile, in July 1579, Valignano left for Japan, where he would spend the next three years and focus on his work for most of his life.

When he arrived, the foreign missionaries complained to him that language training was non-existent – after 15 years, they still could not preach a sermon in Japanese, exacerbated by his predecessor, who had deemed it impossible for Europeans to learn the language.

Valignano quickly set about reversing that order. He ruled that all new missionaries must spend two years learning the language.

By 1580–1581, the Jesuits had printed a Japanese grammar book and dictionary with 33,000 entries, on top of several other books in the language.

Valignano’s predecessor had also declared that Japanese people could not become full Jesuits, but the Italian believed they should be treated the same as Europeans.

He ordered Japanese converts in the mission to learn Latin for use in religious services, but the European priests and brothers were ordered to learn Japanese customs rather than the other way around – a methodology he would apply to his work in the China mission as well.

He ordered that the seminaries retain their Japanese character, with tatami mats and students wearing kimonos and eating white rice with sauce and a side dish of fish. But he insisted that missionaries adhered to austerity, which contradicted the custom of giving gifts, an important part of social relations in Japan. As a result, students became alienated from their families. The requirement of confession also offended many Japanese, especially if they had to do it through an interpreter.

Despite the hurdles, his work saw modest success. In the decade after his first visit, 60 Japanese people joined the order as novices. He was able to fund the growing activities of the mission in Japan through Nagasaki’s booming trade – both Nagasaki and another port town, Mogi, had been donated to the Jesuit order by a daimyo (Japanese federal ruler) named Omura Sumitada after his conversion.

As Nagasaki grew in importance as an international port, the Jesuits gained a monopoly on the taxes of all imports into Japan, especially Chinese silk. By 1590, there were 136 Jesuits in Japan and more than 200 churches. The money helped maintain the churches, schools, seminaries and printing presses.

But the Christian project in Japan came to an abrupt halt when Tokugawa Ieyasu rose to power in 1603. First, he ordered all samurai and soldiers to renounce Christianity publicly. Then, he extended this order to the rest of the population.

On 10 September 1632, 55 Christians were martyred in Nagasaki – the Great Genna Martyrdom – and Roman Catholicism was officially outlawed.

But Valignano’s work was not in vain.

When Western missionaries returned after the Meiji Restoration of 1868, they found to their amazement that the church had survived underground for over 200 years, something they regarded as a miracle.

To this day, Nagasaki remains the Roman Catholic centre of Japan, where 509,000 people align themselves with the faith.

Building more than a mission in Macao 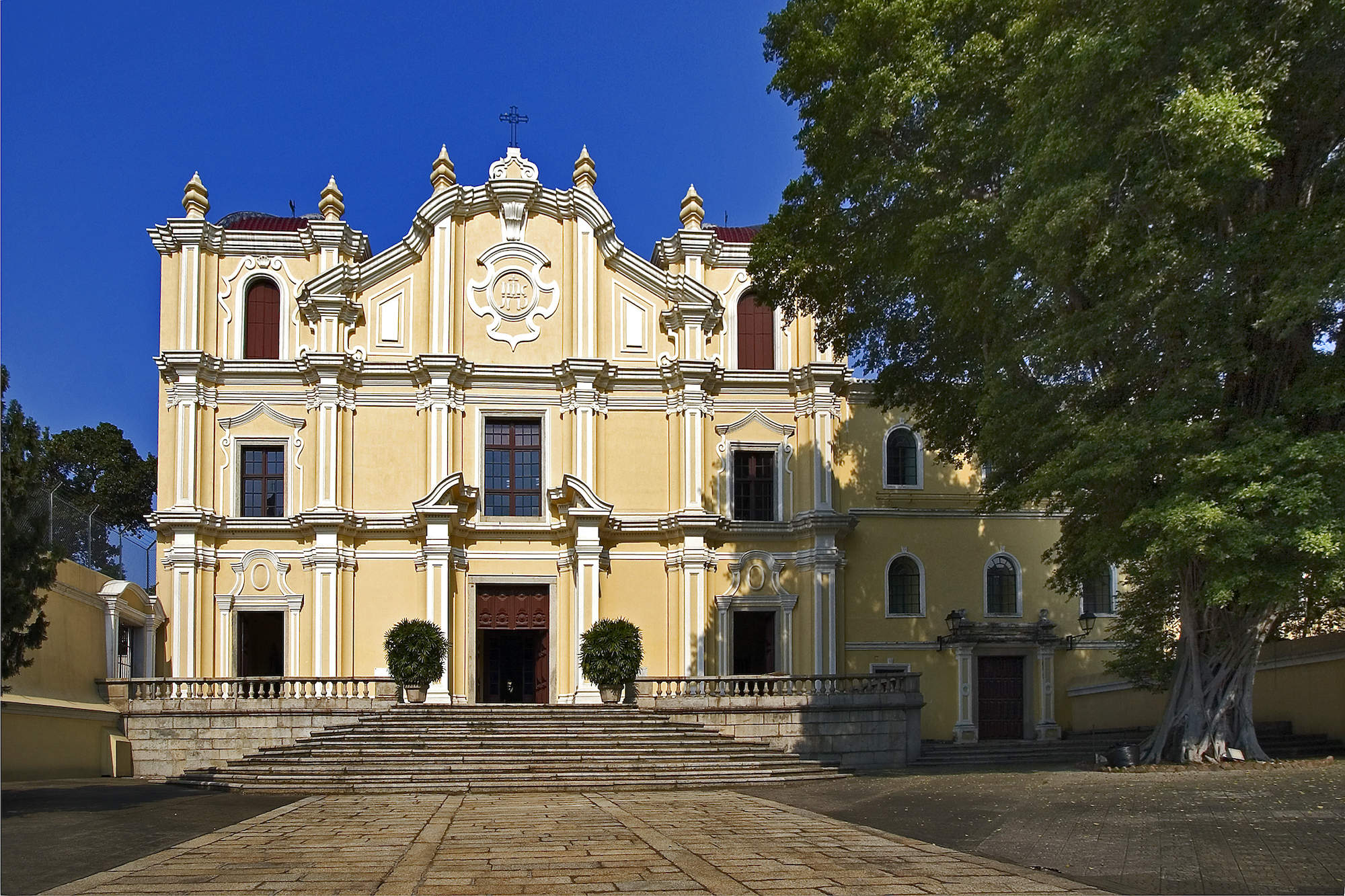 The uncertain conditions in Japan led Valignano to embark on a new project in Macao – the founding of St Paul’s College in 1594. He designed it as both a training centre for Jesuit missionaries in East Asia and a place to educate the young people of the city.

As local students were accepted into the college, the Leal Senado provided money from its coffers, some from the taxes on silk exported to Japan they collected.

Construction took just one year. Macao residents and the Japanese faithful living there supported the project to the extent that the Society did not have to spend anything on the building work, either.

The Jesuit order’s annual report for 1594 reported that the college contained “two very large houses with a beautiful courtyard between them … at the foot of the hill stands the school with a courtyard. The college can hold 40 persons from the (Jesuit) Society in very comfortable accommodation because, apart from the four schools, upstairs there are nineteen cubicles, two halls, two chapels and a large, beautiful infirmary.”

Its courses included theology, philosophy, mathematics, geography, astronomy, Latin, Portuguese and Chinese, plus there was a school of music and arts. The site included two seminaries for lay brothers and a primary school, as well as the college.

It trained the first generation of Western Sinologists, including Johann Adam Schall von Bell, Joao Rodrigues and Ferdinand Verbiest and Chinese priests and brothers like Wu Li and You Wenhui, a native of Macao. Its students came from Japan and India as well as Europe and Macao.

The breadth of education Valignano established meant that St Paul’s became the first Western university in the Far East. It even had Macao’s first printing press, and one of the first in Asia, imported from Europe in 1588.

By the middle of the 17th century, the college had become notably diverse, with teachers, students and missionaries from different countries and cultures, and it was one of the most important religious centres in the East.

In 1732, the Seminary of St Joseph – a 10 minute walk from the College – was established for Chinese students. By 1746, its library had 4,000 books, as well as paintings, atlases and maps. It had a pharmacy famous throughout the Far East, which served the public in Macao and the Jesuit missions in China, Japan and Vietnam.

Until Portugal banned the Jesuits from Macao in 1762, St Paul’s college was the first stop for Jesuit priests going to China. They learned the language and other aspects of Chinese knowledge, including philosophy and comparative religion.

In 1835, a fire destroyed the college and the neighbouring cathedral though St Joseph’s Seminary lives on.

Valignano himself died in Macao on 20 January 1606. The man whom Matteo Ricci called “the Father of the China Mission” was buried next to the college he had founded. Although overlooked by many visitors today, his legacy lives on subtly, and not just in Macao. Today, the remains of what may have been his tomb beneath the ruins of St Paul’s are on display at the site’s Museum of Sacred Art and Crypt.

The prominent missionary still casts a long shadow beyond Macao, too. As one of his Jesuit colleagues wrote in his eulogy: “In God, we lament not only our former visitor and father but, as some would have it, the apostle of Japan.”