Manny Pacquiao produced a destructive and explosive performance in the early hours of Sunday morning, knocking down Chris Algieri six 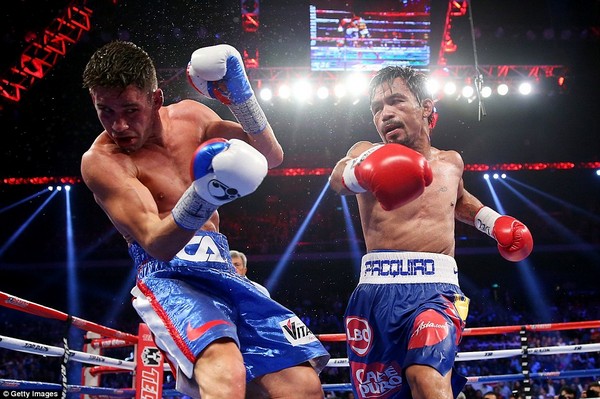 Manny Pacquiao produced a destructive and explosive performance in the early hours of Sunday morning, knocking down Chris Algieri six times on the way to an overwhelming points victory at the Venetian Macao’s Cotai Arena.

Even though Pacquiao was unable to record was would have been his first knockout in more than five years, the clash could not have been more one-sided and was a clear signal of intent from the Filipino star in proving he still one of boxing’s greatest performers.

Pacquiao went into the fight an overwhelming favorite and quickly set about stamping his authority on the proceedings. Algieri had planned on his extra reach and sharp footwork keeping him out of harm’s way and tire the 35-year-old, but it quickly proved to be a forlorn hope.

Algieri came with a good backstory; an intelligent and entertaining man with a Masters degree and plenty of self confidence, but the public will want to see Pacquiao take on a stiffer test next time.

Algieri came into the fight having won all of his 20 professional bouts but was a relative unknown before beating Ruslan Provodnikov in June to win the light welterweight title and set up this showdown.


Algieri went down twice in the sixth, twice more in the ninth, and for a final time in the 10th round. If referee Genaro Rodriguez had waved off the fight at that point, or Algieri’s corner had thrown in the towel, there could have been little cause for complaint.(macaunews)