Asked about the Hong Kong Chief Executive's quarantine waiver during her two-day visit to Macao, the Secretary for Social Affairs and Culture said that imposing full quarantine on visiting officials wouldn’t benefit either side’s decision-making process in the ongoing COVID-19 fight. 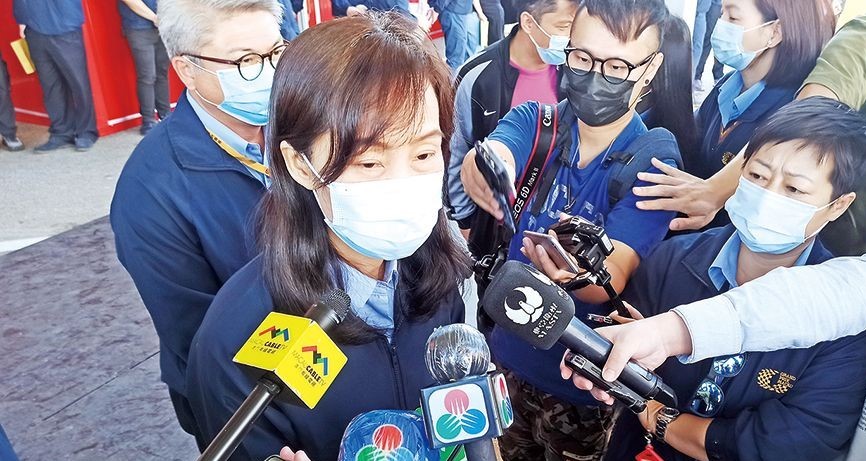 When asked about Hong Kong Chief Executive Carrie Lam Cheng Yuet-ngor’s quarantine waiver during her two-day visit to Macao earlier this week, Secretary for Social Affairs and Culture Elsie Ao Ieong U said that to impose full quarantine on visiting officials wouldn’t benefit either side’s decision-making process to make progress in the ongoing fight against COVID-19.

Ao Ieong made the remarks during the traditional blessing ceremony for the upcoming Macau Grand Prix at the Grand Prix Building in Zape.

Lam arrived in Macao on Monday afternoon to address Tuesday morning’s opening ceremony of the 1st Conference of the International Science, Technology and Innovation Forum (ISTIF) of the Boao Forum for Asia (BFA). She and her small entourage returned to Hong Kong on Tuesday afternoon.

Ao Ieong said that Lam took the nucleic acid testing (NAT) twice – the day prior to her arrival and the day she arrived Macao. She also said that implementing the “closed-loop management” method was not something “completely new”, adding that previously government officials and others from Hong Kong visited Macao for urgent reasons in which the “closed-loop management” method was followed.

Ao Ieong said that, for example, when someone in quarantine has a family emergency and has to visit a family member at the hospital, the government uses the “closed-loop management” method by allowing the person to leave his or her quarantine location for a short while just to visit the hospital. She pointed out that Lam followed the same procedure.

Ao Ieong also underlined that after her visit, the Hong Kong government announced on Wednesday that Hong Kong residents returning from Guangdong province or Macao will be able to skip quarantine starting on November 23.

Ao Ieong also said that during the period when Macao residents could not enter mainland quarantine-free, she herself had also followed the “closed-loop method” to enter the mainland so that she could discuss details about lifting the quarantine requirement for Macao residents arriving in the mainland. She added that quarantine was still necessary but sometimes when discussing policy matters, it was better to discuss them face-to-face, and that was the reason for the “closed-loop management” method.

Ao Ieong also responded to media questions about the recent Education and Youth Affairs Bureau (DSEJ) announcement, which was gazetted on Wednesday, concerning 27 mainland instructors having been invited to offer professional advice to local teachers.

Ao Ieong said that the instructors are not in Macao to teach pupils but to observe and give advice to local teachers, adding that all the 27 are “elite” instructors. She added that the programme has been going on for a while already.

According to a DSEJ statement released last night, the bureau has been inviting “outstanding teachers” from the mainland since the 2008/09 academic year. The instructors work in kindergartens and primary and secondary schools on subjects such as science, mathematics, geography, and history. The statement noted that according to the law, the instructors are paid the same as the government’s 2nd class senior specialists.