Britcham head Keith Buckley says everyone should be thinking what each can do to save the world. 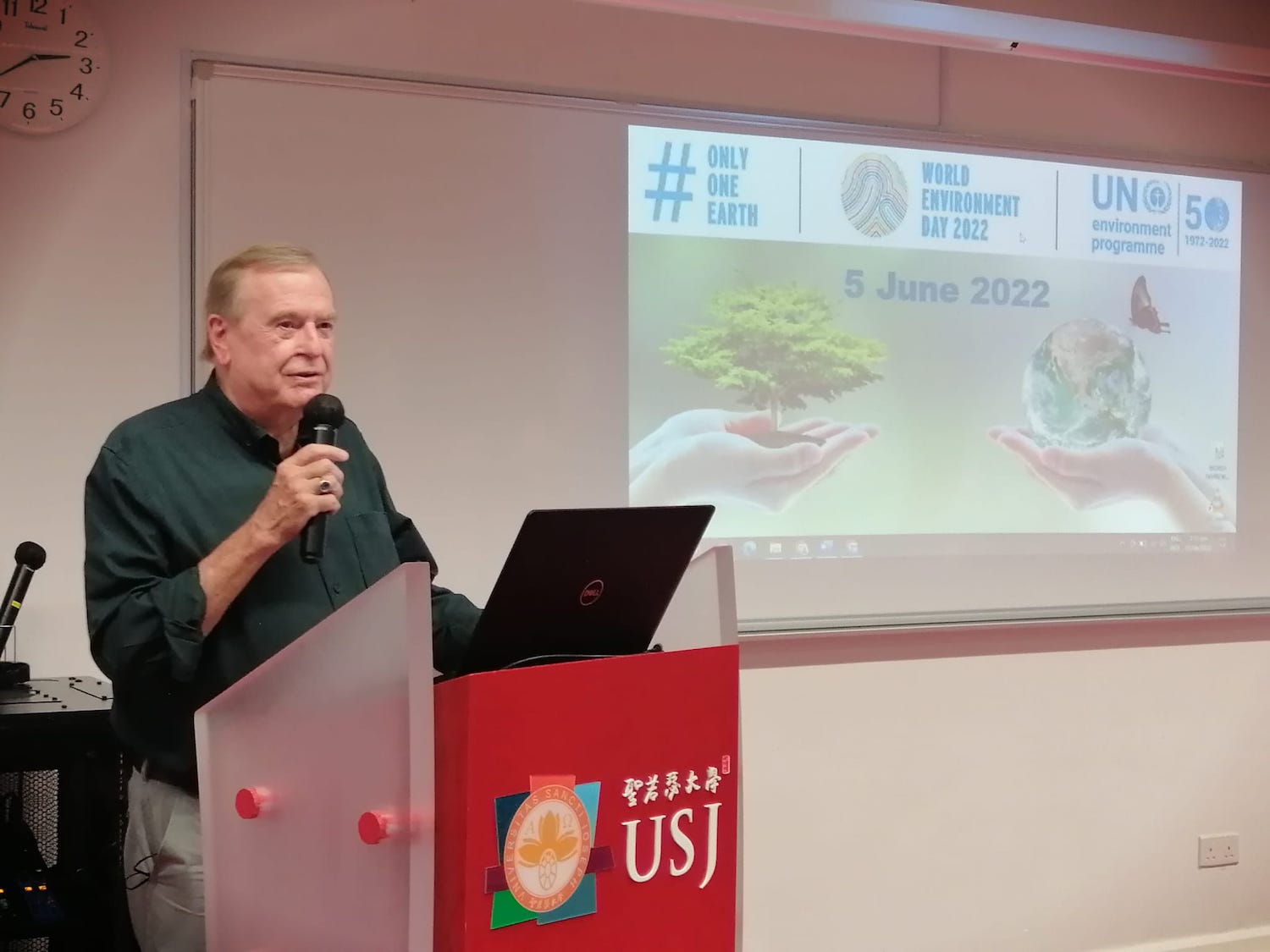 Celebrated annually on 5 June, World Environment Day was first held in 1973. It is the United Nations (UN) observance day to promote environmental protection and raise awareness on environmental issues like marine pollution, overpopulation, global warming, sustainable consumption and wildlife crime. Today, over 140 countries participate in the World Environment Day – this year’s event was themed “Only one Earth”.

Held yesterday at the USJ Ilha Verde Campus, the event presented a series of talks that included the topics of waste reduction in Macao, the danger of microplastics, and mangroves as a source of conventional plastic degrading and bioplastic producing bacteria.

In addition, there were some educational and children’s activities, as well as more than five booths selling food and beverage and sustainable products including Blissful Carrot and zero-waste shop Less is More.

Commemorating World Environment Day 2022, Britcham Macao highlighted the UN’s warning that the world has been using the equivalent of 1.6 Earths to maintain the current way of life … while to limit the global warming to 1.5 degrees Celsius by the end of the century, efforts must be made to halve the annual greenhouse gas emissions by 2030.

“The gap between what we need to spend to adapt and what we are actually spending is widening. Estimated costs of adaptation continue to rise and could reach US$ 280-500 billion per year by 2050 for developing countries alone. Individuals and civil society must play a key role in raising awareness and urging governments and the private sector to make large-scale changes,” said the chamber, which reactivated its Green Committee last year to increase its members’ environmental and sustainability awareness and actions.

In line with mainland China, Macao has set targets to ensure CO2 emissions peak before 2030 and achieve carbon neutrality before 2060. In January this year, the Macao government revealed its second Five-Year Plan for Economic and Social Development 2021-2025, which stressed the need to turn the city into a “low carbon emission centre”.

Britcham Macao Chairman Keith Buckley said: “All of us should be thinking of what each one of us can do as individuals to save our world … we may make our own little contributions in our own way.”

USJ Rector Stephen Morgan said, “There are 7 billion of us and if we all reform, if we all convert our lifestyles to be aware of putting less strain on the limited home that we have, things will change … couldn’t change overnight, of course, but they change remarkably quickly when you look back.” He added that the process of changing people’s mentality towards the environmental protection goals would allow everyone to see that “there is only one earth” that we all share as our home.

Eco-activist Annie Lao shared Macao’s waste recycling and the city’s journey in reducing plastic use among the local population during her presentation.

In protecting the environment through waste reduction and to achieve all the green objectives, she said: “We have to involve different parts of the society, from the private sector, public sector, NGO, the government to the banking industry. We need to work together.”

Sara Cardoso, a postdoctoral researcher at USJ’s Institute of Science and Environment (ISE), talked about the dangers of microplastics (plastic less than 5 mm in length) to the environment, marine organisms and humans. “Microplastics have the potential to impact human health through the consumption of contaminated marine products,” she pointed out.

Among the things that can be done in the wake of increasing microplastics-related issues, she said, are enforcing and strengthening relevant legislations, further investments in waste management infrastructures, as well as more research, including to develop non-toxic biodegradable plastics which can be as “durable as synthetic plastics” but can be decomposed by living organisms like microbes.

“Plastic pollution has gone beyond just polluting the environment,” said Saidu, who pointed out that it has affected many aspects of people’s lives.

However, in order for the option of bioplastics to be readily available for the general public, “more research is needed for large-scale and cheap recovery processes of bioplastic from bacteria,” he added.