United Citizens Association comes out ahead in elections Link copied

Turnout of 42% was the lowest since the establishment of the MSAR, while 2,000 votes were invalid. After all the candidates of three electoral Lists from the “pro-democracy” camp were disqualified by the Legislative Assembly Electoral Affairs Commission in early July, candidates from the “pro-establishment” camp were the major winners of yesterday’s direct election. 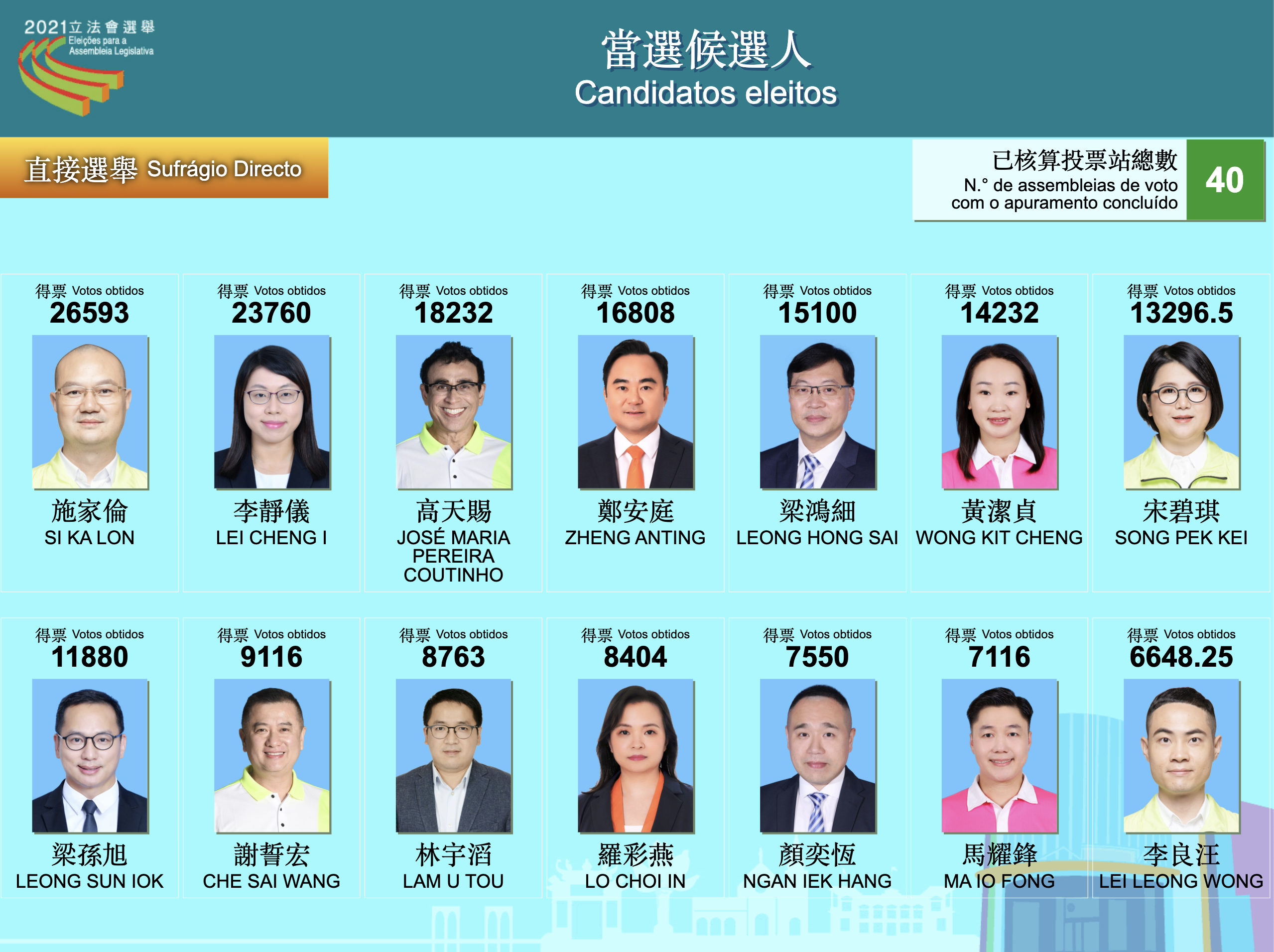 The three “pro-democracy” Lists and two other Lists were disqualified for failing to uphold the Macao Basic Law or having been disloyal to the Macao Special Administrative Region (MSAR). Consequently, only 14 Lists, which fielded 126 candidates, were running in yesterday’s direct election.

Yesterday’s direct election recorded the lowest number of candidacy Lists since the establishment of the MSAR, which held its first direct and indirect Legislative Assembly elections in 2001.

As a result, the 14 lawmakers elected yesterday only came from seven candidacy Lists, with one List winning three seats and one List garnering just one seat, while the other five Lists each won two seats.

Chan did not seek re-election four years ago.

The ACUM List has been set up by the Alliance for Common People Building Up Macao (API) – one of the city’s biggest community associations, which is generally regarded as representing the city’s sizeable Fujianese community. According to some estimates, Fujianese account for about one-quarter of the local resident population.

The final result of yesterday’s direct election was announced shortly after 2 am today.

It has been rare for a candidacy List to win three directly-elected seats.

In yesterday’s direct election, the ACUM List garnered the highest number of votes, at 26,593, enabling three of its candidates to be elected.

The Union for Development (UPD) List, headed by incumbent lawmaker-cum-unionist Ella Lei Cheng I, 40, won the second highest number of votes, at 23,760, enabling Lei and her fellow legislator-cum-legislator Leong Sun Iok to be re-elected.

The UPD List is the electoral vehicle of the Macao Federation of Trade Unions – one of the city’s biggest community associations. The List has won one or two seats every direct legislative election since it first took part in 1992, when Macao was still under Portuguese administration.

Both Ella Lei and Leong are Gung Luen senior board members.

Incumbent lawmaker José Maria Pereira Coutinho, who has been a directly-elected lawmaker since 2005, succeeded in his re-election bid yesterday. In addition, the New Hope List headed by Coutinho, 64, won two seats yesterday, so its number-two candidate Che Sai Wang, 55, a public servant, was elected for the first time yesterday. Coutinho heads the influential Macao Civil Servants Association (ATFPM). His group had also won two seats in the 2013 election.

Incumbent lawmaker Zheng Anting, 47, who has been a directly-elected legislator since 2013, also succeeded in his re-election bid yesterday. This time Zheng headed the Macao-Guangdong Union (UMG) List as incumbent lawmaker-cum-building contractor Mak Soi Kun did not seek re-election. The List’s number-two candidate this time Lo Choi In, 48, a senior bank executive, was elected as a lawmaker for the first time.

This time, the Progress Promotion Union (UPP) List, the electoral vehicle of the influential Macao General Union of Neighbourhood Associations (commonly known as Kai Fong in Cantonese), won two seats, enabling Leong Hong Sai, 54, and Ngan Iek Hang, 37, to be elected as lawmakers for the first time. Incumbent lawmaker-cum-banker Alan Ho Ion Sang, who had headed the UPP List since the 2009 direct election, did not seek re-election. Alan Ho was elected as an indirectly-elected lawmaker yesterday.

Also, this time, the Alliance for a Happy Home List, the electoral vehicle of the Macao Women’s General Association, also won two seats. Consequently, incumbent lawmaker-cum-nurse Wong Kit Cheng, 39, was re-elected, and the List’s number-two candidate Ma Io Fong, 37, a teacher by profession, was elected as a lawmaker for the first time.

The Power of Synergy List, which was running in the direct election for the second time after almost winning a seat four years ago, won one seat yesterday, because of which current affairs commentator Ron Lam Tou, 40, was elected as a lawmaker for the first time. The Power of Synergy List was the only List that won one seat in yesterday’s direct election.

Agnes Lam, the only incumbent lawmaker who failed in her re-election bid yesterday, was first elected in the direct election four years ago after she had failed in her first and second election bids in 2009 and 2013.

Agnes Lam Iok Fong, 49, is an associate professor at the University of Macau’s Department of Communications. Lam, a former journalist, has headed the Civic Watch List since 2009.

The voter turnout was 42.38 per cent yesterday (137,279 voters), the lowest turnout since the establishment of the Macao Special Administrative Region in 1999. A total of 3,141 votes were blank, while about 2,000 were invalid, according to the Electoral Affairs Commission, The Macau Post Daily reported.