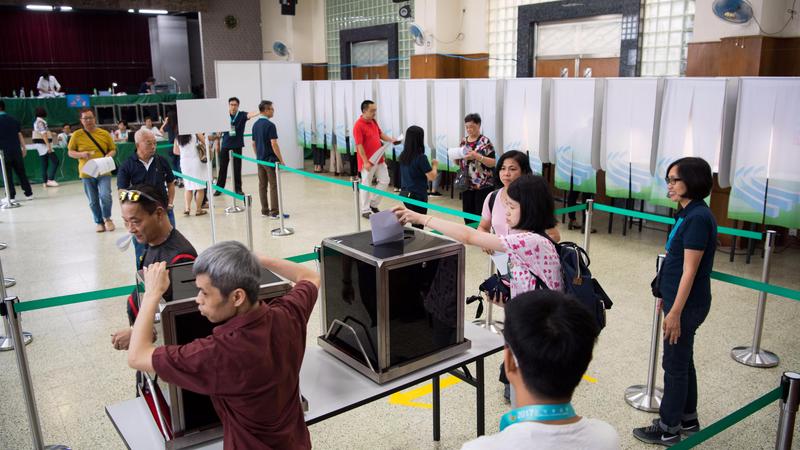 People at a polling station in Macao in 2017, voting for the sixth legislative election - Photo by China Daily HK
13 May 202113 May 2021 STAFF REPORTER

Residents will be able to cast their votes at 36 polling stations at this year’s elections, the same number as in 2017, although four will be in new locations.

Legislative Assembly Electoral Affairs Commission President Tong Hio Fong cited the example of the Macau Forum complex in Zape which needed to be replaced as it is being used as a nucleic acid testing station and vaccination centre.

The Macau Forum complex polling station will be replaced by Santa Rosa de Lima English Secondary School – which is located in Avenida do Dr. Rodrigo Rodrigues in Zape.

Tong also said that his commission has decided to replace Santa Teresa School in Ilha Verde with São José Diocesan No. 5 School in Toi San, with the aim of making polling stations more evenly distributed for voters in the Ilha Verde and Toi San neighbourhoods.

About 320,000 permanent residents will be eligible to vote in this year’s direct election, an increase from the about 307,000 voters in the 2017 election, The Macau Post Daily reported.

Tong also noted that Coloane has a population of 32,000 but only 6,200 voters are registered as having their home address there, which would indicate  that many voters who have moved to new homes there have still not changed their address in their electoral registration.

Tong also suggested that voters can check whether their address registered in their electoral registration is the one where they are currently living, despite not having moved to a new home, with the aim of ensuring that they will receive their voter notification letter before the election.

The direct and indirect Legislative Assembly elections will be held on Sunday, 12 September.

Voters can change their address via the website of the electoral registration (www.re.gov.mo).

Meanwhile, Tong revealed that two of the four groups, which had submitted registered voters’ signatures endorsing their respective candidacy, have withdrawn from taking part in the election. These two groups are the Macau Power of Gaming Association, and the Macau Common Home Alliance.