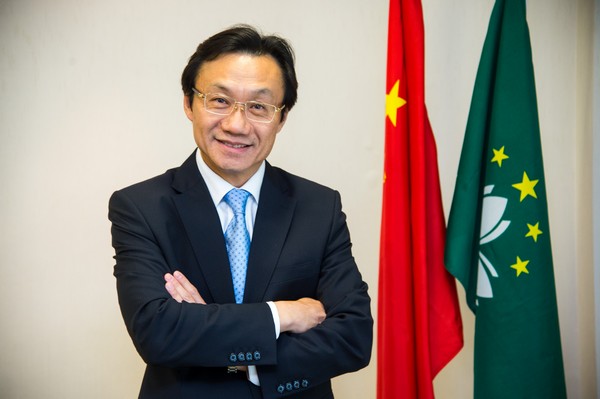 The Secretary for Social Affairs and Culture hailed the improvements in staffing at major hospitals in his first year in office and praised the cultural legacy given to the city by the Portuguese.

Alexis Tam Chon Weng has a wide brief, with the four main sectors of medicine, education, culture and leisure. The Secretary has set short-, medium- and long-term objectives for these areas. “Our success and failure will be judged by people in the future — ‘those before us plant trees, those after us enjoy the cool’,” he said in a recent interview with Exmoo News.

On medicine, Tam spoke of the “glorious five”. In the first year of his term (2015), he oversaw the hiring of 529 medical personnel. Add to that the 62 hired in 2014 and this makes a total of 591. “All were hired through a public recruitment process, fair and just,” he said, responding to criticism that he has taken medical talent from Kiang Wu Hospital. “It is a free labour market. People have high expectations (for their jobs), which is very normal. Staffing is still insufficient. We will continue to hire.”

Thanks to the new hiring, the service time of four departments – cardiology, orthopedics, physiotherapy and imaging diagnosis – was extended. He said that this would also happen this year at four more departments – ophthalmology, oncology treatment, cosmetic surgery and general medicine. “At the Centro Hospitalar Conde de Sao Januario, waiting times at specialist clinics have been greatly reduced – 50 per cent at the cardiology clinic, 30 per cent at orthopedics and physiotherapy and 80 per cent at imaging diagnosis.”

Culture heritage is another important part of Tam’s responsibility. He praised the work of the Portuguese colonial government in this area. “Very thankful to it for leaving behind the policy of preserving heritage and for today Macau’s (mixed ) East and West culture. This (heritage) is most important for Macau’s status in the world. I am very proud of it,” he said. “If you demolish everything (like Hong Kong), it would be really awful. As long as Macau can preserve well (its heritage), there will be hope.” He stressed that there should be no contradiction between urban renewal and preservation, adding that, with the right balance, the city would have vitality.

Tourism is one of Tam’s responsibilities. Each year more than 20 million mainland visitors come to Macau, testing the city’s ability to absorb them. They come not only for gambling but also to see the monuments left by the colonial government.

At the end of last year, the Chinese government ranked Macau as the second city nationwide with a distinct character, after Lhasa. “I was very happy to hear the news. Considering gambling revenue and the VIP business have been falling, but we succeeded in tourism, with no drop in numbers.”

Tam added that 49 cities all over the country can send individual travellers to Macau. The question is that there are 300-county level and another 300 local-level cities. One average county-level city alone has several million people. “Even the central government is concerned that Macau might not have the capacity to deal with it (the massive influx of mainland tourists).” The most effective solution is to pick cities with strong consumption power to promote individual tourism; Inner Mongolia is one example.

Tam is a success story of a ‘Macau boy’. After graduating from Pui Ching Middle School and university, he was one of a first group chosen by the colonial government to study in Portugal with a scholarship. His subjects were Portuguese and the economy of Europe. During his four years there, he not only completed his studies but also found his wife.

He returned to Macau in the late 1980s, when few Chinese held administrative post in the government. He joined the Statistics and Census Service (DSEC); he has spent 30 years in government.

He works a 12-hour day but finds time to jog 20 minutes a day and play tennis with friends at weekends.

He has two daughters. The elder, 18, is studying medicine in Lisbon; the younger, 16, is studying at a secondary school in the same city. To ensure that they do not forget their Chinese roots, they spend time every year in Beijing studying Mandarin. Last Christmas, he and his wife went to Lisbon for a reunion with their daughters. “I haven’t had a holiday for a long time,” he sighed.