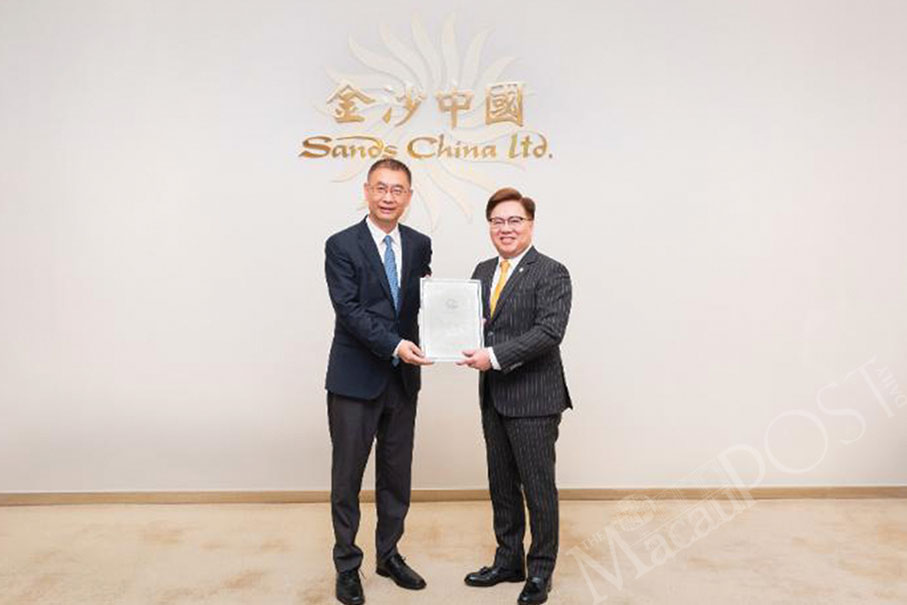 The Central People’s Government Liaison Office in Macao Thursday presented a certificate of appreciation to Sands China for its support of Covid-19 relief efforts in the mainland and Macao, the US gaming operator said in a statement.

According to the statement, a delegation headed by Yao Jian, a deputy director of the office, was received by Sands China President Wilfred Wong Ying-wai and other senior executives at the company’s office.

The statement said that both sides exchanged views and ideas on how to support the anti-pandemic efforts of the central and local governments, as well as how to revive Macao’s economy.

According to the statement, “Yao acknowledged the contributions made by Sands China amid the Covid-19 pandemic, and praised the company for its support of relief efforts in mainland China and Macao.”

During the visit, Yao’s delegation “presented a certificate of appreciation to Sands China, and expressed its hopes that the company will continue to cooperate with the [MSAR] government in its [novel corona]virus prevention and economy recovery work, while at the same time strengthening the patriotic spirit of its team members.”

The statement quoted Wong as saying that “Sands China considers it our privilege and duty to help the mainland and Macao persevere through the challenges brought on by the current pandemic,” adding that “under the guidance and leadership” of the central and local governments, “we will continue to work together to safeguard the local community, thereby contributing to the gradual recovery of Macao’s economy.”

The statement noted that Yao’s delegation included several officials from the Economic Affairs Department of the Liaison Office such as Director-General Chen Guokai and Director Zuo Xianghua.

The statement pointed out that Sands China announced in early February that it would donate MOP 20 million (US$2.51 million) to support the anti-pandemic work in the mainland, while it allocated an additional MOP 5 million to support epidemic prevention in Macao.

The statement also noted that Sands China has donated over 650,000 relief items to the local government and civic associations, apart from providing pecuniary aid for 500 households in dire straits and making donations to 34 local retirement homes and drug rehabilitation centres, benefiting some 110,000 people in needs.

Some of the relief items have been donated to those staying for 14 days in quarantine at a section of the Sheraton Grand Macao Hotel booked by the Macao government as part of its anti-epidemic measures, according to the statement.