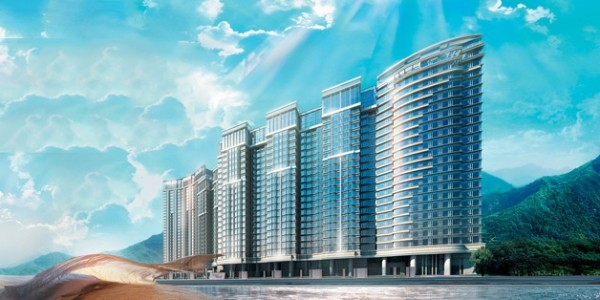 Chinese Estates Holdings said in a statement Wednesday that its wholly owned subsidiary Moon Ocean “may lodge an appeal” if the local government decides to invalidate a land concession near the local airport where the company is constructing the La Scala luxury residential development.

The company headed by Hong Kong property tycoon Joseph Lau Luen-hung also said in the statement to the Hong Kong Stock Exchange that it had applied for the resumption of trading of its shares this morning, following their suspension from trading Wednesday morning.

Wednesday’s suspension came after the Macau government said in a statement on Tuesday that it would not rule out seizing the five plots of land where the company is building the La Scala project.

The government’s statement came after the Court of Final Appeal (TUI) said last week when finding disgraced ex-secretary for transport and public works Ao Man Long guilty of nine additional counts of bribery and money laundering that Lau had paid a HK$20 million bribe to Ao to win development rights to the five plots of land.

According to The Macau Post Daily, a lower court had announced earlier that Lau and his business partner Steven Lo Kit-sing would have to stand trial in Macau for their alleged involvement in the Ao mega-corruption scandal. Both Lau and Lo have vehemently denied the allegations, insisting that the HK$20 million was a “consultancy fee” paid to a company owned by Ao.

In last night’s statement, Chinese Estate Holdings said that it had been advised by its legal advisor in Macau that if the local government eventually decides to invalidate the approval of the transfer of the concession of the five plots of land to Moon Ocean, the latter “may lodge an appeal against that administrative action in the Administrative Court of Macau within 30 days of the pronouncement of the decision.”

The Macau government said in its statement on Tuesday that “regarding the sale and transfer of the five plots of land conducted illegally, the government will await the court’s confirmation early next week of its earlier ruling … [before] initiating relevant measures as soon as possible.”

The government also said that “it will not rule out the possibility of deeming the sale and transfer of the five plots of land to be invalid.”

The company also said that as a result of the revised land concession it had “invested substantially in the La Scala project and pre-sold units to some 300 purchasers, most of whom, the company believes, are innocent and bona fide purchasers for value without notice, and many of them are Macau residents.”

Lau’s company also said that so far 304 La Scala units have been presold, with total contract sales amounting to about HK$3.8 billion, “of which cash deposit of around HK$384 million was received.”

Ao was arrested by CCAC officers in December 2006. After three graft trials, the former policy secretary is serving a combined jail term of 29 years – one year short of the 30-year maximum allowed in Macau.

According to the Commission Against Corruption, Ao’s case involves at least 800 million patacas in bribes and other ill-gotten gains. Ao became policy secretary in December 1999, coinciding with the establishment of the Macau Special Administrative Region (MSAR). (macaunews)