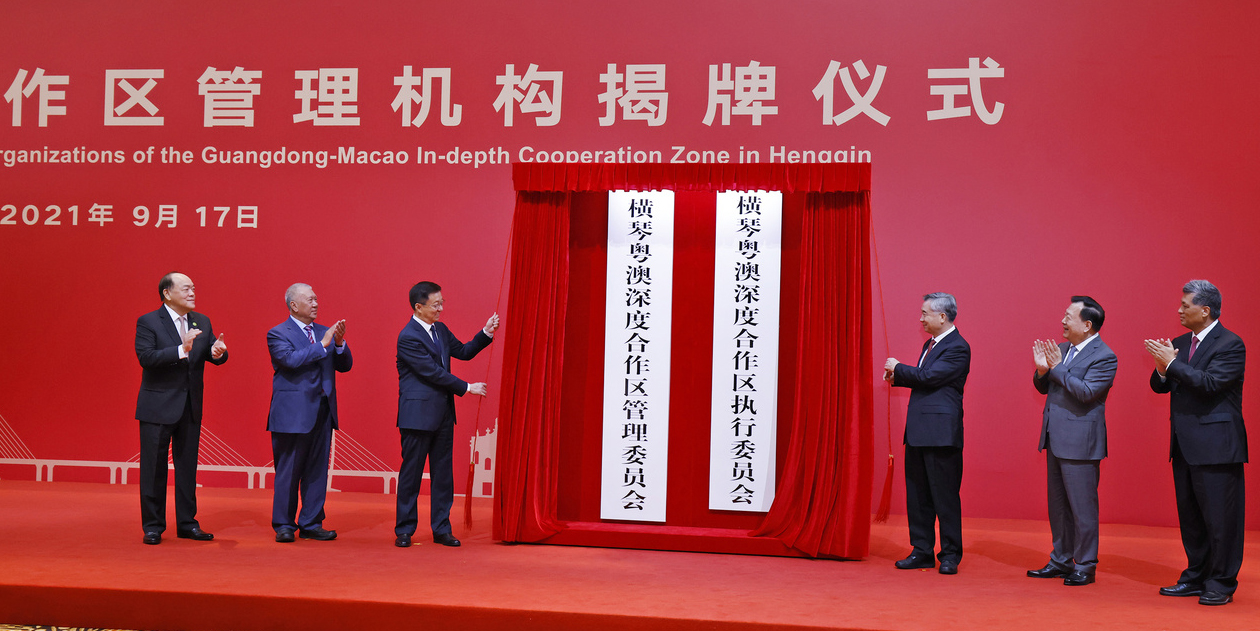 Chief Executive Ho Iat Seng said today that the Guangdong-Macao In-Depth Cooperation Zone will create a new development model with Chinese characteristics that will emphasise the advantages of “two systems” to promote the integration of Hengqin and Macao.

Ho was speaking during the inauguration of the zone in Hengqin in a ceremony attended by high ranking Chinese officials including Deputy Prime Minister, Han Zheng, the Secretary of the Guangdong Provincial Committee of the CCP, Li Xi and the Governor of Guangdong Province, Ma Xingrui.

The Chief Executive said that the new plan is an innovative initiative to enrich the principle of “One country, Two systems”, which will inject new dynamics, provide new space and create new opportunities for Macao’s long-term development and at the same time contribute to the social well-being of residents and to Macao’s long-term integration into the national development.

According to a statement released by the Government Information Bureau, Ho said that the ceremony marks the beginning of the construction of the In-Depth Cooperation Zone and the beginning of the process of development and opening of Hengqin in a new phase with a joint management and sharing of results between the two sides.

The Chief Executive also said that the zone will provide a high-quality living space and make everyday life easier for Macao residents, and create an environment conducive to life and work similarly to Macao’s.

“Major industrial projects will be mapped out to facilitate the formation of innovative and technological platforms. New technologies, new industries, new ecologies, new models will be developed in order to create impetus for the sustainable development of Macao’s economic diversification,” the chief executive stated.

The Master Plan of the Development of the Guangdong-Macao Intensive Cooperation Zone in Hengqin was published by the Central Government on 5 September.

According to the Master Plan, Guangdong and Macao will jointly form an administrative committee, as a development and management body to coordinate and make decisions on major issues for the zone.

The administrative committee is under the leadership of the Leading Group for the Development of the Guangdong-Hong Kong-​Macao Greater Bay Area and will be run under a dual-director system, meaning it will be jointly led by the Governor of Guangdong Province and the Chief Executive of the Macao Special Administrative Region.

Macao Secretary for Administration and Justice Andre Cheong Weng Chon, has been appointed as the administrative committee Executive Deputy Director.

Secretary for Security Wong Sio Chak and Secretary for Social Affairs and Culture Elsie Ao Ieong U will serve as Deputy Directors, together with Guangdong Vice Governors, Lin Keqing and Zhang Xin, and Secretary of the CCP Zhuhai Municipal Committee, Guo Yonghang.