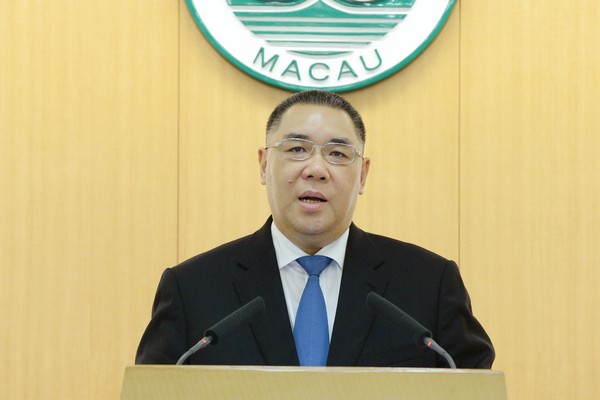 Chui said he was happy to be able to announce that Secretary for Transports and Public Works Raimundo do Rosario had informed him that the government had finally been able to reach an amicable agreement, after two years of negotiations, with the LRT depot contractors.

In addition, Chui said that, according to Rosario, the construction contract for the second stage of the new prison in Coloane had already been signed. He also said that the long-delayed Pac On Ferry Terminal was finally expected to be completed by the end of the year, while the test runs for the pier should begin sometime next year.

Chui also said that after Rosario had consulted experts and industry professionals, the government had decided to go ahead with a bridge for the fourth Macau-Taipa link, the design of which was expected to be completed by 2017.

A tunnel would have been an alternative solution, government officials said earlier this year.

The Chief Executive stressed that the city’s private real-estate prices are too high.

He also repeatedly promised that if there are plots of land available the government will reserve them for the construction of public housing flats as a matter of priority.

Chui mentioned in his 2016 Policy Address that the government will increase land supply for the construction of public housing flats including five plots in various locations such as Ilha Verde, Fai Chi Kei, the northern district and Taipa. He said that one will be located on a plot currently being reclaimed from the sea. About 4,000 public housing units will be built on the five plots, according to Chui.

Reporters repeatedly asked Chui about the government’s public housing plans, particularly the construction of HOS flats, and what the government would do to tackle the private property market’s high prices which are unaffordable to most residents.

“To be honest …property prices nowadays [in the private sector] are high… the high price of property affects [residents’] lives,” Chui said.

He also promised that the government will consider setting aside any plots of idle land, if it has successfully repossessed them, for the construction of public housing.

Asked by reporters whether the government would promise when and how many times it will accept HOS applications, Chui merely said he was confident about the supply of public housing.

He also said the government would consider a “rent-to-buy” housing scheme for young residents.