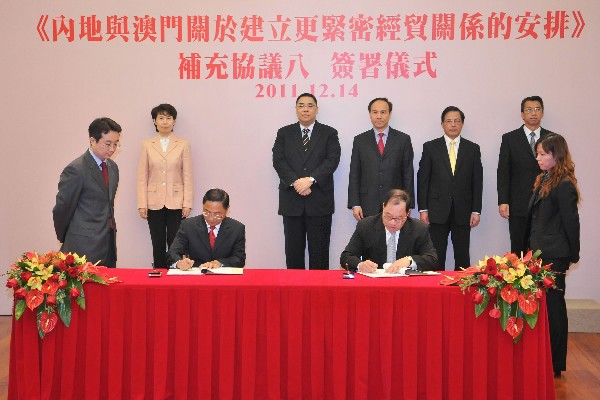 Tam and Vice Minister of Commerce Jiang Yaoping spoke in a joint press briefing at Government House after signing CEPA’s eighth expansion since 2004.

The latest supplement, which will be effective from April 1 next year, will add inter-disciplinary research and experimental development services, services related to manufacturing, and library, museum and other cultural services to the current 43 service sectors covered by the cross-border deal, raising the total number to liberalised service sectors to 46, involving a total of 281 liberalisation measures.

As for trade and investment facilitation, market access conditions will be further relaxed in 10 existing sectors, including facilitation of e-commerce, inspection of goods, protection and intellectual property and innovation of science and technology.

Jiang said that the 36 support measures for Hong Kong announced by Vice Premier Li Keqiang earlier this year will also be applicable to Macau, adding that through CEPA, Macau would gain full liberalisation of trade in services as one of the goals set under the central government’s 12th Five-Year Plan.

Tam pointed out that the free trade pact has brought integrated bilateral trade in goods and services closer than ever before and as trade in services becomes fully liberalised as it has with trade in goods, Macau ’s market will be fully in line with the mainland’s.

Tam acknowledged that since developments in the EU and US could have an impact on mainland China ’s economy, Macau would adopt a more cautious attitude yet take practical measures when investing in the mainland.

Tam also said in his speech at the start of a joint meeting with representatives from the Ministry of Commerce from Beijing before the Supplement’s signing ceremony that while Macau ’s economy could expect a double-digit growth this year, the city’s economic development may slow down next year due to external influences. However, he was quick to add that economic growth would remain “positive”.

To help enhance the role of Macau as a regional business platform and global leisure hub, the two sides agreed to further strengthen co-operation in sectors of international banking and insurance services as well as co-ordination in the supervision of the tourism sector.

Jiang said the supplement signed Wednesday is a win-win situation for both sides to upgrade their service industries, adding that it would also help the mainland and Macau to achieve liberalisation of trade in services before the end of the 12th Five-Year Plan (2011-2015).(MacauNews/Politics)