Over 700 people including locals, mainlanders and expatriates took part in a candlelight vigil in Largo de S. Domingos Monday 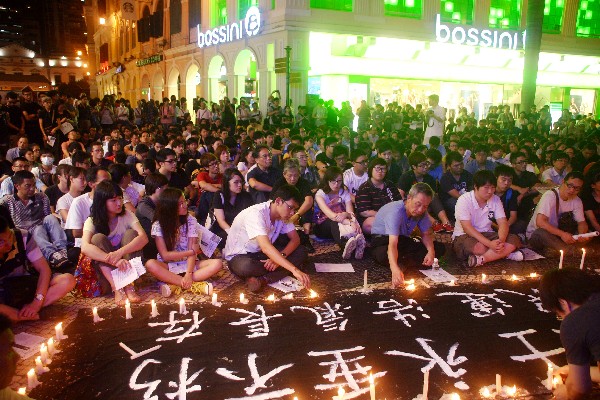 Over 700 people including locals, mainlanders and expatriates took part in a candlelight vigil in Largo de S. Domingos Monday night to mark the 23rd anniversary of the Tiananmen incident.

As usual, the vigil was organised by the grassroots Union for Democratic Development Macau (UMDD). At 8 p.m. participants started lighting candles and observed five minutes silence, as well as singing several songs in commemoration of the people who died in the incident in the capital’s main square on June 4, 1989.

During the vigil, Ng said the he had found more youngsters had joined the vigil and that made him strongly believe the incident would be readdressed in future.

The union has organised a candleligt vigil in memory of the incident since 1990, the year after it occurred.

Two hours later, participants gradually left the square. The organiser told the media after the event that over 700 participants had joined the vigil and that it was the highest number of people attending for almost 10 years. Last year, the organisers claimed that there had been about 300 participants attending the vigil.(macaunews)