Fifteen locals have been confirmed as candidates for election to the 12th National People’s Congress (NPC), which will be held 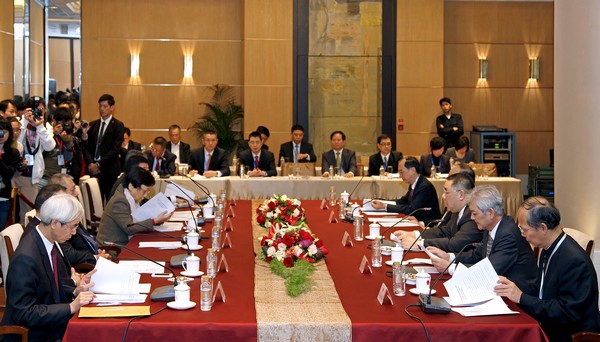 Fifteen locals have been confirmed as candidates for election to the 12th National People’s Congress (NPC), which will be held next Monday.

Leong Heng Teng, spokesman for the presidium overseeing the election, made the announcement after a meeting presided over by Chief Executive Fernando Chui Sai On, the presidium’s standing president.

During the meeting, according to Leong, the 11-member presidium confirmed 15 local residents as NPC election candidates.

Ex-lawmaker Leong also said at a press conference that a total of 16 locals had submitted applications for the election with 15 of them being confirmed, adding that one of the applicants failed to submit any nominations.

Leong said that the presidium would not arrange for the 15 candidates to present their political platforms and ideas to the public.

“I believe they [the candidates] will use different channels to present their political platforms and political ideas to the public,” Leong was quoted by The Macau Post Daily as saying, insisting there was no “pre-arranged” list of 12 candidates to be elected by the Electoral Conference members.

Kou Hoi In, Jose Chui and Ho Iat Seng are local legislators while Ho Iat Seng is the only local member of the NPC Standing Committee; Paula Ling is a lawyer; Lok Po is the editor-in-chief of the influential Chinese-language daily Macao Daily News; Lionel Leong is a businessman and ExCo member.

The five newcomers are Ho Sut Heng, Mok Chi Wai, Gabriel Tong, Iong Weng Ian and Kevin Chan. Ho Sut Heng is a chairwoman of the Federation of Trade Unions (commonly known as Gung Luen) who also is a ExCo member; Gabriel Tong is a government-appointed legislator-cum-law professor; Mok Chi Wai and Kevin Chan are middle-aged businessmen, while Iong Weng Ian is a former lawmaker who is a key member of the Macau Women’s General Association (commonly known as Fu Luen).